TFL has taken on ownership of the SS Nomadic as part of their remit to protect and promote the maritime and industrial heritage of Belfast.  SS Nomadic is operated by Titanic Belfast Limited (TBL), Titanic Belfast's commercial operator.

In collaboration with Titanic Belfast Limited, it was recognised that there would be significant benefits in joining up the operations of both Titanic Belfast and the SS Nomadic; advancing the development and promotion of Titanic Quarter as an authentic and international maritime heritage destination; and to engage, and to continue to educate and maximise opportunities for local communities across Belfast and Northern Ireland to understand and share this heritage.

To achieve this TFL must ensure Belfast's maritime heritage is preserved for current and future generations to access and that Titanic Quarter becomes a shared space for the people of Belfast and Northern Ireland.

The SS Nomadic is the last remaining White Star Line ship anywhere in the world, an authentic piece of Belfast’s maritime heritage and the biggest Titanic artefact.

Designed and built by Harland and Wolff in 1910-11, the SS Nomadic has many of the same luxurious finishes as RMS Titanic, and is a quarter of the size.

Built to be a tender ship for the White Class Liners Olympic and Titanic, Nomadic took passengers, luggage and ships’ stores to and from the liners when they were moored off ports that weren’t deep enough to accommodate them. The ship was launched in April 1911, capable of carrying 1000 passengers segregated into First, Second and Third Class accommodation. Nomadic was sent to Cherbourg in June 1911 to commence tendering duties, and in 1912 transported 274 passengers out to RMS Titanic when it docked there in April.

Since then Nomadic has had a varied career, and saw active service in both World Wars as a troop carrier. Nomadic also carried thousands of passengers out to the world’s great liners in Cherbourg, including the Queen Mary and Queen Elizabeth, before spending decades in Paris as a floating restaurant and party venue.

In 2005 Nomadic was languishing in Le Havre when local enthusiasts became aware of its plight, and began a campaign to ‘Save the Nomadic’ from scrappage.

The Department for Social Development stepped in and bought Nomadic in 2006, bringing it home later that year. The Nomadic Charitable Trust was set up to oversee its restoration and conservation, and the ship opened to the public in 2013.

Once opened, the Nomadic Charitable Trust recognised that they shared the same objectives as Titanic Foundation Limited and agreed that they would transfer their assets over and subsequently wind up to create greater operational synergies and sustainability across Titanic Quarter.

Titanic Foundation, the charity set up to preserve and promote Belfast maritime and industrial heritage, including the development of Titanic Belfast, are pleased to announce the appointment of a new Chair and two new Trustees to their Board.

Welcoming her appointment, Marie-Thérése said: “I am thrilled to be able to help Titanic Foundation achieve its inspirational and ambitious plans and push forward into our next phase unlocking the true potential of Belfast’s iconic heritage waterfront. Creating a seamless, accessible and vibrant destination for both local people and visitors to the city.”

Last year, Titanic Foundation saved and restored one of the rarest lighthouse optics in the world, now publicly displayed on Belfast’s waterfront, an early win as they prepare plans to scale up public realm and animation as part of our ‘Maritime Mile’ ambitions. None of this would have been possible without their ability to work closely with their key stakeholders including Belfast Harbour Commissioners, the Northern Ireland Executive, Tourism NI, Belfast City Council, Titanic Quarter Limited and the National Lottery Heritage Fund.

In 2019, Titanic Foundation and Belfast Harbour Commission, in collaboration with Titanic Quarter Limited and the Odyssey Trust, completed a scoping study of the Maritime Mile – the stretch of water from Lagan Weir to the Thompson Dry Dock. Covering one navigational mile of water, but includes over 10km of accessible land-based waterfront, and is being regenerated through a series of masterplans and strategies. The Maritime Mile study recommended 17 projects that run across all these strategies, ensuring a well-connected and uniquely curated experience across the city’s historic waterfront.

Kerrie Sweeney, Chief Executive of Titanic Foundation, highlighted: “We are extremely grateful to the outgoing Chair, Nicky Dunn OBE, for her excellent leadership over the past 6 years, and we are confident that as she hands over to, Marie-Thérése, Titanic Foundation will go from strength to strength.   Looking ahead to 2020, it is an exciting period for us as we embark on a new chapter and begin to implement the exciting plans created for the Maritime Mile. Driving local community engagement, heritage interpretation and restoration projects, volunteer initiatives and promote the usage of Belfast’s historic waterfront.

There are exciting times ahead as we plan to reveal a vibrant new brand identity and logo, as we align with the wider geographical area and become the recognised delivery body for co-ordinating, promoting and delivering the Maritime Belfast experience.”

106 years after SS Nomadic was originally launched as a tender ship, it has experienced record visitor numbers as a tourist attraction.

Since Titanic Belfast took over operations of SS Nomadic in 2015, it has welcomed over 250,000 visitors. During this time, Titanic Belfast and Titanic Foundation, with support from Tourism Northern Ireland, have carried out a significant programme of investment to align and integrate SS Nomadic with the world class standards of Titanic Belfast. The venue is now well established for exclusive hire and has fully catered for events, ranging from private and corporate drinks receptions to fine dining for up to 200 people.

Titanic Belfast Chief Executive, Tim Husbands MBE, said, “In two years, SS Nomadic, the last remaining White Star Line vessel and largest Titanic artefact in the world, has been given a new lease of life. We are delighted with the increase in visitor numbers and events on-board, which showcase the sustainability of the ship. It is definitely now firmly established as one of Belfast’s favourite tourist attractions and one of its most authentic event venues with business and leisure tourists alike enjoying the space on-board and period features.”

Kerrie Sweeney, Chief Executive, Titanic Foundation, commented, “Linking both attractions together as one experience has proved extremely popular. Visitors enjoy exploring the nine interpretative galleries of our iconic attraction, Titanic Belfast but the highlight is touching and feeling the authentic heritage on board SS Nomadic, now positioned as the tenth gallery. This increase in visitors generates essential income to support the ongoing operations, maintenance and conservation of SS Nomadic and Hamilton Dock, preserving a significant part of Belfast’s maritime heritage for future generations.”

The SS Nomadic is now incorporated into the Titanic Belfast visitor experience, and is open to the public every day. Visit www.nomadicbelfast.com for details on planning your trip. 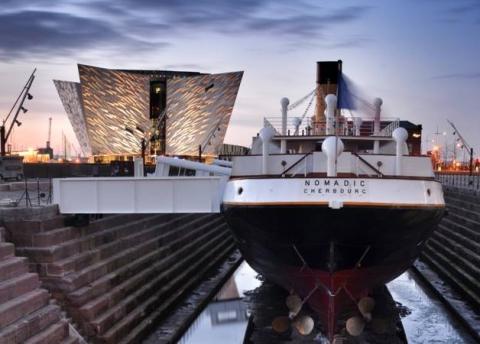