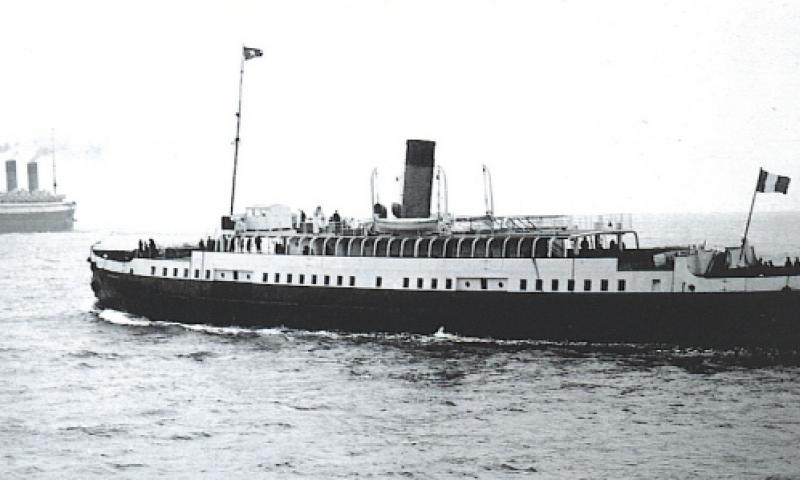 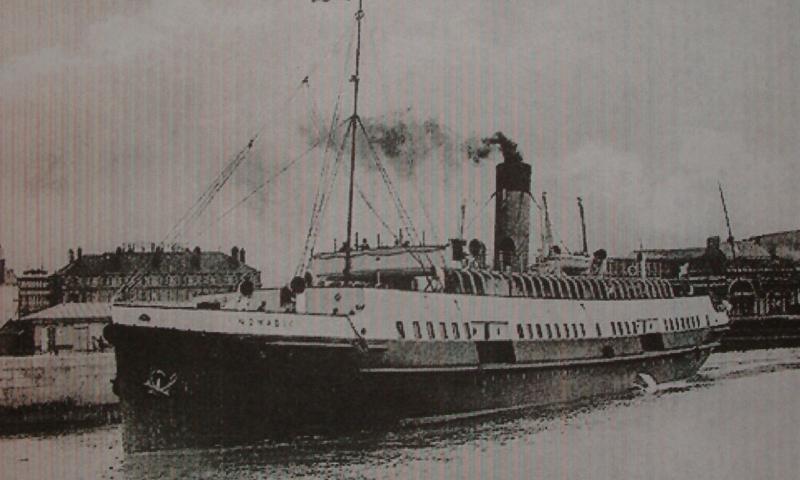 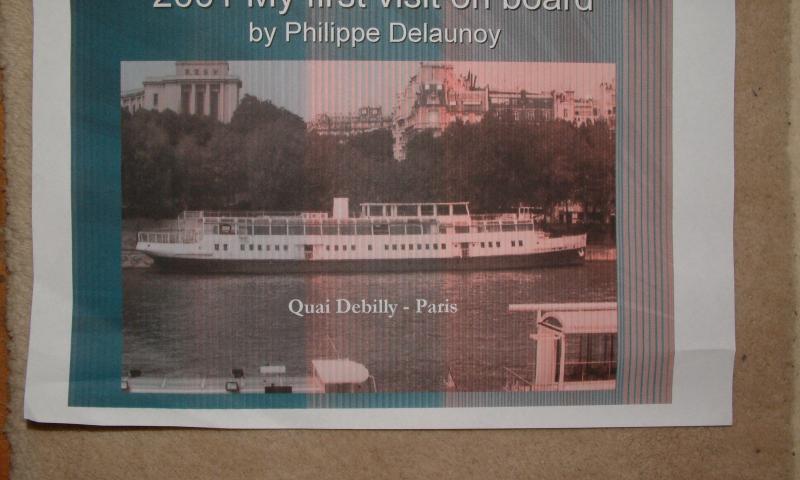 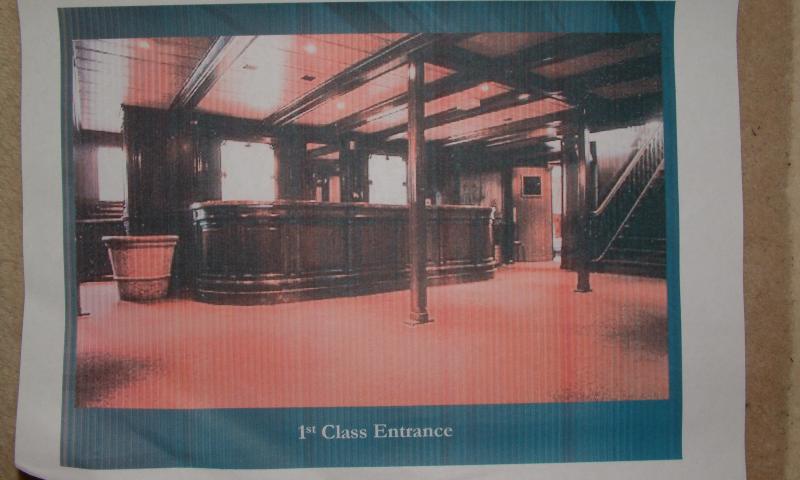 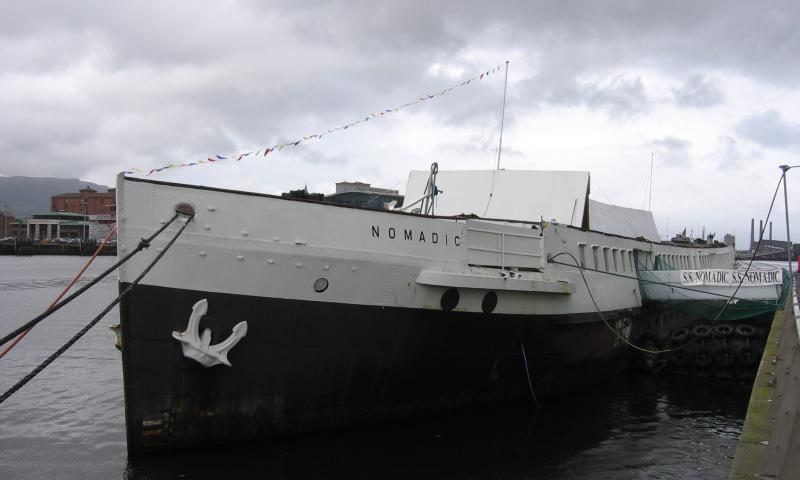 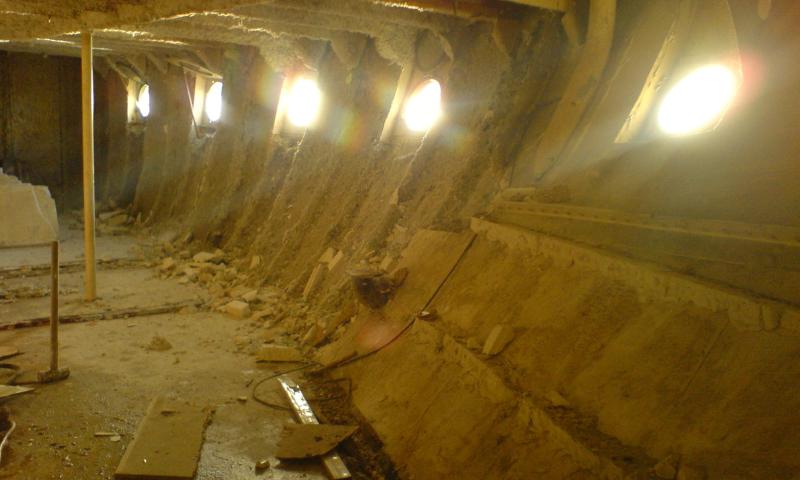 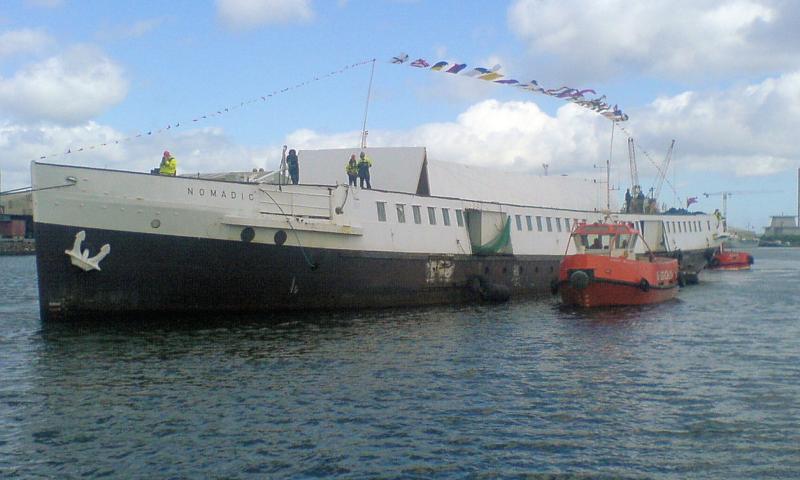 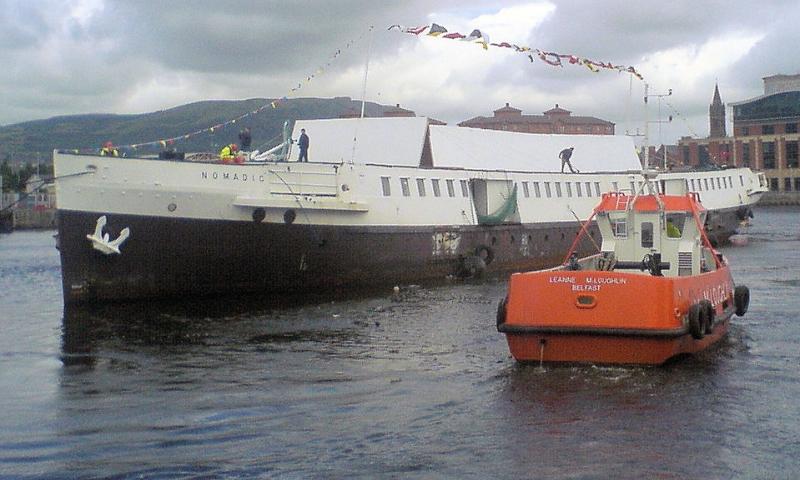 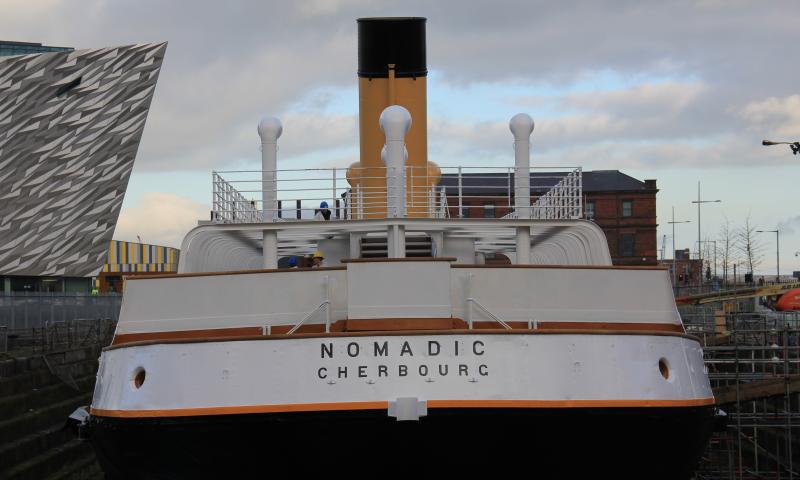 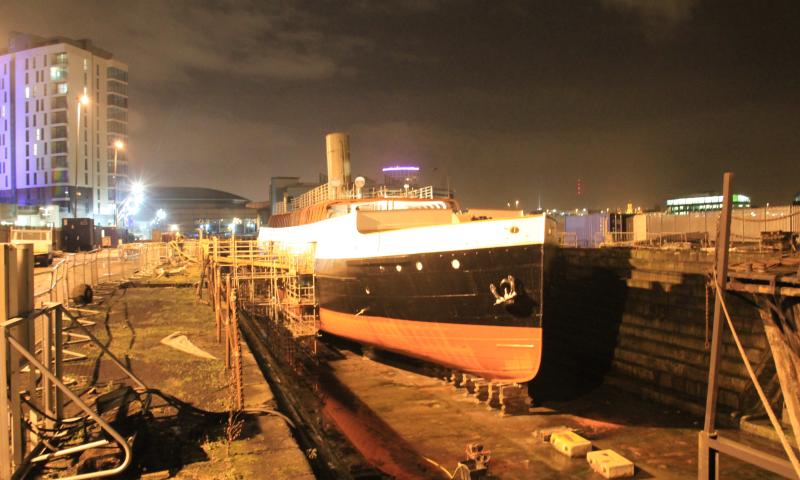 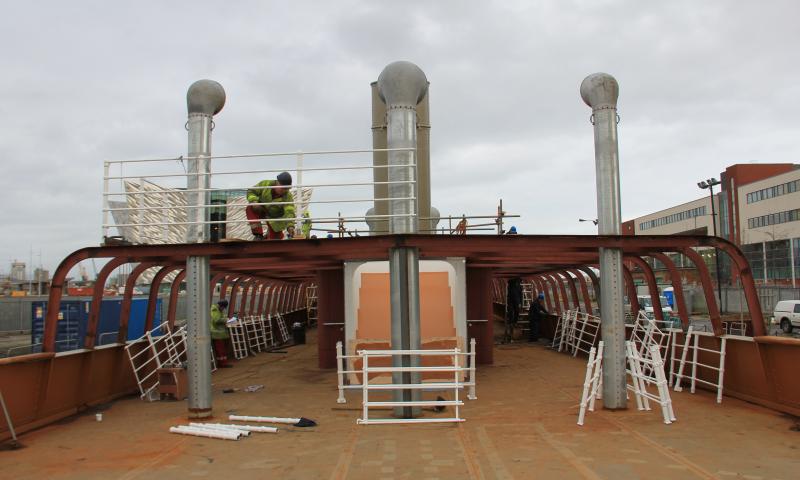 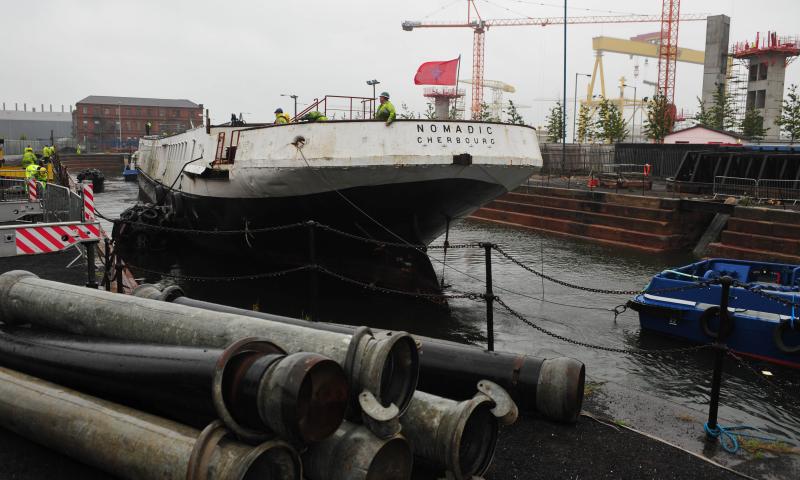 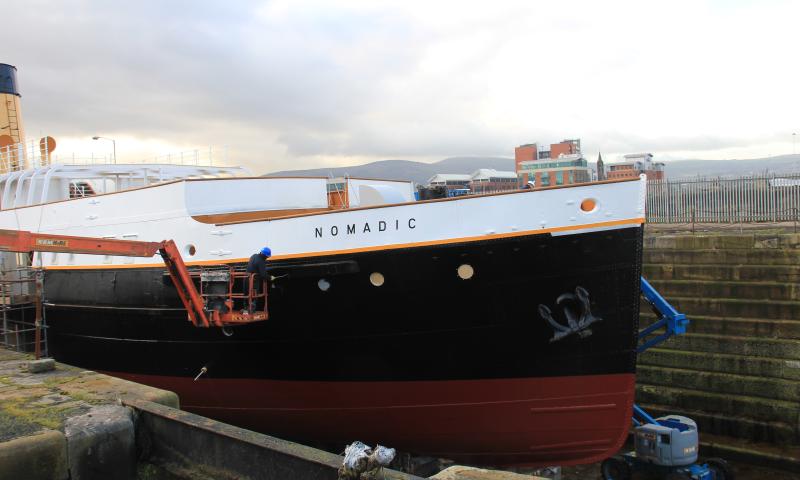 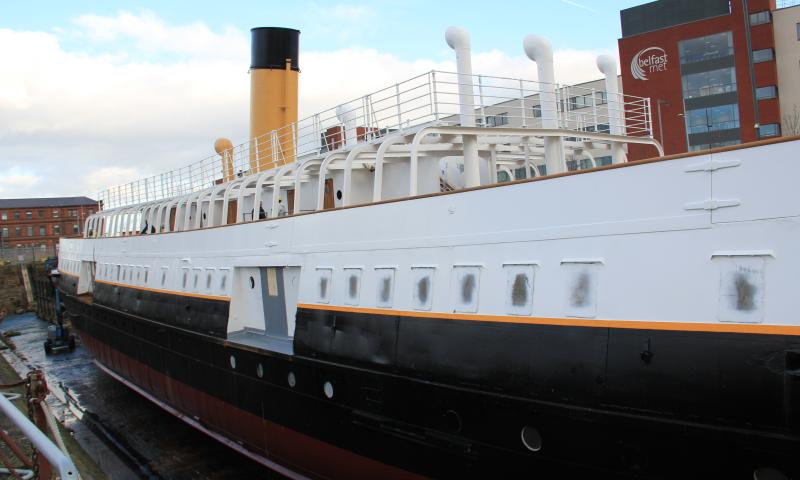 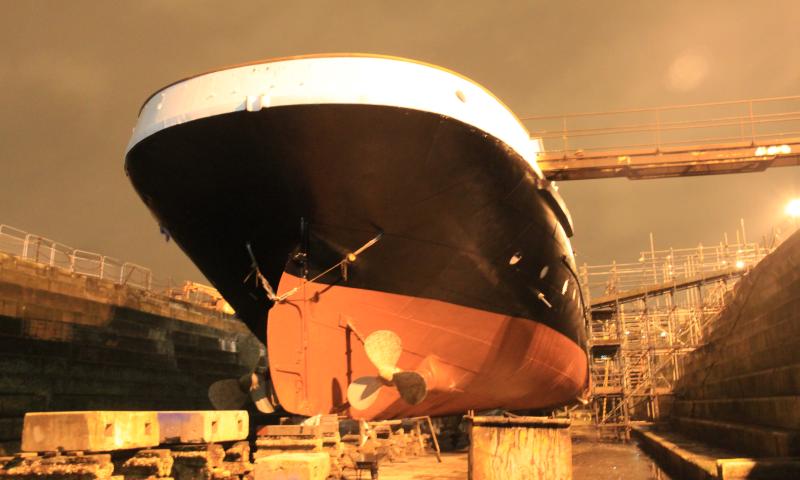 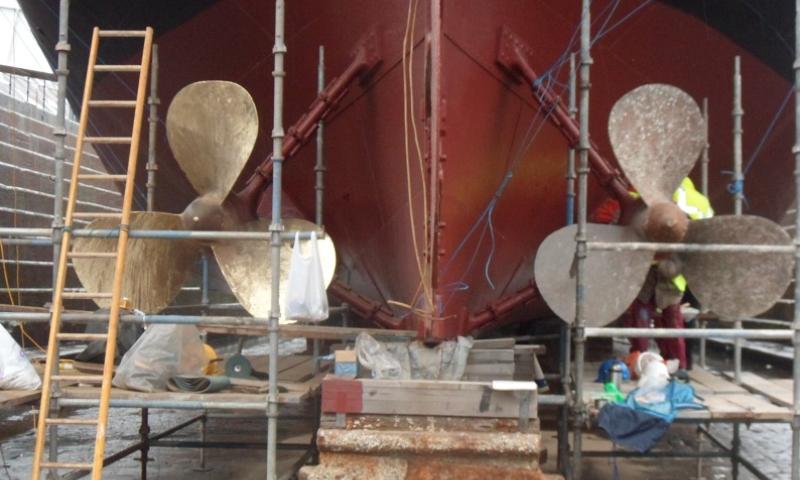 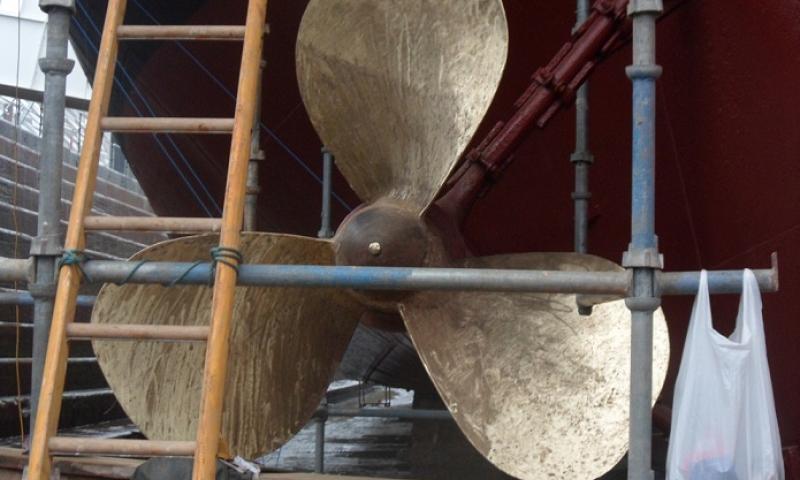 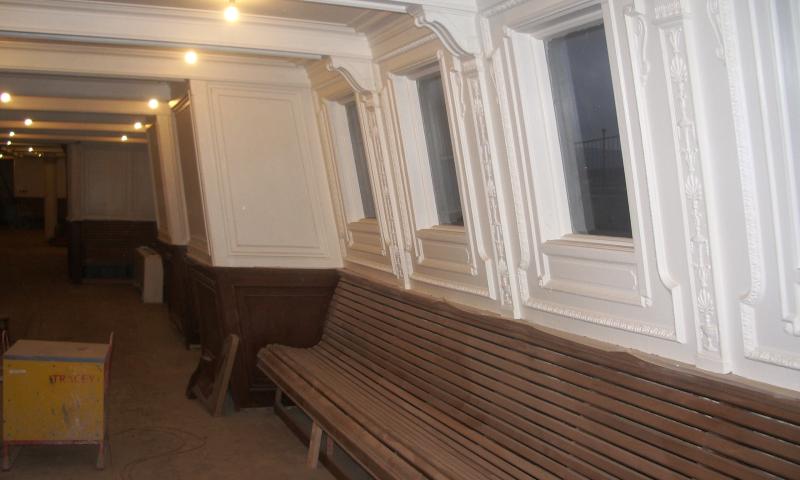 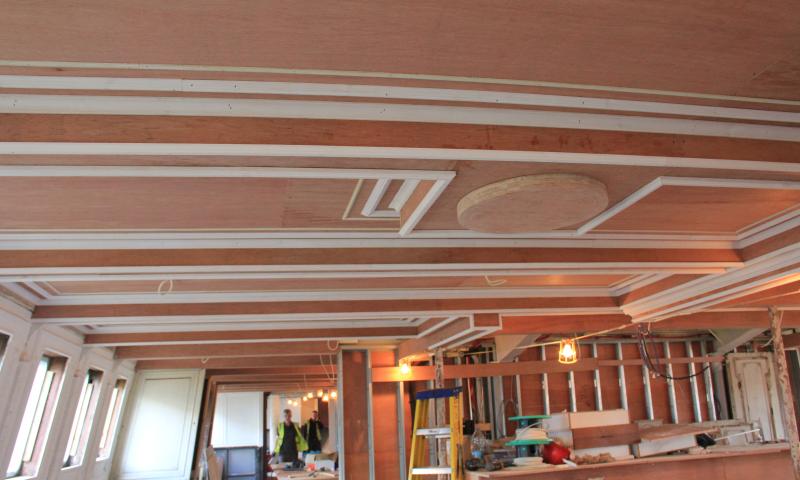 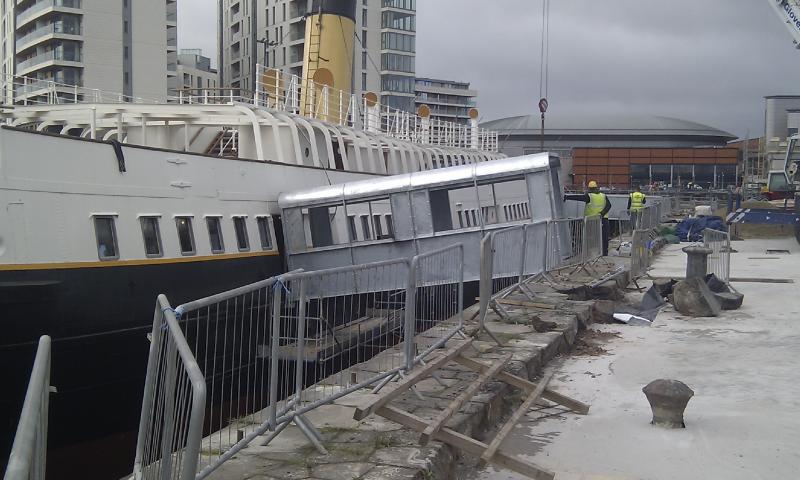 SS NOMADIC’s hull is of traditional open-floor riveted steel construction and she has timber decks.  She was fitted with two H&W built compound four cylinder steam engines with twin propellers which gave her a top speed of 12 knots. After her purchase in 1973 for use as a restaurant, extensive modifications were made including removal of the superstructure, funnel and engines. The flying bridge (part of the original design) and wheelhouse (added 1911-12) were some of the other items removed at this time, but these have subsequently been replicated, along with the funnel, engine casing and much of the accommodation.  Concrete ballast was installed along with a 100 seat auditorium and a dance floor. Many of the fixtures and fittings have been lost but some items survive, such as the original windlass, bollards, a fairlead roller and the aft deck capstan on deck. Internally, some key features include: original panelling in the first and second class lounges; doors to the first and second class entrance vestibules; third class stairs; and the lamp room.  The hold, chain locker and store also survive in their original form.  In 2009 a comprehensive conservation management plan was implemented. This included the cleaning and painting of the hull, the reinstatement of bulkheads and the replacement or repair of corroded frames. Decking, fixtures and fittings have been replaced on the upper, stern, front well and flying bridge decks following original drawings, and all interior lounges, hallways and toilets have been reinstated and refitted. Both the exterior and interior of SS NOMADIC have been fully conserved to their original appearance.  Only one original lifeboat survived and this was also salvaged and conserved.

SS NOMADIC is unique in that she is the last surviving vessel of the White Star Line in the world. She was built by the famous shipbuilding company Harland and Wolff and is now one of only three surviving vessels from this yard, being launched from slip number one, Queens Island, Belfast on 25 April 1911 (OLYMPIC was built on slip number two and TITANIC on slip number three). On 10 April 1912 she brought passengers from Cherbourg to RMS TITANIC on her ill-fated maiden voyage and is a surviving reminder of the famous ship. Over the years, she also carried many renowned personalities to trans-Atlantic liners and is now one of three surviving vessels built to serve as a passenger tender, only two of which are UK vessels.

SS NOMADIC played a part in both World Wars, being requisitioned by the Admiralty in 1917 to assist in the First World War ferrying American troops from the troop carriers to the shore. During the Second World War, she evacuated British soldiers and others from Cherbourg, and then spent the remainder of the war as a British coastal patrol vessel and minelayer. She has strong connections with France, being built as a tender for the port of Cherbourg and returning there after the war, to support liners including the QUEEN MARY and QUEEN ELIZABETH. Later she was moved to Paris and moored opposite the Eiffel Tower. There she became a floating restaurant until she was forced to move to Le Havre by the French authorities and sold.

NOMADIC is well documented and has been recorded on the National Register of Historic Vessels since 2007 as a member of the National Historic Fleet.

NOMADIC was designed for a specific role as a tender ferrying passengers to ocean liners moored off the French port of Cherbourg which was too shallow to accommodate them. She was built to carry 1000 passengers, 4 or 5 officers and 10 crewmen and had accommodation segregated into First, Second and Third Class accordingly. Much of the accommodation was removed in the 1970s during the conversion of the vessel for use as a restaurant, but the class structure has now been replicated as part of the conservation project, recapturing the grandeur of the first class experience and including key features such as the entrance staircases, foyers and lounges.  The individual cabins such as the captain’s cabin, ship’s office, mate’s cabin and galley have also been replicated giving an accurate feel of what it would have been like to work or take a passage on board.  NOMADIC has returned to the place where she was built and, as a static exhibit, serves to provide a practical illustration of the TITANIC story in Belfast.

With reference to the ss Nomadic conservation management plan.

SS NOMADIC was commissioned by the White Star Line as a tender to the ‘Olympic’ class transatlantic liners. The port at Cherbourg was too small to accommodate the Olympic class liners so two tender ships (SS NOMADIC and SS TRAFFIC) were stationed in the port, ready to rendezvous with the liners while they were at sea. The keel of SS NOMADIC (yard number 422) was laid by Harland and Wolff (H&W) in Belfast on 22 December 1910.

She was fitted with two H&W built compound steam engines which gave her a top speed of 12 knots. SS NOMADIC was launched from slip number one, Queens Island, Belfast on 25 April 1911 (OLYMPIC was built on slip number two and TITANIC on slip number three).

After the launch, she was fitted out in the Hamilton Graving Dock in the Abercorn Basin in Belfast and was delivered to White Star Line on 27 May 1911. Later in the same year, she sailed to Cherbourg to commence her duties. On 10 April 1912, NOMADIC delivered 142 passengers to TITANIC, including Sir Cosmo and Lady Duff Gordon and Benjamin Guggenheim. In the latter stages of World War One, NOMADIC was requisitioned and sent to Brest where she served as an American troopship. At the end of the war, she returned to Cherbourg where she continued to tend the transatlantic liners.

In 1927, White Star Line sold SS NOMADIC to the Compagnie Cherbourgeoise de Transborde-ment (CCT) and her intended career ended in 1934 when the new enlarged Port at Cherbourg was opened. She was then sold to The Societe Cherbourgeoise de Sauvetage et de Remorquage (SCSR) and renamed INGENIEUR MINARD. At the start of World War Two when France was under threat of invasion, NOMADIC evacuated British soldiers and others from Cherbourg and then made her way to Portsmouth where she was requisitioned by the British. She spent the remainder of the war in Government control as a coastal patrol vessel and minelayer and eventually returned to France for scrap. However, she was saved by the Manager of SCSR. In a twist of fate, the Port of Cherbourg had been destroyed and tender ships were once again essential. This time, she tended the likes of QUEEN MARY and QUEEN ELIZABETH.

This rejuvenated career ended on 4 November 1968. SS NOMADIC (whose original name had been reinstated) lay idle for five years. She was then sold to Mr Yvon Vincent who made extensive modifications to her including removal of the superstructure, funnel and engines and installed concrete ballast, a 100 seat auditorium and dance floor (which still remain). Many of the grand fixtures and fittings had gone missing by this stage. SS NOMADIC finally arrived in Paris on 17 October 1974 and moored opposite the Eiffel Tower. There she became a floating restaurant until she was forced to move to Le Havre by the French authorities. She was temporarily ‘listed’ by the French for one year and, following Mr Vincent’s death in March 2005, the French authorities requested NOMADIC be auctioned. However, the auction produced no bids.

At a later second auction held in Paris on 26 January 2006, she was bought by the Department of Social Development Northern Ireland (DSDNI) and transported back to Belfast on a barge. Restoration was due to be carried out and, pending this, NOMADIC was moored in the water at Queen Quay and then Barnets Dock in Belfast. In June 2006, Titanic Quarter Ltd and the Port of Belfast announced they would fund the refurbisment of the Hamilton Graving Dock to serve as a home for NOMADIC while she was being preserved and in 2009, she was moved there to complete a conservation management plan to move forward her restoration project