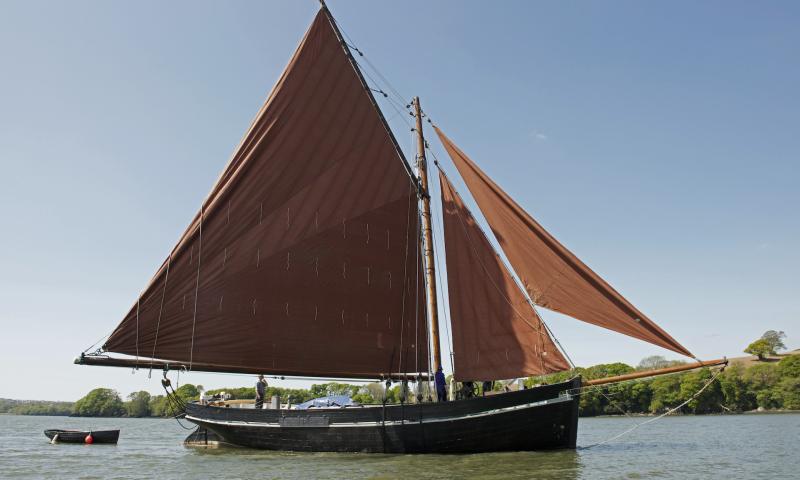 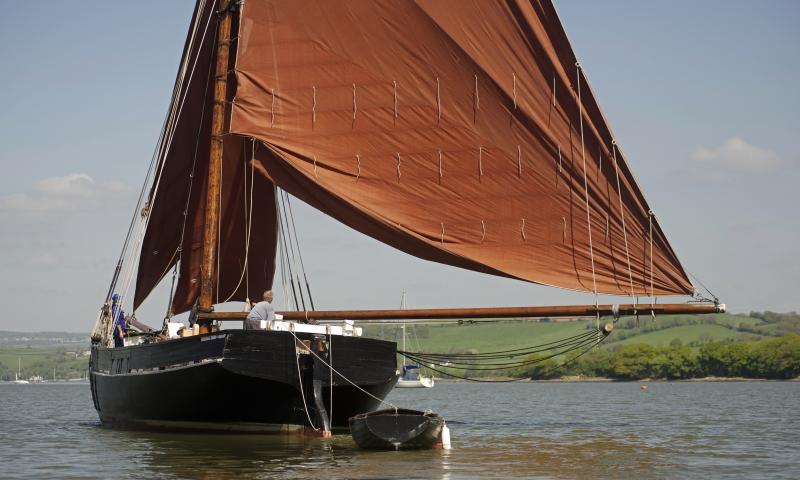 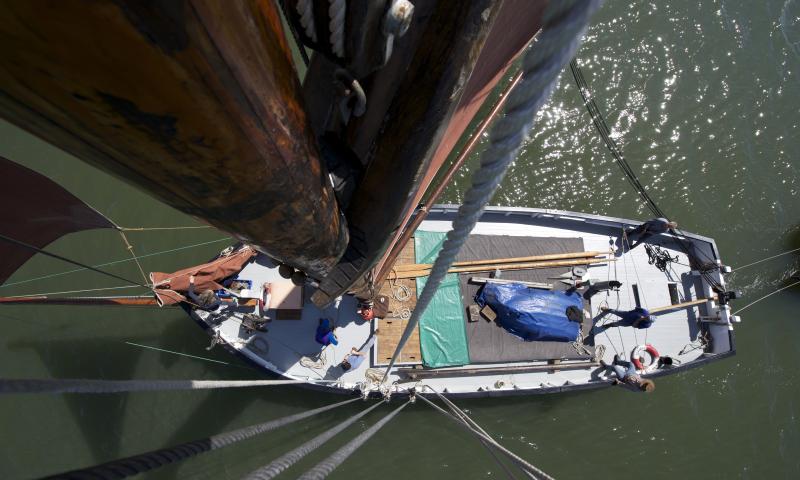 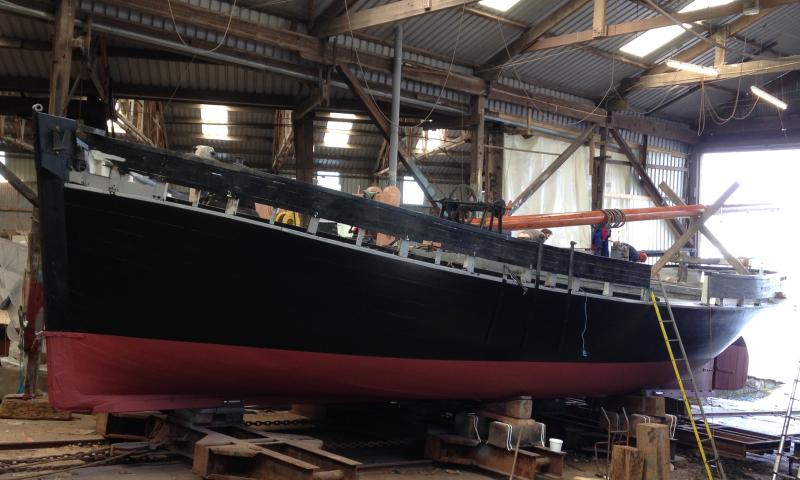 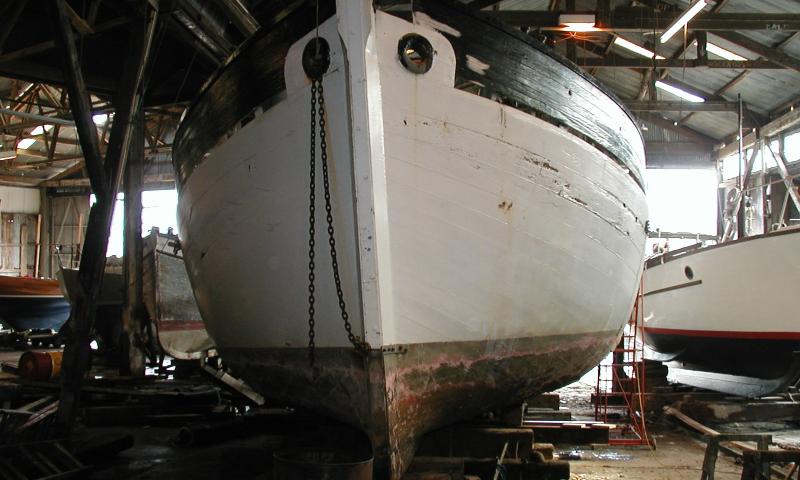 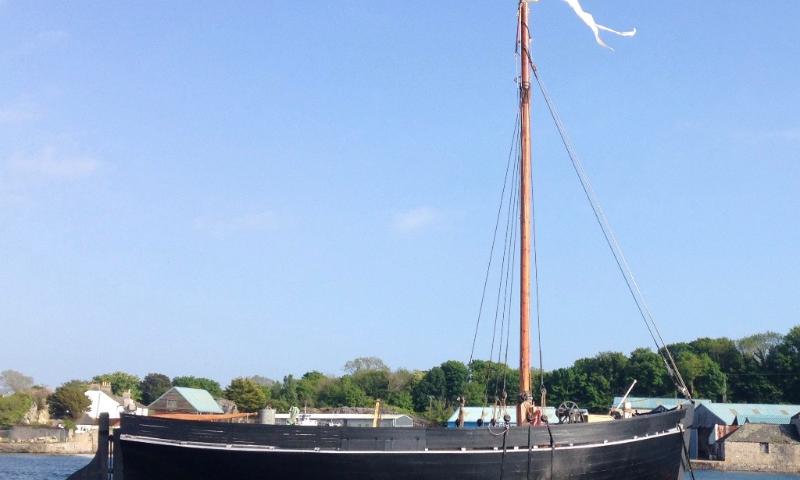 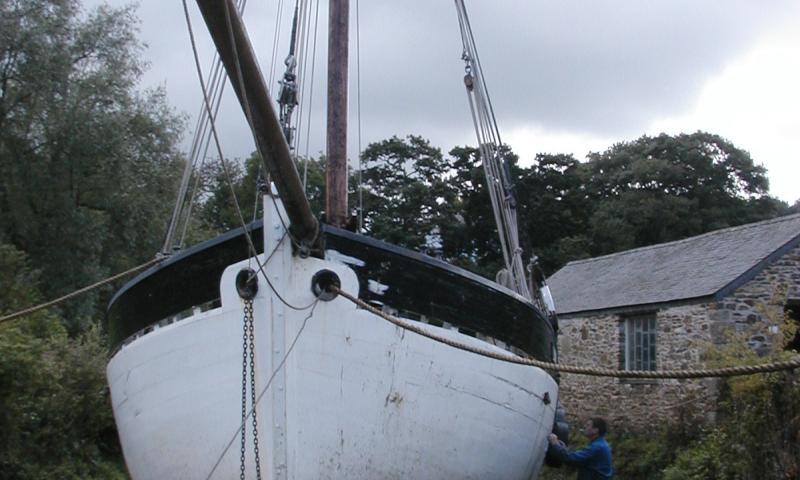 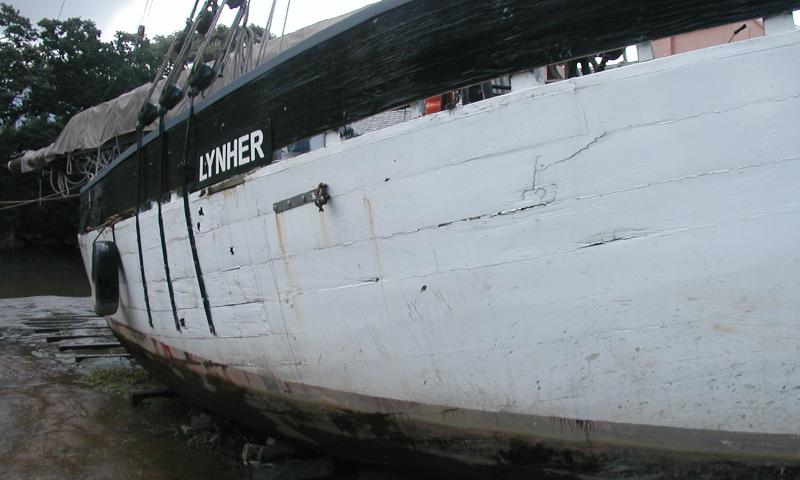 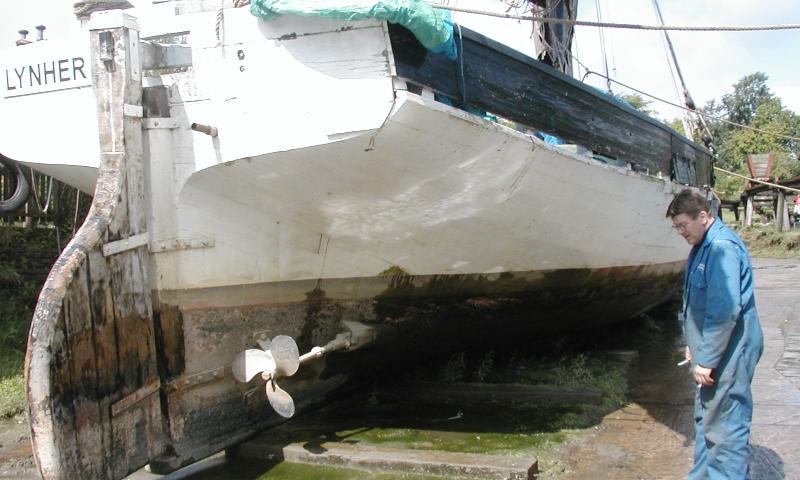 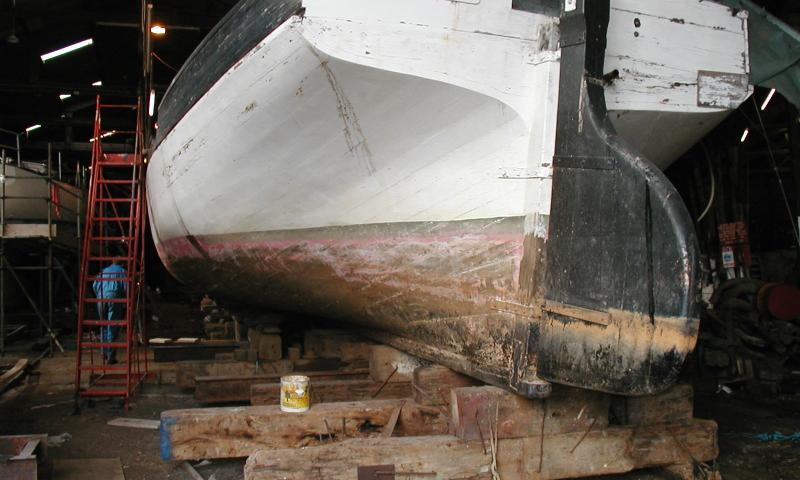 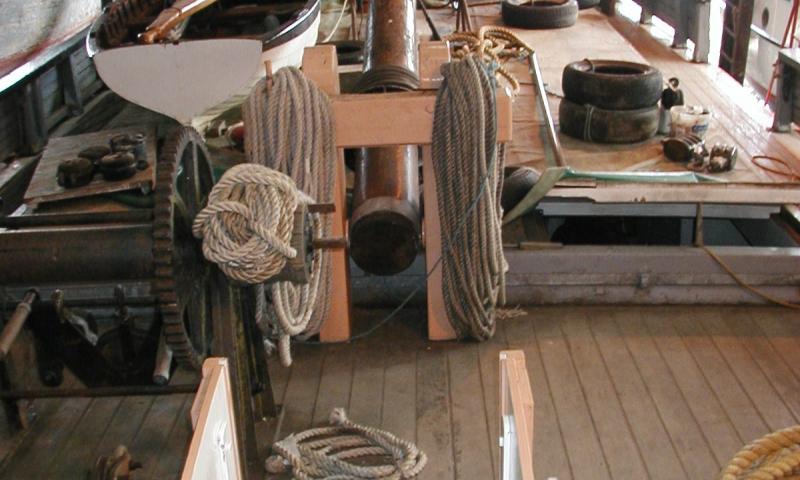 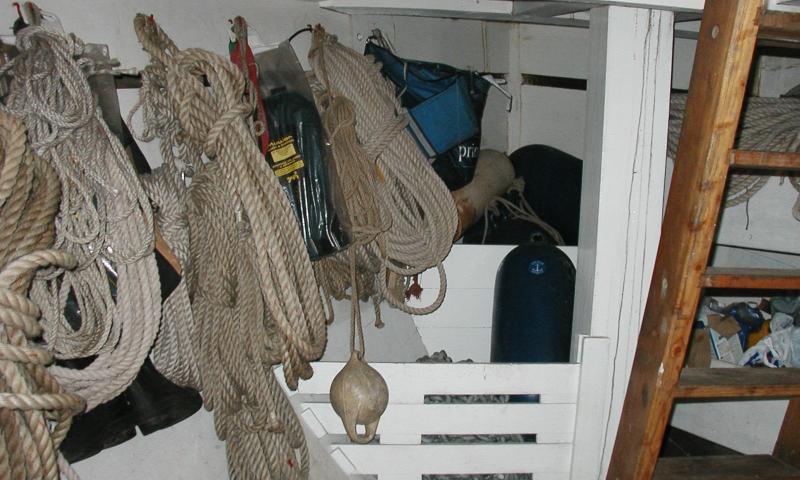 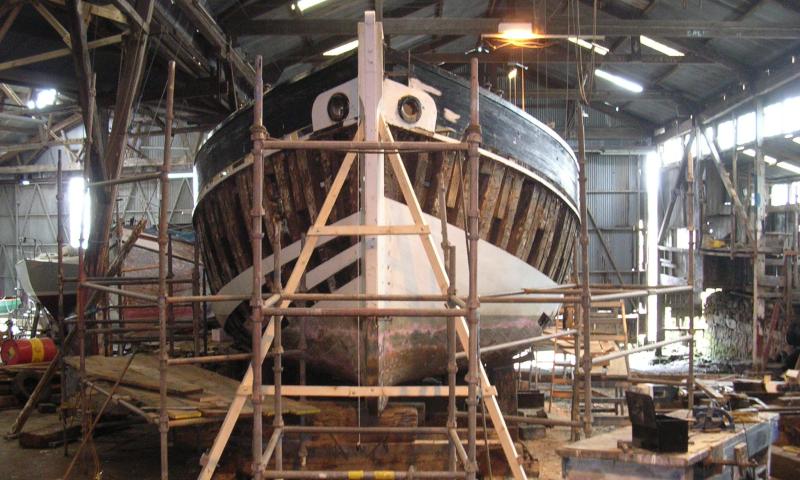 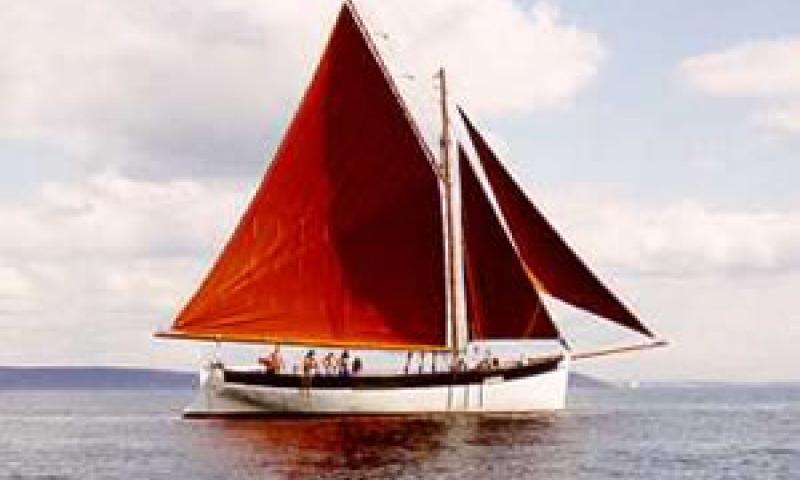 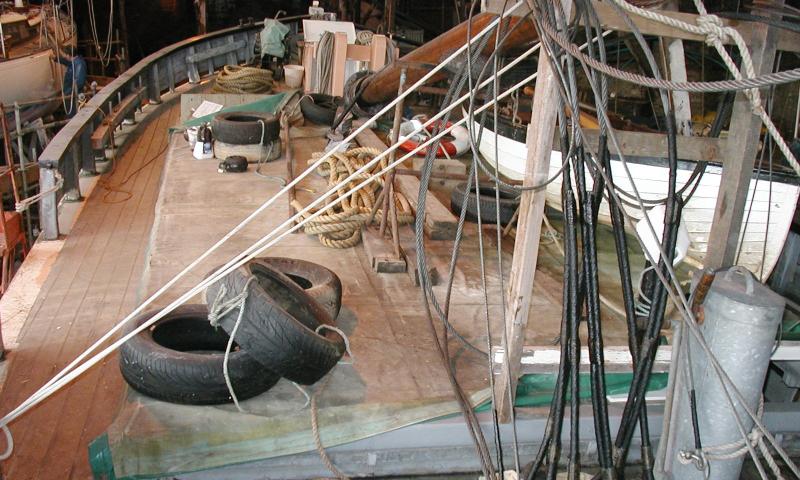 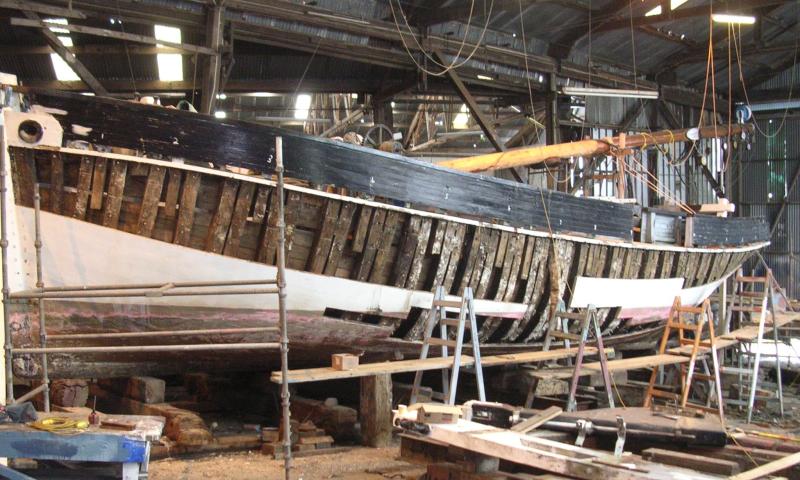 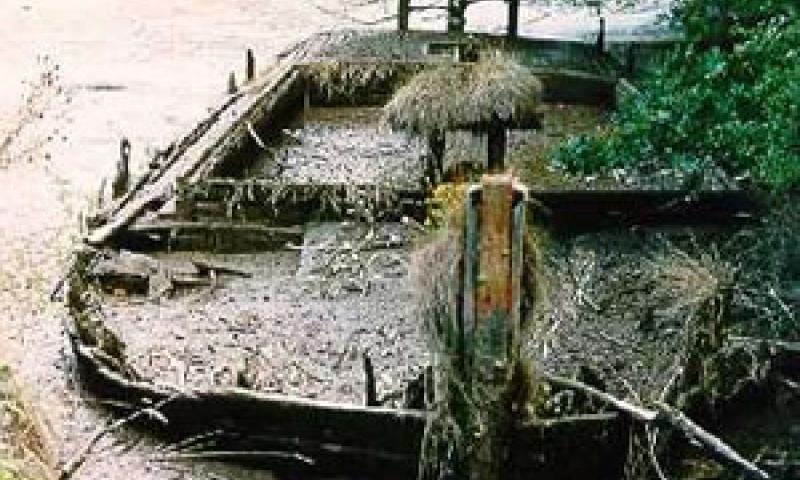 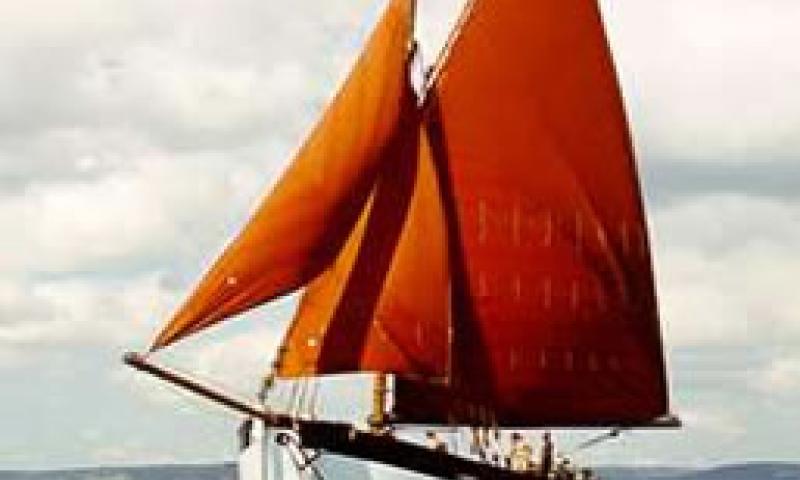 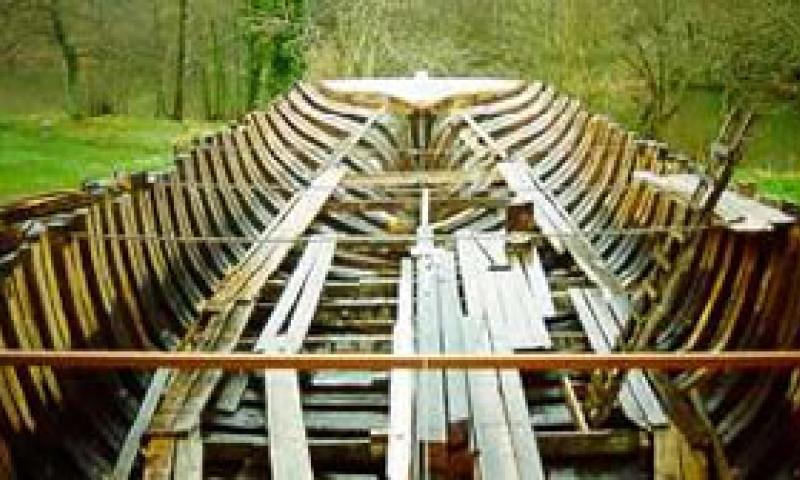 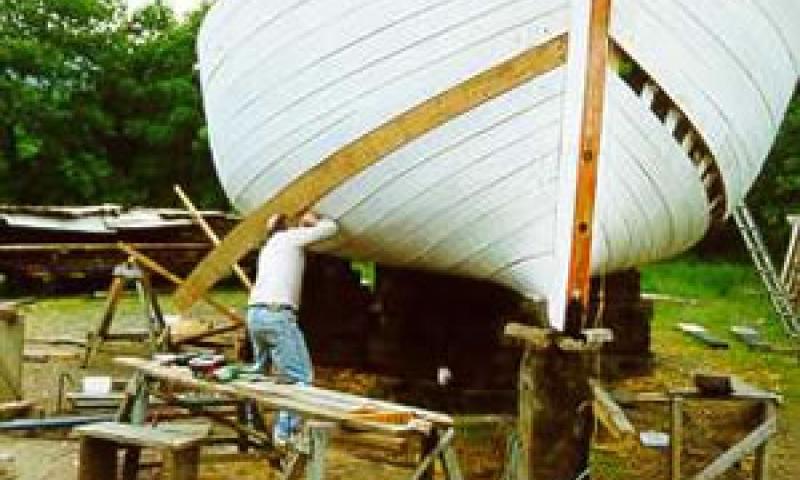 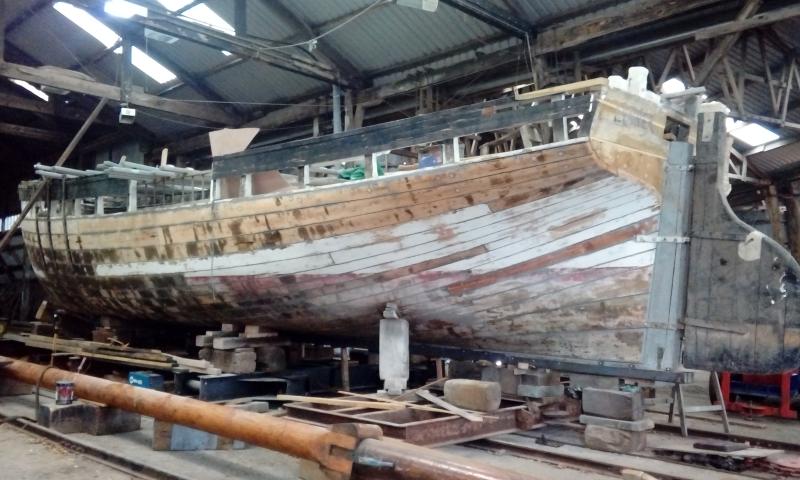 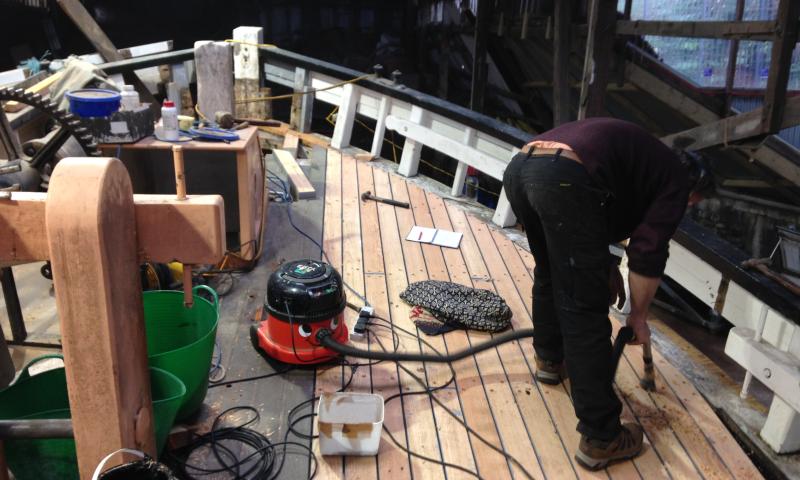 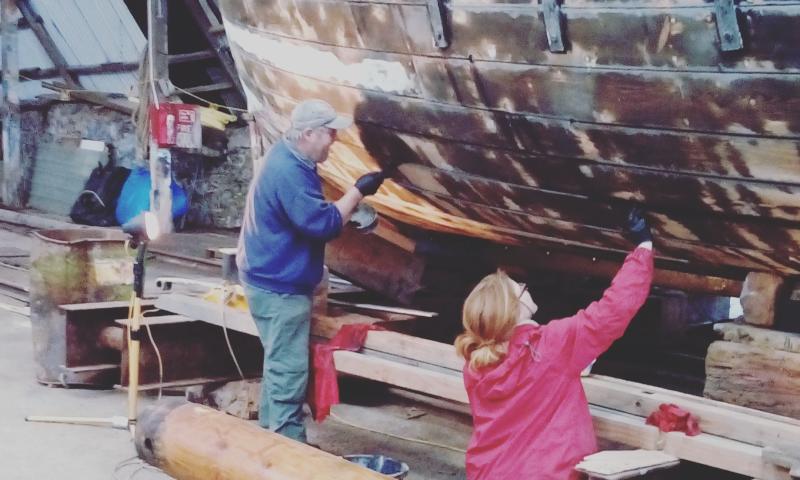 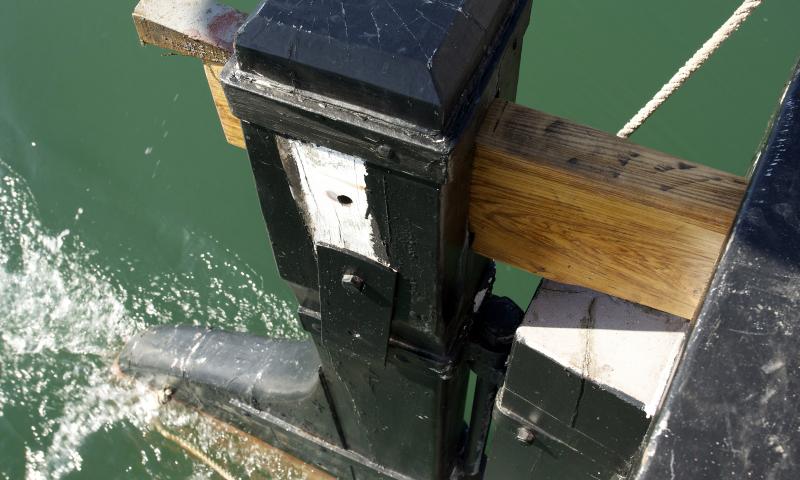 The LYNHER was designed as an ‘inside’ barge and exhibits particular methods of construction suited for navigating the upper reaches of the River Lynher, a small but important tributary of the River Tamar. Originally designed to carry cargo under sail, in 1928 she was fitted with a sturdy 27 horse power engine which ran on tractor vapourising oil.  A one-and-a-half horse power Hamworthy engine powering a winch fixed to a crane was installed at the same time, to speed up the loading/unloading process. After leaving service, she ended up a hulk for 33 years, before being raised and undergoing a nine year conservation project to return her to sailing condition.  From 2016, LYNHER has been subject to further conservation work with the hull being re-planked both internally and externally, thus replicating the exact build structure from 1896.  Her strong build includes 26 double and four single frames, with a long oak stringer either side of the interior.  Conservation is being carried out using traditional materials such as larch, oak, oakum and nails.  Some modern adaptations to ensure longevity include the use of galvanised nails, a metal shoe to encase and protect the original elm keel, modern glues and a linseed oil putty compound to seal the seams.  Despite the extent of works which this vessel has undergone, she retains a continuum in her hull structure, materials and the evidence these demonstrate of her working life.

LYNHER was built by the skilled boatbuilder James Goss in 1896 in Calstock and used throughout the industrial heyday of the Plymouth Rivers. She formed an important commercial and social link between the communities of the Rivers Lynher and Tamar and the growing town of Plymouth, even being used at one point to deliver post and produce, and she retains strong associations to this area today. She is the most pertinent example of an industrial method of river transport applied to its geographic location and her trade routes, founded on the transport of stone, fertiliser and farm produce mirror the industrial growth of Plymouth with its Naval Dockyard and the merchant shipping industry of the South West. During the first half of the Twentieth Century until she finished work in 1962, the barge was owned by Notter Bridge Quarries and Poldrissick Quarry, both on the River Lynher. She also played a role in the Second World War, being requisitioned by HM Government for use as a barrage balloon platform and anchored in Plymouth Sound for the duration.  LYNHER is now one of only two surviving Tamar barges (the other being SHAMROCK) from the hundreds which were once the workhorses of this region.  She has been recorded on the National Register of Historic Vessels since 1998 and has the status of being listed on the National Historic Fleet.

LYNHER is typical of her type with workaday lines and a substantial hold capacity.  Her small, simple hull, flat transom stern, round bows with no overhang and shallow draft were all designed to enable her to trade far up-stream in rivers.  Her internal structural specifications allowed her to reach up to the landing quays where the hold would be loaded with stones.  LYNHER remains in Plymouth today in the area where she traditionally operated.  Subject to the completion of conservation work to return her to operational use, she will be sailed once more in her heritage setting as an educational and charter vessel, linking the communities where she once traded.

The Tamar barge LYNHER was built in 1896 by James Goss at Calstock. Such barges carried coal, wood, limestone, sand and dung from Plymouth to Tamar Gardens. At one time she was owned by Mr Brand of Tudeford Post Office and Stores. He employed her bringing up supplies to his shop from Devonport.

For years after this she was engaged in stone carrying from Poldrissick quarries. The quarry owners, the Steed Brothers, had invested in other similar barges BLUE ELVAN, ELIZABETH JANE and TRIUMPH. Her last owner was Captain Sam Daymond of Saltash who re-registered her in 1924 when she was fitted with an engine. It is believed that she was last at work in 1954, though possibly reduced to a dumb lighter. The vessel was abandoned in the mud at Poldrissick quarry on the River Lynher in 1952 and recovered for restoration in 1989.

Currently under the ownership of the Lynher River Barge Community Interest Company (CIC), any surplus from the commercial operation of the vessel is re-invested into the provision of educational activities for the riverside communities.

Following an application to the Leader fund managed by the South East Cornwall Action Group on behalf of the Department for Environment, Food and Rural Affairs and with the support of the European Agricultural Fund for Rural Development, the Lynher Barge Conservation Project was awarded £21,412 towards the purchase and installation of a new engine on 4th September 2018.  The new engine, a Diesel Beta Marine 75hp, will allow the barge to manoeuvre safely along the Plymouth waterways and offer increased river voyages to the public and local communities.

In March 2021 it was reported that a new electric engine has been fitted and LYNHER has become a 'hybrid barge' as she has both this newly installed 20KW electric engine and the Diesel on the opposite side of the engine room.  The batteries will be re-charged by means of 5 solar panels placed above on the cabin top.  Having these two engines working together will vastly improve her manoeuvring ability as each engine will be connected to their own propeller - one on each side of LYNHER. 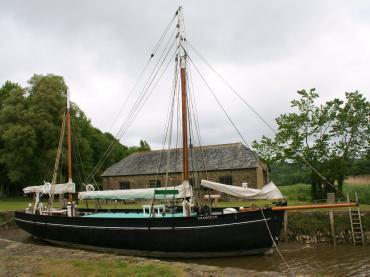