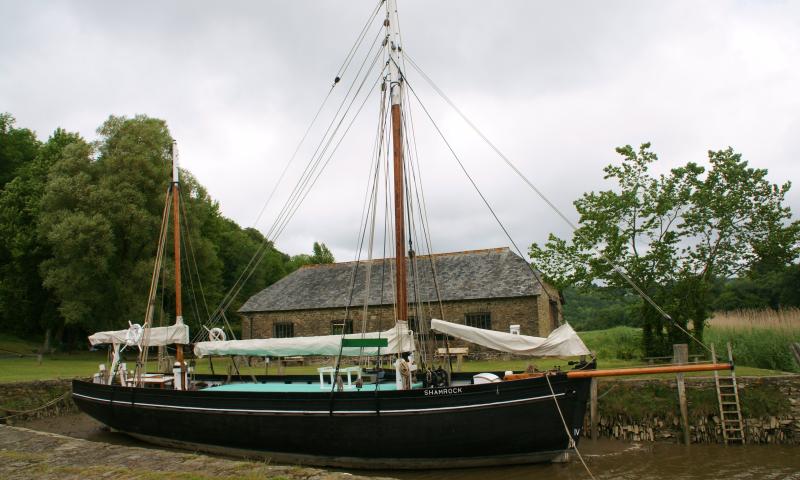 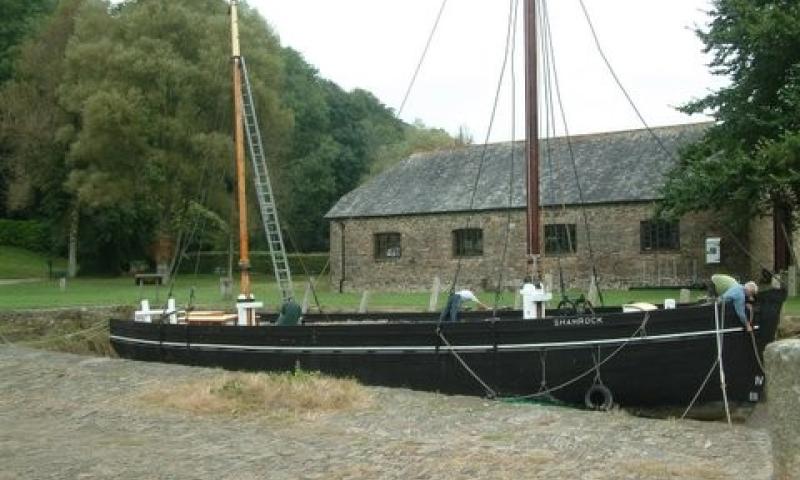 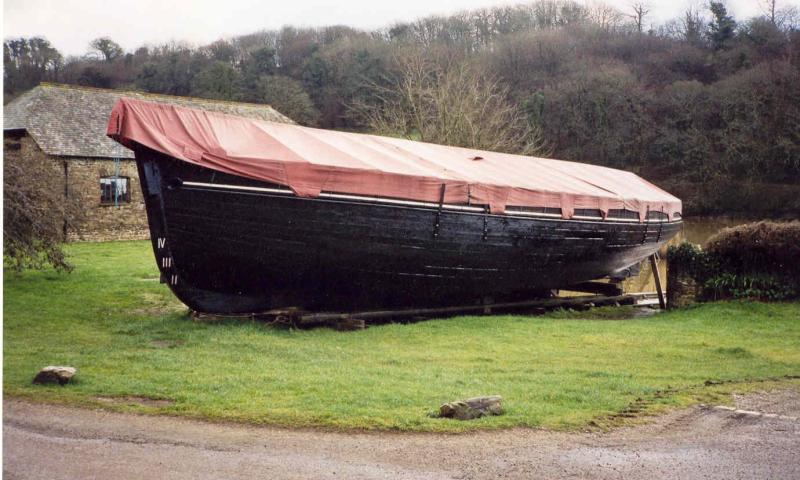 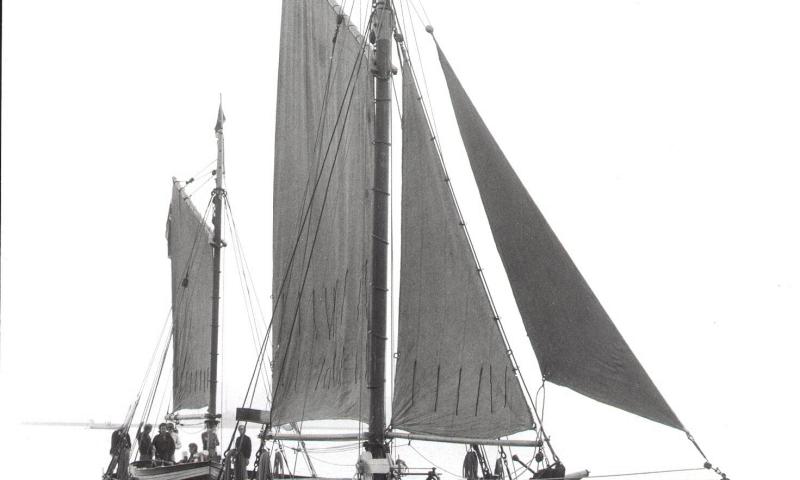 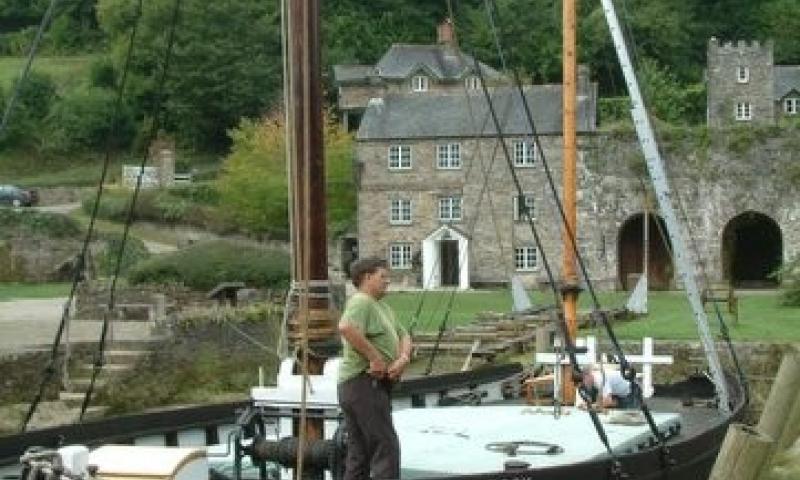 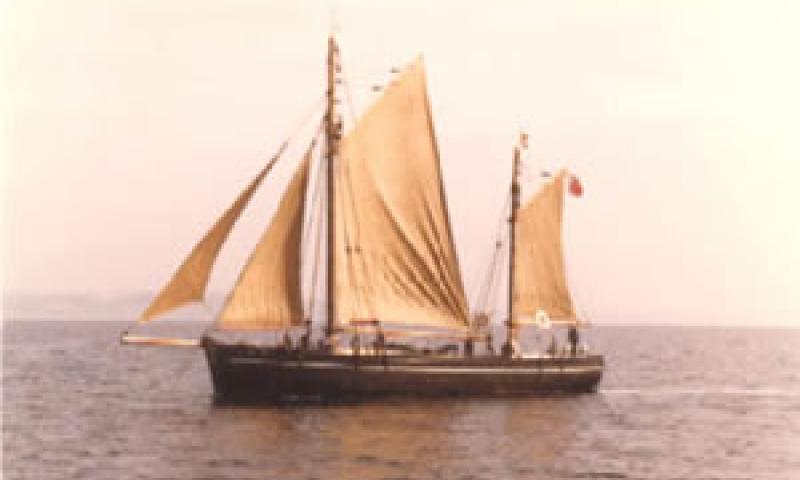 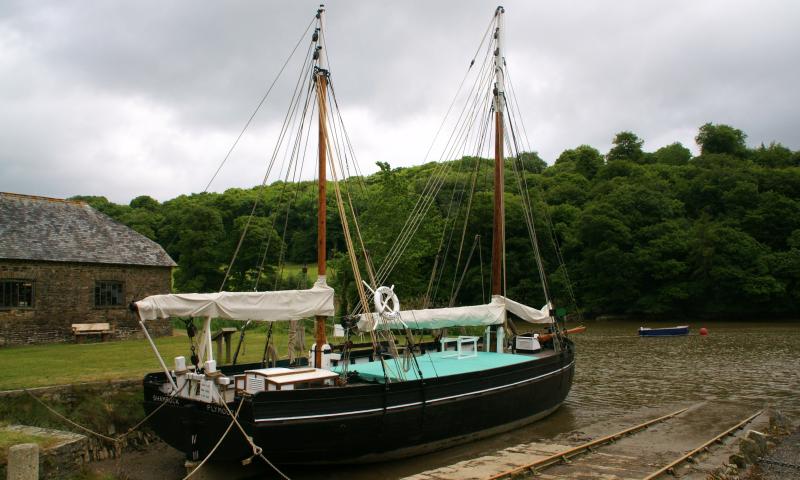 SHAMROCK was the last Tamar sailing barge ever built and was remarkable for a number of technological innovations, making her arguably the most advanced barge of her kind. Her flat bottom allowed her to trade where there was no quay, remaining upright when beached.  To reduce the natural leeway caused by her shallow hull, she was fitted with two steel plate drop keels, each 5 feet high. Although common in small North American merchant sailing vessels, very few British craft of the time were so equipped. SHAMROCK was also rigged with steel-bottle-screws on her mast shrouds, instead of the usual dead eyes and lanyards, to enable her two-man crew to lower her masts more easily when passing under low bridges.  When SHAMROCK was converted for use in the stone trade in 1919, her hull was strengthened with a false keel and a keelson, which required removal of her drop keels. The sail plan was extended with the additions of a bowsprit and jib, and she was fitted with a Blake 30 horse power four-stroke paraffin engine on the starboard side. She retained this configuration until the early 1960s, although her mizzen mast was removed in 1938. Her later conversion to a twin screw salvage and prospecting dredger required a 2 foot square hole to be cut in her hull to accommodate the drilling mechanism.  In 1974, she underwent conservation work to return her to her original form using like-for-like materials and techniques.  Grown timber was used to replace her decayed fabric.  Traditional replacement fittings were sourced and the work was undertaken using natural fibre rigging, natural fibre sails and no laminates or glues.  Even the bilge sag resulting from beaching with her new false keel was allowed to remain to reflect phases in her working life.

SHAMROCK was launched in July 1899 by Frederick Hawke of Stonehouse, Plymouth for Tom Williams, a lighterman from Torpoint giving her strong associations to this area. She was named after the then challenger for the America's Cup.  She also has significant regional connections with Devon and Cornwall.  Her design as an ‘inside barge’ saw her initially carry cargoes on the Tamar or from Torpoint to Plymouth, although her maiden voyage was along the coast to Fowey.  However, her working area then extended to the relatively sheltered waters of the south coast of Devon and Cornwall and by the 1930s, she was using Falmouth as her base port. She operated during the First World War, mainly carrying 18lb shells from transatlantic ammunition ships moored in Plymouth Sound to Ocean Quay.  By the 1950s, SHAMROCH had the distinction of being the last Tamar barge to trade under sail and has been recorded on the National Register of Historic Vessels since 1996.  She is now one of only two surviving Tamar barges (the other being LYNHER) from the hundreds which were once the workhorses of this region.

SHAMROCK is representative of her type with a small, simple hull with a flat transom stern, round bows with no overhang, and a shallow draft to enable her to trade far up-steam in rivers. She has aesthetic beauty not only for her graceful lines but also for the robust simplicity and practicality of a traditional merchant sailing ship. Her hull construction is exposed in her hold, demonstrating clearly how larger ships were constructed. She is typical of many maritime workhorses in being slow, almost stubborn in her manoeuvres under sail. She is however capable of commendable speed with the wind in the right quarter. SHAMROCK thus demonstrates the limitations of sailing vessels that formed the backbone of British trade two centuries ago. She is an evocative example of how boat builders and mariners designed, built, operated and maintained wooden sailing vessels in the late nineteenth and early twentieth centuries.  SHAMROCK is now based at Cotehele Quay, on the River Tamar in Cornwall in a heritage setting which is indicative of her working life.  As a National Trust owned vessel, she is fully accessible to the public and is occasionally sailed on the river.

This statement was developed as part of the Heritage Lottery funded First World War project. http://www.ww1britainssurvivingvessels.org.uk

Built in 1899 by Frederick Hawke of Plymouth for Tom Williams, SHAMROCK is a sailing ketch built for cargo work on the River Tamar and estuary in South West England. Her construction was of pitch pine and oak. From 1899 to 1962 she worked as a barge plying her trade though with several changes of ownership. In the late 1930s she moved from Plymouth to the Truro River where she operated in several Cornish ports. In 1962 she was used  as a test drilling barge for core samples on the sea bed within St Ives Bay, Cornwall and later became a salvage vessel between 1966 and 1970 when she fell into disrepair. The National Trust acquired her in 1974 and she was towed up the River Tamar to Cotehele Quay for restoration. This was a major joint project between the National Trust and the National Maritime Museum. SHAMROCK is the centrepiece of a display at Cotehele from where she makes occasional voyages on the River Tamar. In Winter 2006, several planks on her starboard side needed to be replaced, which delayed her spring launch by a month. However, a team of skilled volunteers assisted with the fitting of the 2 inch thick larch planks.

Update, September 2020: Funding has now run out for conservation of SHAMROCK and a new fundraiser launched: www.nationaltrust.org.uk/appeal/save-shamrock-appeal 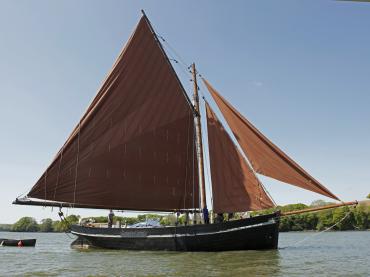