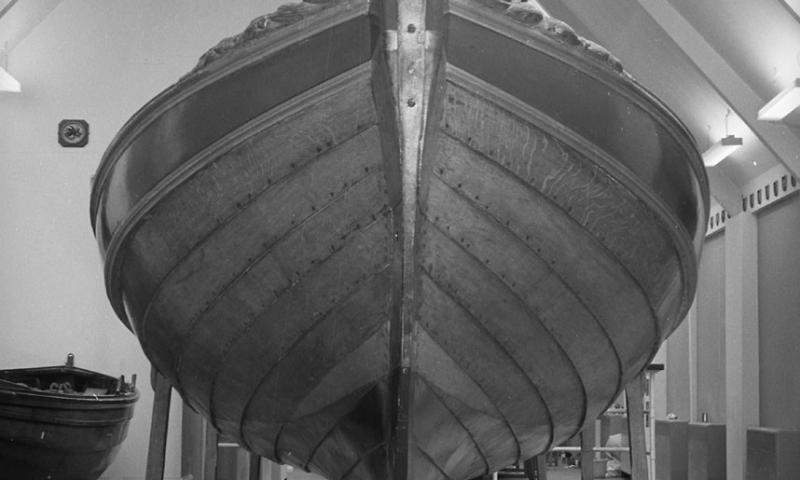 QUEEN MARY’S SHALLOP is a remarkable boat constructed using traditional methods and materials available at the time, similar to those used in the building of wherries. Although generally similar in proportions, her hull is not in the true wherry tradition. Her overall length is nearly 42 feet, her beam over 6½ feet, and she has a depth of nearly 3 feet. Her timber hull is constructed of oak and elm using the clinker method. The planks were held together using treenails, iron and copper nails, and were clenched. She was fitted with ten oars and was propelled by rowing. She has no decks but was fitted with a portable canopy; the original one was green and gold; the present one was made in 1912. Her elaborately carved forward half carries gilded decoration, and she has a raised bow displaying the Royal crest. Post 1930, she underwent some conservation work including extensive repair of her oak hull below the waterline, but much of the original construction remains.

QUEEN MARY’S SHALLOP, now over 325 years old, was commissioned and built by William III for Queen Mary II in 1689. She was one of several state barges used regularly at State occasions during the 160 years between 1689 and 1849. However, after 1849 when PRINCE FREDERICK’S BARGE was taken out of service, she was the only remaining State Barge of the English Crown. She continued to be used until the early decades of the twentieth century. Significant occasions in which she was involved include: the Royal Regatta at Henley in 1912, attended by King George V and Queen Mary; the Peace Pageant in 1919, which she led to celebrate the efforts of English mariners and merchant seamen in the First World War. In 1930 she was presented to the National Maritime Museum by King George V. She was eventually put on public display in 1955 when the New Barge House was completed.  She has been recorded on the National Register of Historic Vessels since 2000 and is a member of the National Historic Fleet. Her great national significance is a consequence of her age, her rarity, and her royal associations.

The primary purpose of QUEEN MARY’S SHALLOP was as an impressive ceremonial barge for use on important royal occasions. She had no other use. As a royal barge she is extremely striking in appearance with very elegant lines. Her shape, with her bluff bow and raked curved transom stern, her green and gold canopy and the fittings for twelve oarsmen, were all designed to impress, and made her perfectly fit for purpose. She retains this shape today. She is now kept in static preservation in the National Maritime Museum store pending future display.

This remarkable boat was commissioned by William III for Queen Mary II in 1689. Although generally similar in proportions, her hull is not in the true wherry tradition. Her original canopy was green and gold; the present one was made in 1912.

After 1849 when Prince Frederick's Barge, was taken out of service she was the only remaining State Barge of the English Crown. She was used in 1912 when King George V and Queen Mary attended the Royal Regatta at Henley, and they again used her in the Peace Pageant in August 1919. The shallop was presented to the National Maritime Museum by King George V in 1930 but was not displayed until 1955 when the Barge House was completed.