MTB331 is the last surviving Thornycroft 55-foot Coastal Motor Boat. These innovative craft were designed during the First World War, following a suggestion by three junior officers that small, fast torpedo-carrying craft might be able to pass over German minefields and attack the High Seas Fleet at its base in Wilhelmshave. Designed by pioneering boat builder John Thorneycroft and built all over the country, including at Camper and Nicholson’s Yard in Gosport, the first 40-foot boats first saw action at Zeebrugge in April 1917.

The Small 40-foot boats could only carry one small torpedo so in 1916, Thornycroft a much larger 55-foot model which could carry two, whilst still capable of extraordinary speeds of up to 41 knots, or 76km/h. The larger boats saw action in the Baltic and Caspian Seas in 1919, during the ‘secret war’ to overturn the Russian Revolution

These remarkable boats remained current technology right up to World War 2. MTB331 was one of the last to be built, and was part of an order for the Government of the Philippines which were requisitioned for the Royal Navy in 1914. She was built at Thorneycroft’s yard at Woolston, near Southampton, commissioned in November 1941, and based at HMS Hornet, the Coastal Forces Base at Haslar in Gosport. She was decommissioned for disposal in 1945.

In 2017 MTB331 was transferred to safe storage at the Royal Navy Fleet Air Arm Museum in preparation for a move to the National Museum of the Royal Navy Explosion Museum of Naval Firepower in Gospel as part of a wider regeneration project.

Update, July 2021: Coastal motor boat CMB331 and motor torpedo boat MTB71 arrived at the National Museum of the Royal Navy’s (NMRN) Explosion Museum in Gosport to be part of the new exhibition The Night Hunters: The Royal Navy’s Coastal Forces At War which will open in the autumn to tell the story of the Royal Navy’s coastal forces from inception in August 1916 to their demise in the late 1950s. 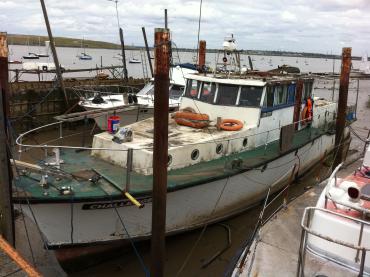