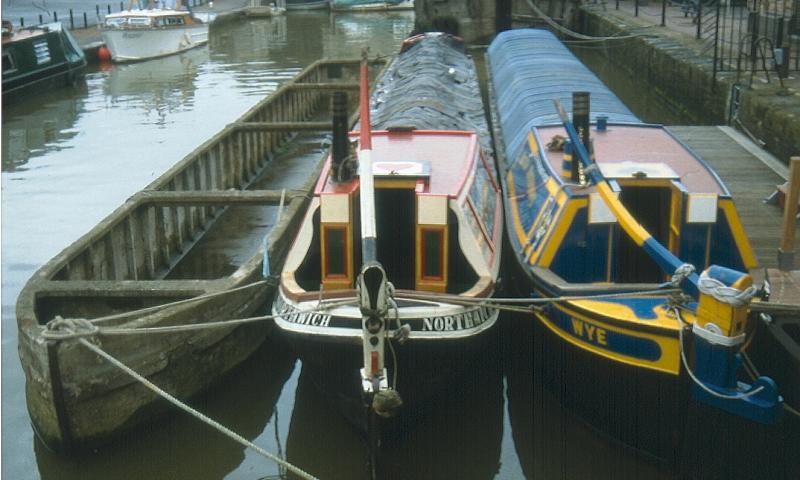 CONCRETE CANAL BOAT was designed as a prototype during wartime to be built with minimal impact on materials and skills needed elsewhere for the war effort.  The use of concrete as a build material impacted on her design, making her much heavier with limited cargo carrying capacity. Her hull remains in its original form, although in 2005 damage to the gunwales and bows of the boat was repaired by concrete specialists.

CONCRETE CANAL BOAT is a unique survivor of an experiment undertaken towards the end of the First World War in which novel boat building methods were tested, as a result of critical shortages of more traditional boat-building materials such as wood or steel. The Moreuse of concrete was intended as a means of overcoming the wartime shortages of steel and fabrication skills needed for conventional canal boats. CONCRETE CANAL BOAT took about one month to construct, and the cost was very much less than that of either a steel or wooden vessel. She was the second of three prototype Birmingham Canal day boats built in 1918 by local contract builders, A.H. Guest of Amblecote near Stourbridge. CONCRETE CANAL BOAT had limited use during her lifetime and this was solely on a local basis, carrying first some trial loads of timber for Guests and later being used for bank protection works in the mid-1930s.  CONCRETE CANAL BOAT was recorded on the National Register of Historic Vessels in 1996 and is a member of the National Historic Fleet.

The overall dimensions of CONCRETE CANAL BOAT were constrained by the locks through which she had to pass. She was 70ft in length, 6ft 11in in width, and had a total moulded depth of 4 ft. The draught of water of the unloaded boat was about 14 inches, as compared to around 8 to 9 inches for a similar tonnage vessel constructed of wood or steel. The total weight of concrete and steel involved in her construction was about 13 tons. However, with traditional steel bar reinforcement, the concrete had to be almost 3 inches thick, and the consequence was that the boat weighed almost twice as much as an equivalent iron barge. This meant that she could only carry cargoes up to a maximum weight of about 24 tons, compared to over 31 tons for an iron barge of the same external dimensions. The boat was open, and she was described as a ‘monkey’ barge to distinguish her from similar barges with cabin accommodation. She has close associations with the West Midlands and Gloucester areas, and remains at the Gloucester Waterways Museum as a floating exhibit.

CONCRETE CANAL BOATwas one of it is believed three prototype Birmingham Canal day boats built in 1918 by A.H. Guest of Amblecote near Stourbridge, local contract builders who normally built houses and other buildings such at schools. It is the second of the boats built and is called BCN No2. The use of concrete was intended as a means of overcoming the wartime shortages of steel and fabrication skills needed for conventional canal boats. However, with traditional steel bar reinforcement, the concrete had to be almost three inches thick, and the consequence was that the boats weighed almost twice as much as an iron boat. This meant that they could only carry about 24 tons, compared to over 31 tons for an iron boat of the same external dimensions. The boats did carry some trial loads of timber for Guests, but it was found that the concrete was easily damaged in service and that patching up with cement was not always effective. By 1919, it was acknowledged that the experiment was not a success, and it is believed that the boats were laid up for several years. Then, in the mid 1930s, they were incorporated into bank protection works beside the Stuart Crystal glassworks on the Stourbridge Canal, not far from where they were built. This role continued until the summer of 1988, when British Waterways dug out one of the boats as part of the process to provide a new wharf and moorings for visitors to the glassworks, the other boats had to remain as they were beneath part of a building. The rescued boat was slightly damaged, but it was basically sound and was brought down the River Severn to be displayed at Gloucester. In 2005 the museum obtained a PRISM grant to repair the narrowboat and a concrete barge, the damage to the gunwales and bows of the boat were repaired by concrete specialists and it remains at the museum as a floating exhibit.