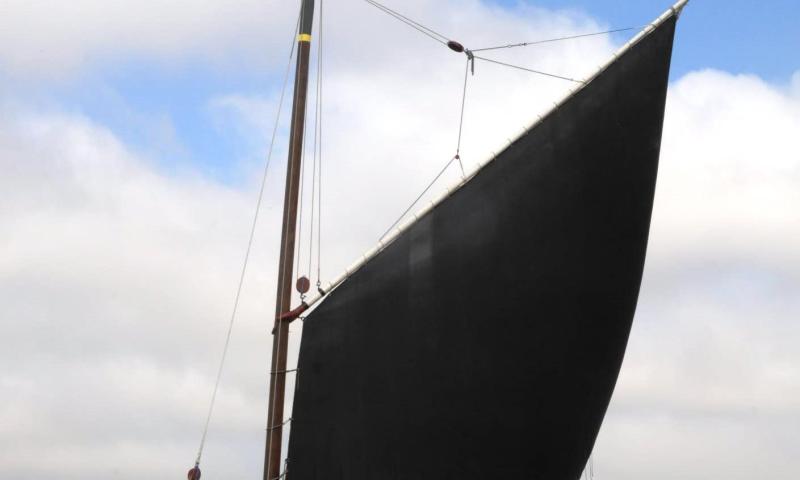 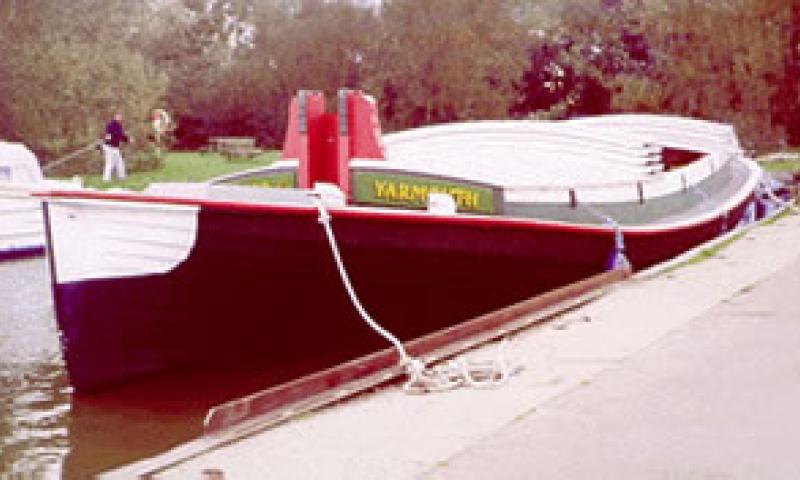 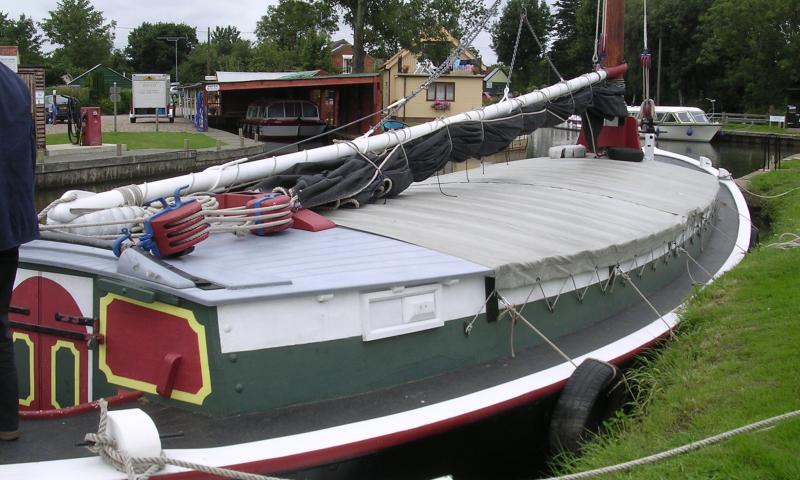 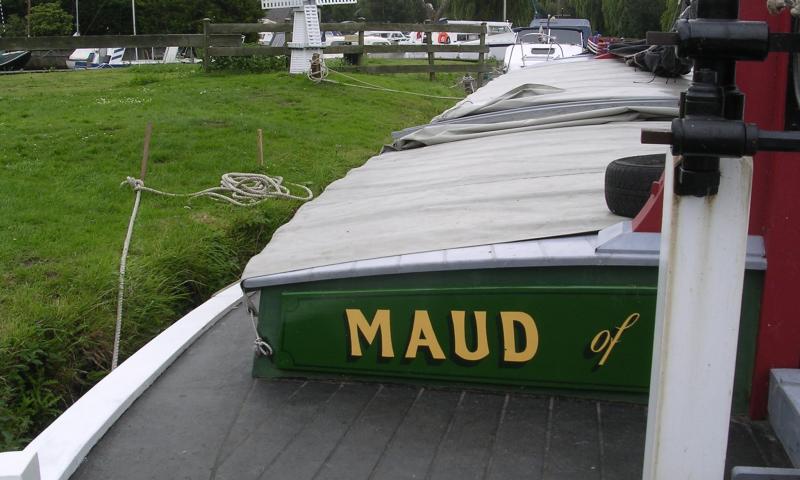 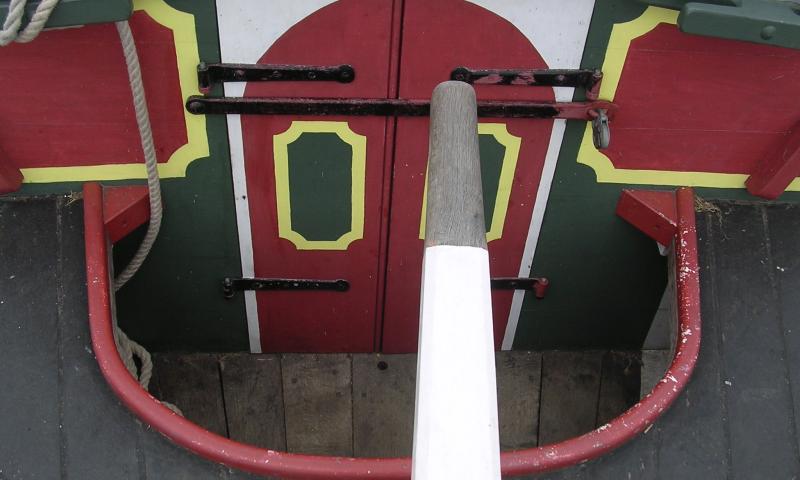 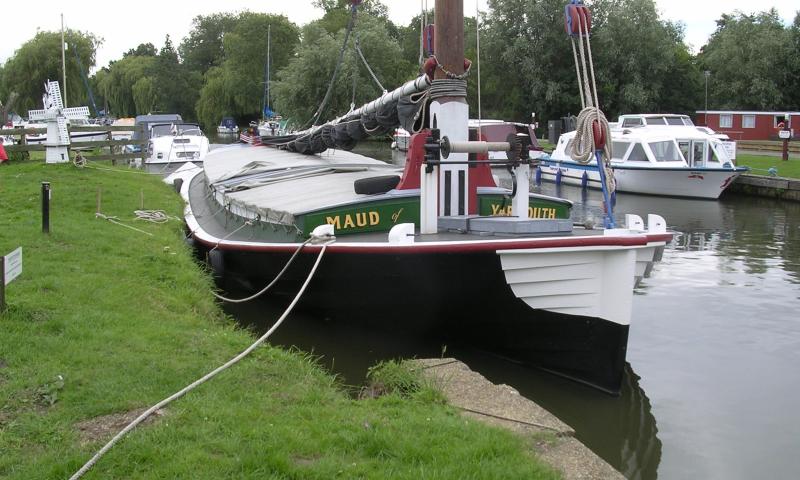 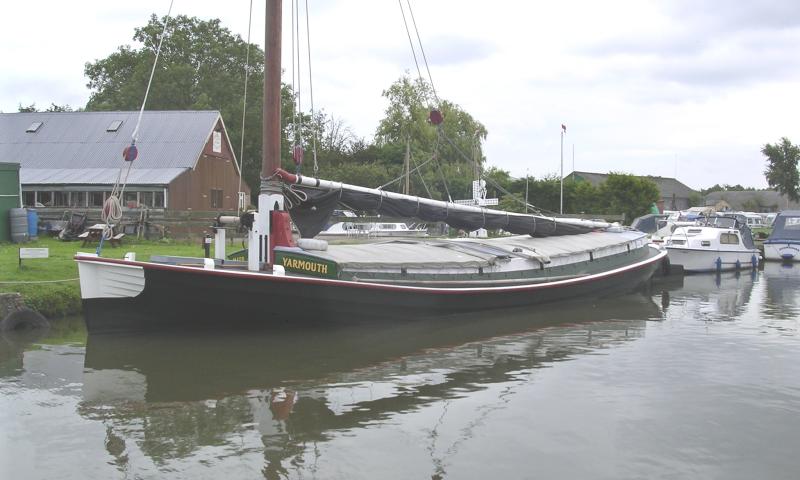 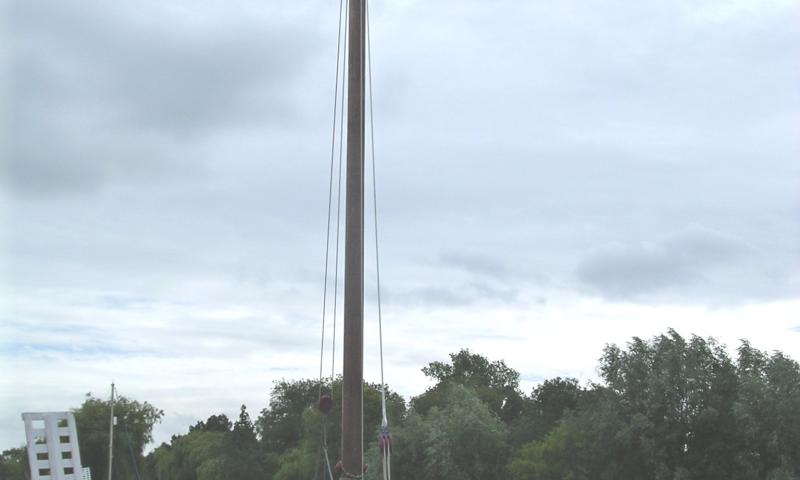 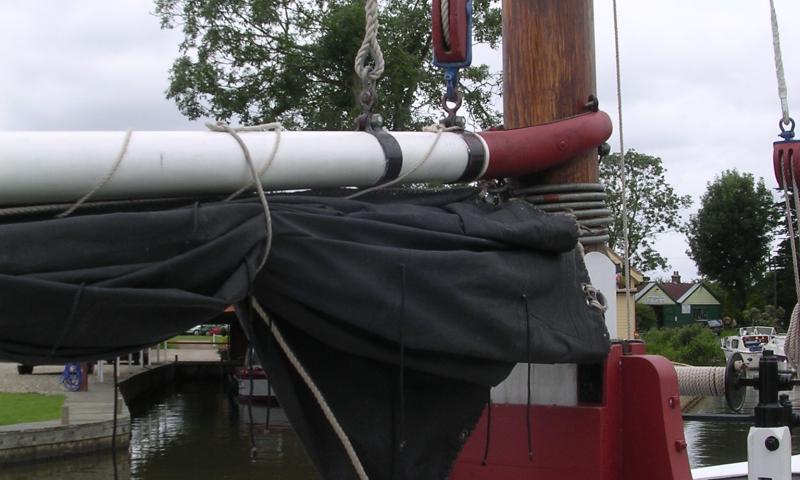 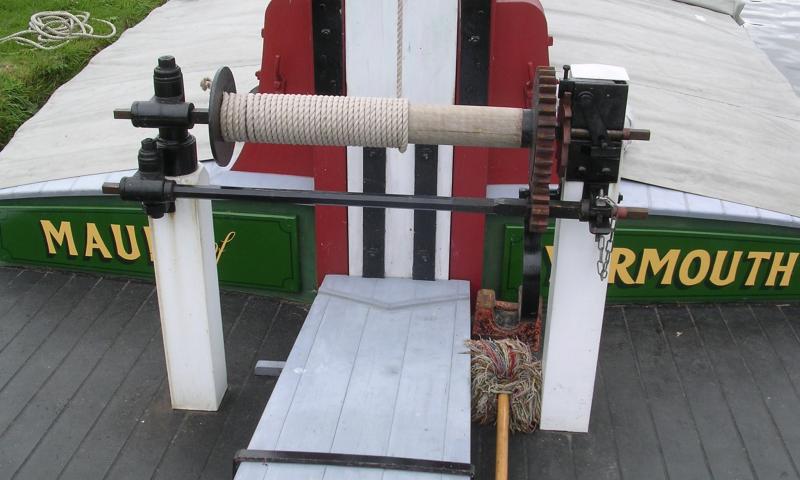 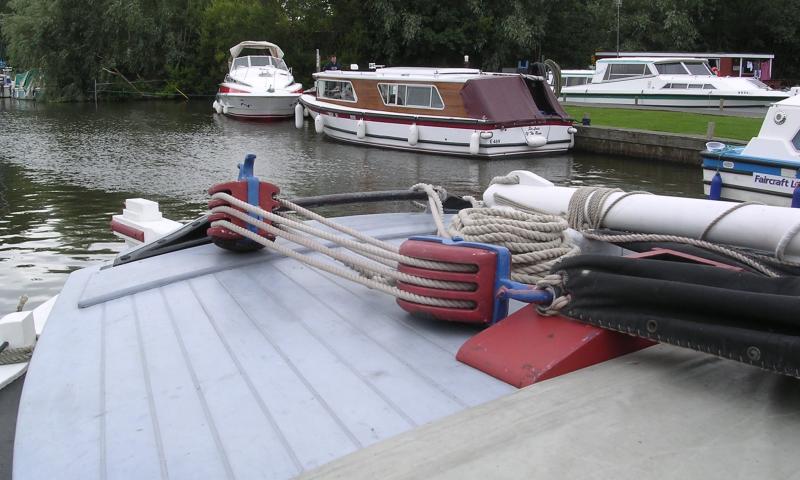 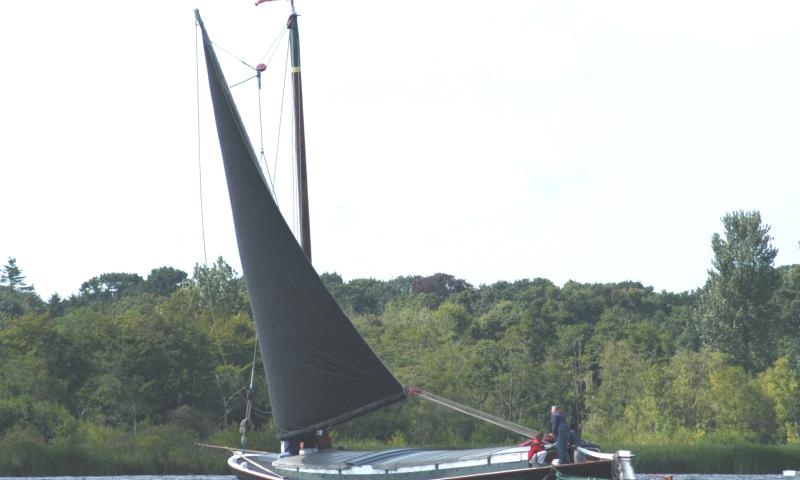 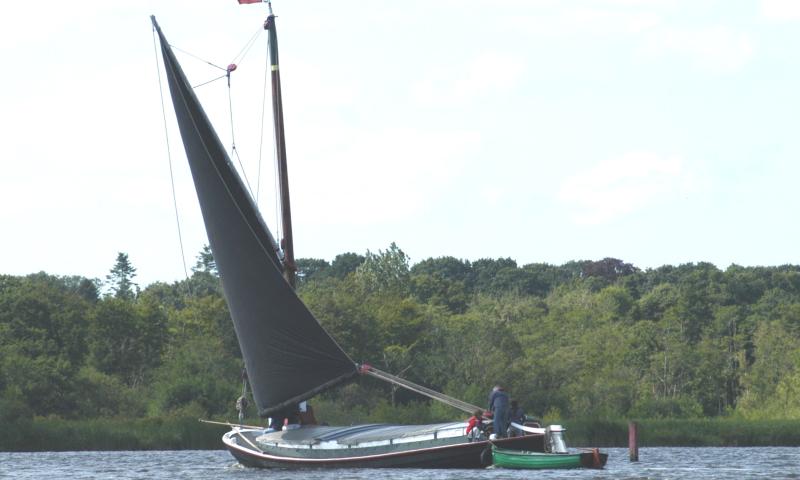 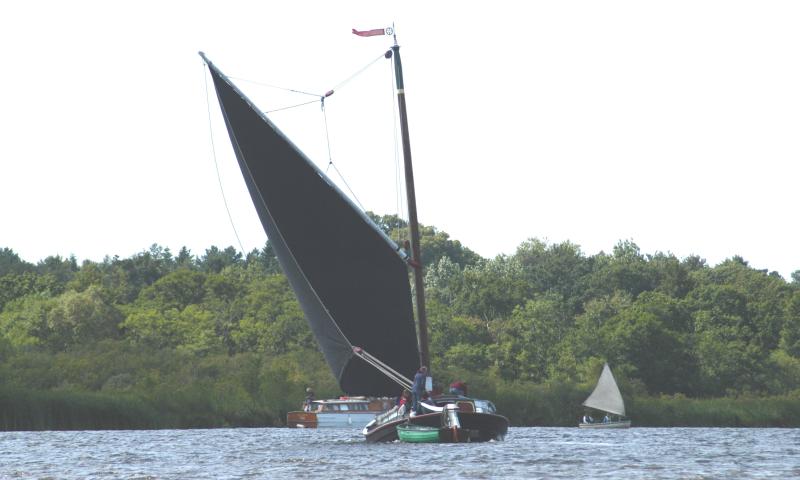 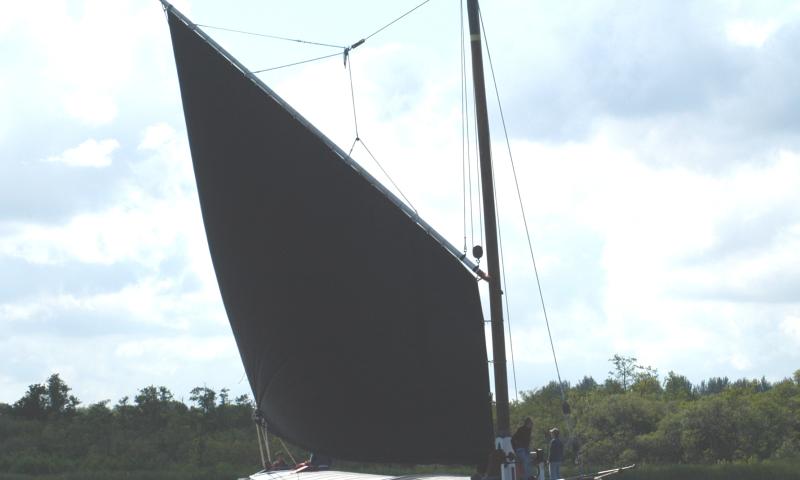 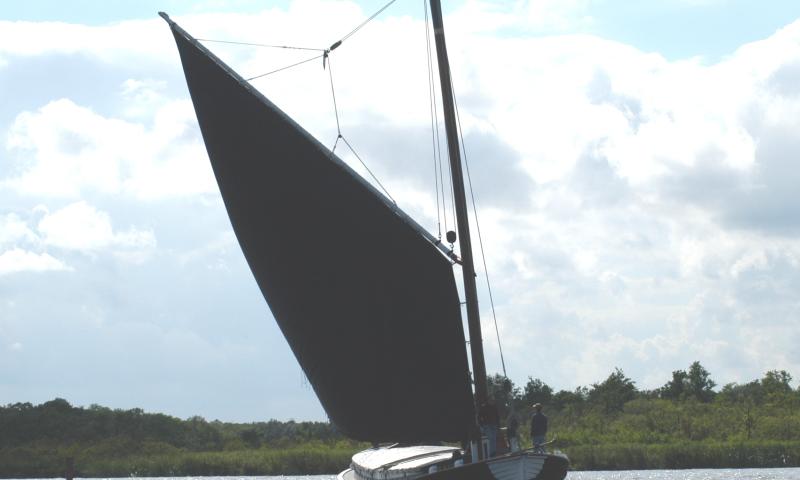 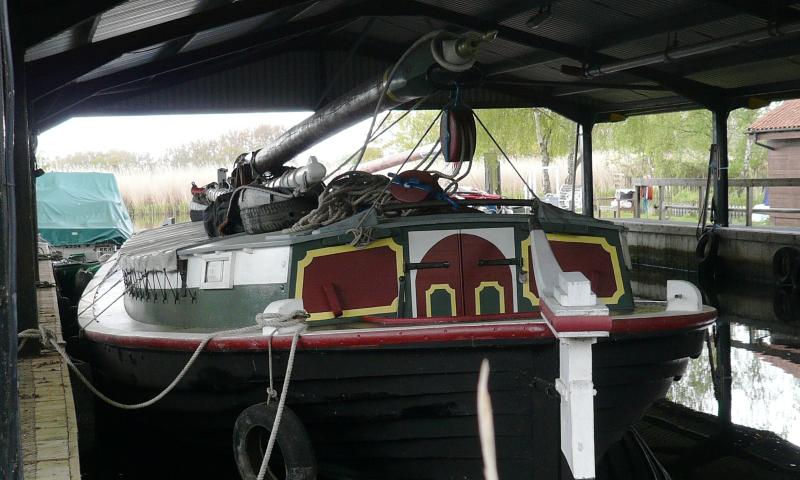 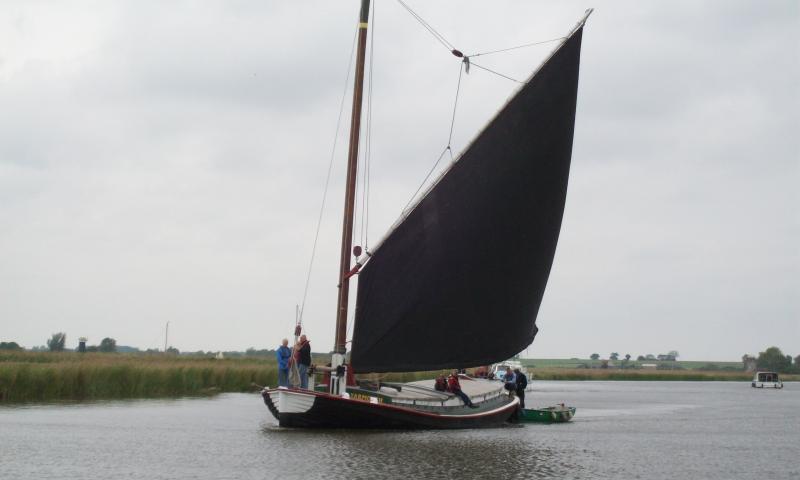 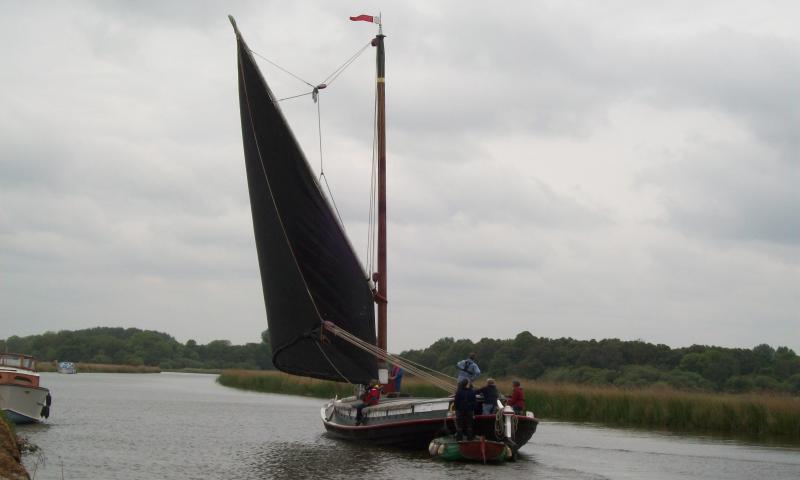 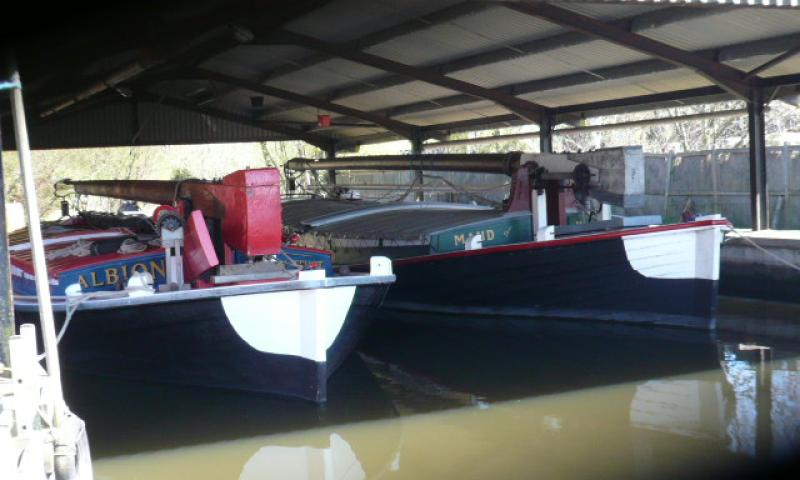 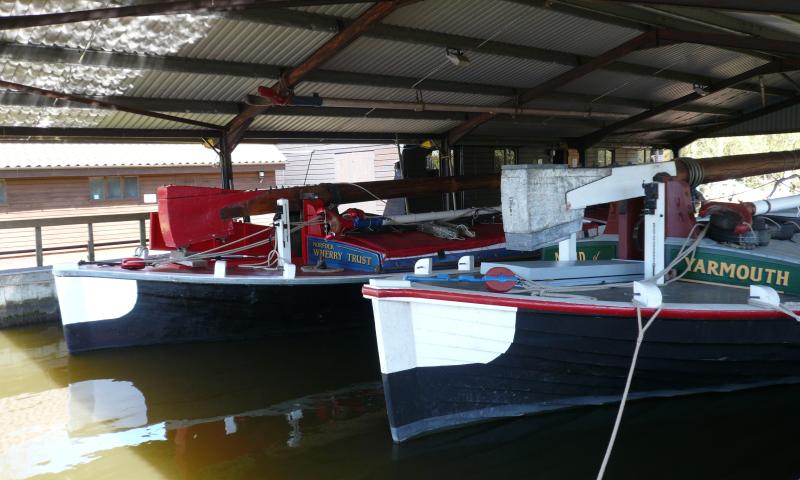 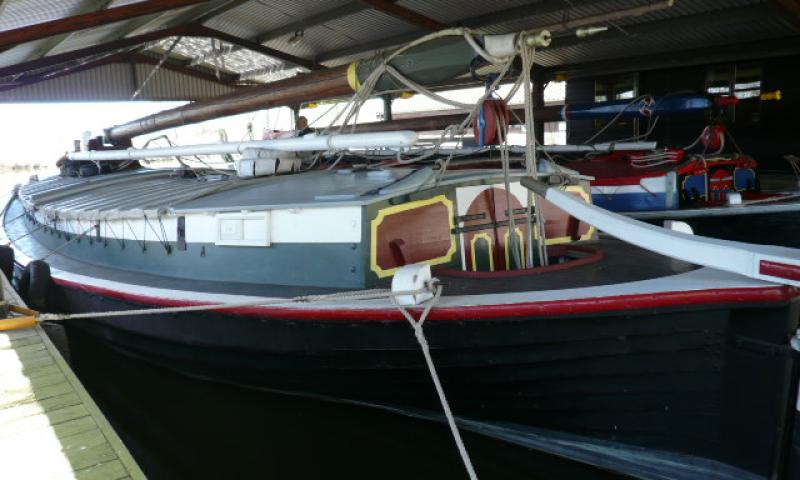 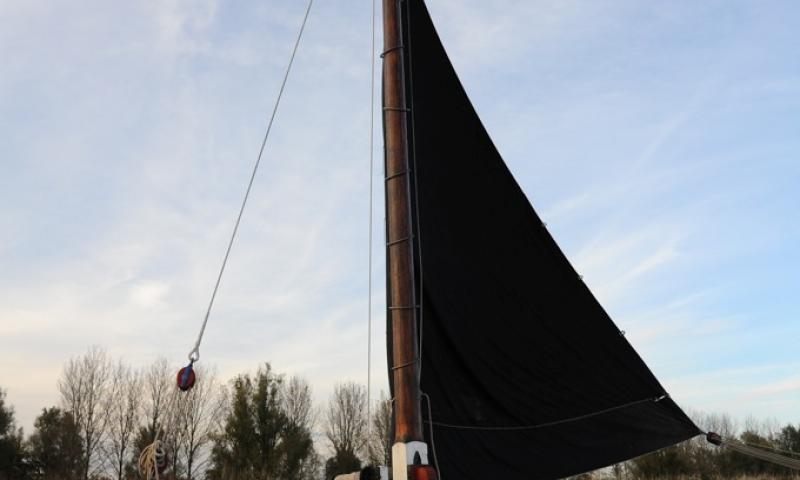 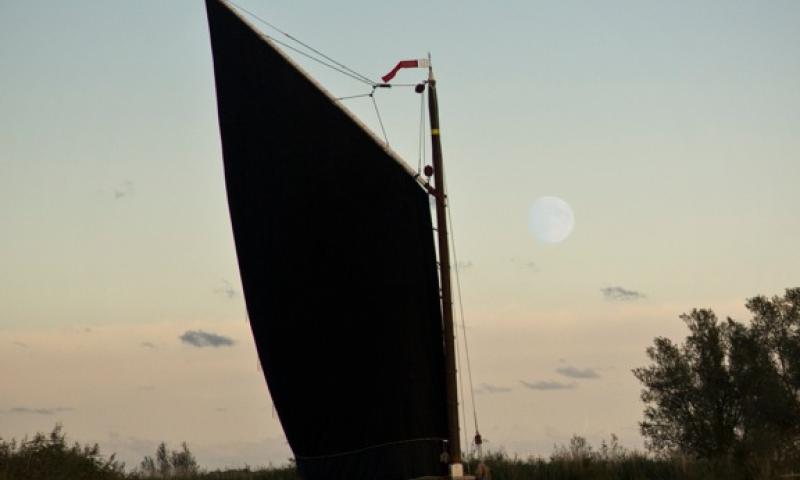 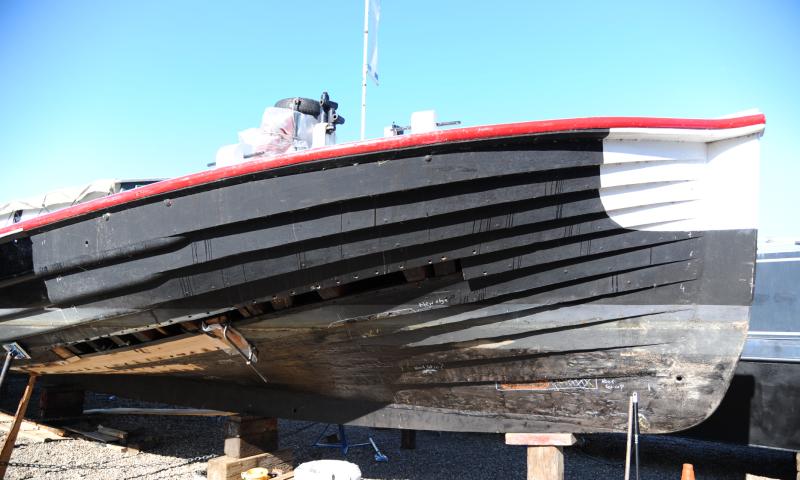 MAUD is the last surviving Norfolk trading wherry to be built by the renowned Halls Yard at Reedham and is the sole remaining example of a clinker-built wherry designed for the commercial carriage of timber.  From her launch in 1899 through to her abandonment in the early 1960s, MAUD was kept well maintained as a working vessel.  An 18-year conservation project in the early 1980s followed the original method and materials of construction.    A few original frames were conserved or repaired by re-facing, whilst those that were beyond conservation were replaced like-for-like, being formed from grown oak bends cut from locally grown English oak, with the grain following the curve of the frame. Similarly, her hatches, side decks and hold sides, where they were found to be missing or beyond repair, were recreated according to pattern or by reference to archive drawings.   Whilst her decks and some topside planking required replacement, her hog and some bottom planking survived, reflecting the quality of build and material in her original construction.  A new rig was made to the original configuration using surviving dimensional information, to include the large lead counterweight that facilitates mast lowering by one man.  The unstayed mast is made from a single baulk of pitch pine and supports a loose footed gaff sail of some 1200 square foot.  No adaptations to form or fabric were necessary to facilitate the change to passenger carrying and MAUD retains her traditional open hold.

MAUD’s working life gives her strong regional associations with the Norfolk and Suffolk Broads.  She was built by the famous wherry-building yard Halls of Reedham for a director of Jewson timber merchants in Great Yarmouth.  Her early career in the ownership of Walter Christmas Bunn can be traced through the records of the Jewson company and there are detailed accounts of the cargoes she carried from launch up to 1918.  Halls Yard was renowned as producing the fastest wherries of their day and took part in wherry races at sea off Great Yarmouth and Lowestoft in the early 1900s, which feature significantly in regatta press reports and of which MAUD is the last surviving example.  During her working life, MAUD was skippered by people from several locally famous families of watermen such as Powley, Farrow and Fox. Her link to the Broads was perpetuated when, at the close of her working life in the 1960s, she was purposely sunk on Ranworth Broad to end her days as river bank reinforcement.  MAUD has featured on screen in two television documentaries (2005 and 2015), the antiques programme Flog It (2007) and on Radio Norfolk (2016).  She is a well-documented vessel and her archive includes a collection of historic photographs, press cuttings and a video diary of her 18-year conservation project.  Certain fittings from MAUD’s later life as a motor wherry have been retained and preserved in a local museum, where they contribute to the wider knowledge of cargo carrying across the region. MAUD has been recorded on the National Register of Historic Vessels since 1999 and is part of the National Historic Fleet.

The Norfolk trading wherry emerged as a local hybrid design approximately 300 years ago, when the then existing Ceol hull was combined with the incoming Dutch innovation of the Fore and Aft rig, into a vessel of superior speed and handling characteristics, that could move a greater volume of goods at increased speed, thus enhancing the profitability in its operation.  Heavily loaded until the side decks were awash, the wherry’s build and shape allowed it to carry goods safely and effectively. MAUD was one of the larger wherries built specifically for the timber trade on the River Yare between Great Yarmouth and Norwich.  As such, she was designed to carry up to 40 tons of wood in one lading and featured a taller tabernacle than similar vessels in lesser trade, to facilitate the stacking of her timber cargo above as well as below deck, whilst retaining the ability to fully lower her mast to navigate bridges with as little as 7-foot air draft.  MAUD’s hull form remains as built and no changes have been made to her shape.  As the second largest surviving clinker-built historic vessel on the Broads today, MAUD has a huge aesthetic impact in the local environment, as her graceful sheer line and enormous black sail can be seen on the rivers from many miles away.  She is based alongside the other surviving trading wherry ALBION at the Forsythe Wherry Yard in Norfolk, in the waters where she would have traditionally operated. When on display, she is moored at riverside inns or staithes where she would have spent her working life. On those occasions, the centre hatches are lifted and stacked at either end of the hold to demonstrate how cargo would have been loaded whether manually or by using the gaff as a derrick.  MAUD now carries passengers in place of timber and acts as an education resource.

The wherry that refused to die, MAUD was twice raised from watery graves and after being submerged for sixteen years has been restored to sail again on the Broads. MAUD is a typical Norfolk trading wherry, one of two surviving under sail. She was built in 1899 by D S Hall, of Reedham, for Walter C Bunn, a timber yard manager and river haulage contractor of Great Yarmouth. Her hull was of oak planks and frames, and she had a pitch pine mast. Walter Bunn already owned her sister craft Dora, and in 1902 commissioned another, Shamrock, the last trading wherry built by Hall. At this time MAUD was skippered by members of the Powley family and carried timbers and general cargoes in connection with Bunn’s business. She would also take part in the occasional race: the last wherry race off Yarmouth in 1902 saw MAUD beaten into second place by Dora.

The three sister wherries were sold in 1911 to the Yare and Waveney Lighter Co of Norwich, to carry general cargo. MAUD was skippered variously by Tom Wright, Tom Bates and ‘Nolly’ Farrow. The owners began to replace wherries with large steel lighters towed by steam tugs, and MAUD and her sisters were sold in 1918 to J S Hobrough, of Norwich. Hobrough was a river transport contractor and civil engineer and he removedMAUD's mast and used her for carrying mud from his dredging operations. She would be loaded with 45 tons of mud by a grab dredger and then be towed or quanted to the unloading site where the mud would be removed by two men using shovels and wheelbarrows. For most of this time MAUD was skippered by ‘Nolly’ Farrow junior, the son of one of her previous skippers.

In 1940 Hobrough’s business was taken over by May, Gurney & Co Ltd, who continued to use MAUD as a dumb lighter. After the war she was given a Kelvin engine and carried cargoes of coal and sugar beet. In the early 1950s she was damaged by a crane grab when unloading coal at Norwich Power Station. As her hull was already in poor condition the opportunity was taken to give her a thorough overhaul. Most of the planking from waterline to deck was replaced, as were the decks; the tabernacle was cut down to increase clearance under bridges, and the wooden mooring timberheads were replaced with iron bollards. MAUD spent her last working years carrying dredged mud from the Broads to Whittingham or elsewhere. Finally May, Gurney & Co replaced their wherries with modern steel lighters.

In the mid 1960s Ranworth Broad, kept as a nature reserve by the Norfolk Naturalist Trust (NNT) was suffering erosion and the wherries MAUD and Bell were sunk as protection for the narrow spit of land separating the broad from Malthouse Broad. In 1976 when a nature trail was set out space was needed for a floating conservation centre and it was decided to move MAUD to a point of land to the north where she was resunk and filled with mud. There she lay until 1981 when the NNT decided to pile the bank because of coastal erosion and MAUD was given to the present owners who had been looking for a restorable wherry for many years, on the understanding that she would be restored. Needless to say, by this time she was in wretched condition.

On 2 June 1981 MAUD was raised and the new owners reinforced her hull, pumped her out, removed the mud and plugged leaks to prevent her sinking. In July 1981 she was towed to Eastwood Whelpton’s boatyard at Upton Dyke. A substantial roof structure was erected to protect her and the restoration began. Most of the frames were replaced and half of the planking, all in oak. The stem, sternpost, keel, decks and after cabin were rebuilt and a new pitch pine mast was made from a 47ft baulk of timber, 14 inches square, imported from Belize. Most of the work was done by the owners aided by Colin Buttifant, a boatbuilder of Upton. Her original vane is preserved in the Bridewell Museum, Norwich.

The monumental restoration took 18 years and in 1999 (her centenary year) MAUD was re-launched, recommissioned on 20 September, and sailed again for the first time in 60 years.

Trips are available to members of Wherry Maud Trust. Membership forms on the website. 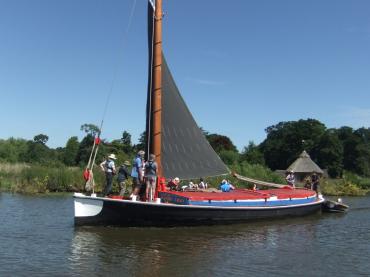