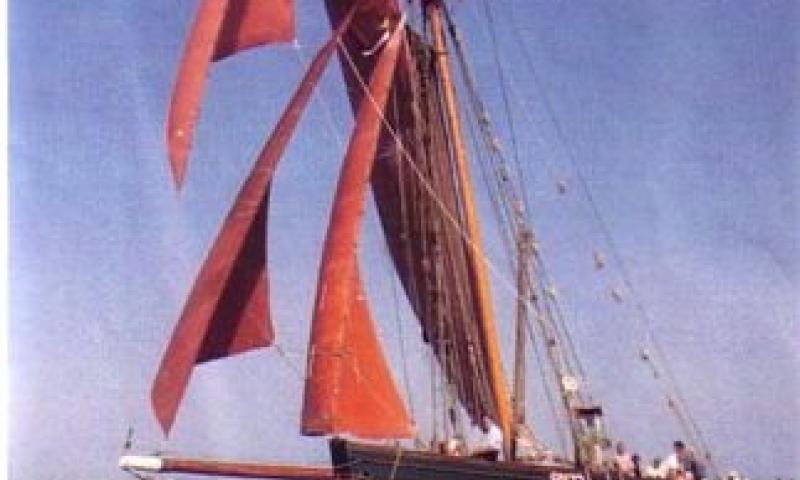 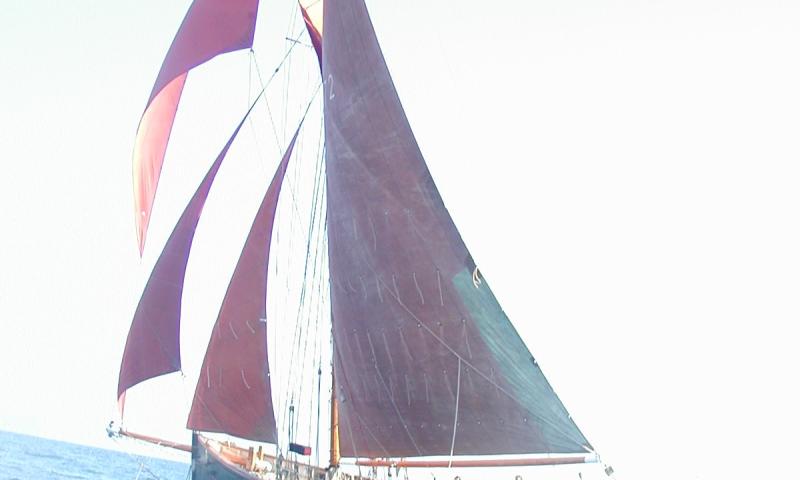 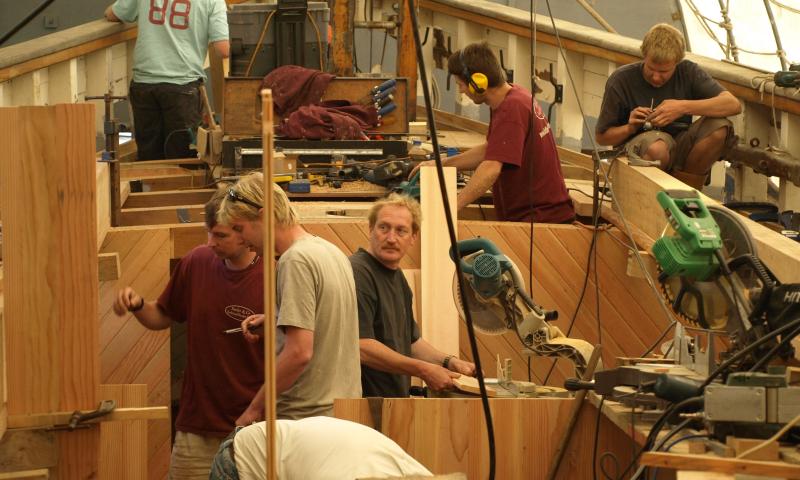 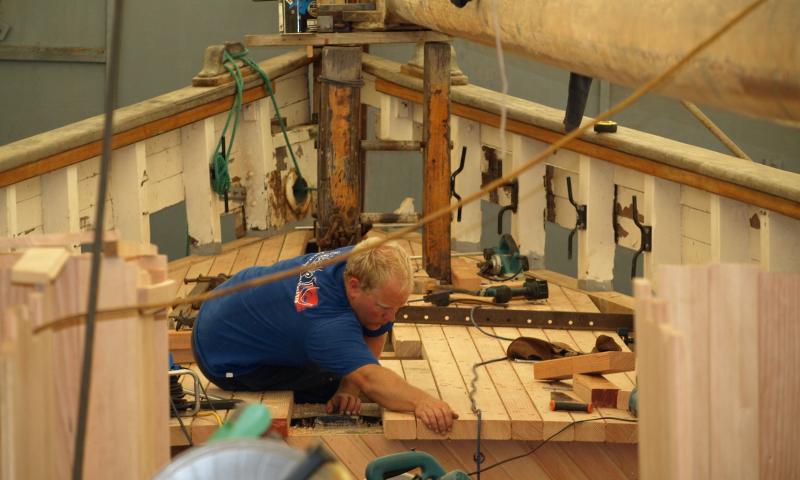 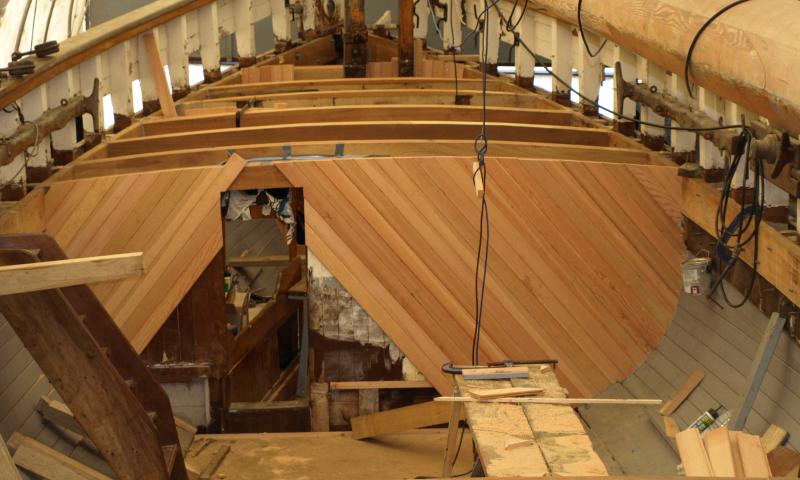 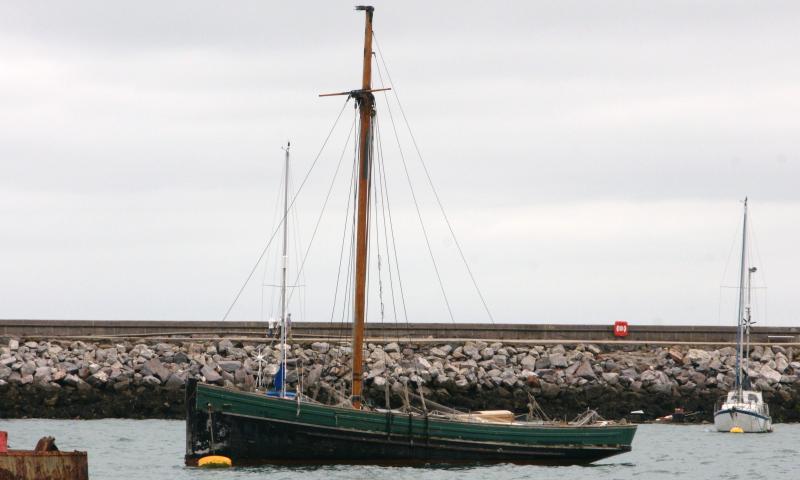 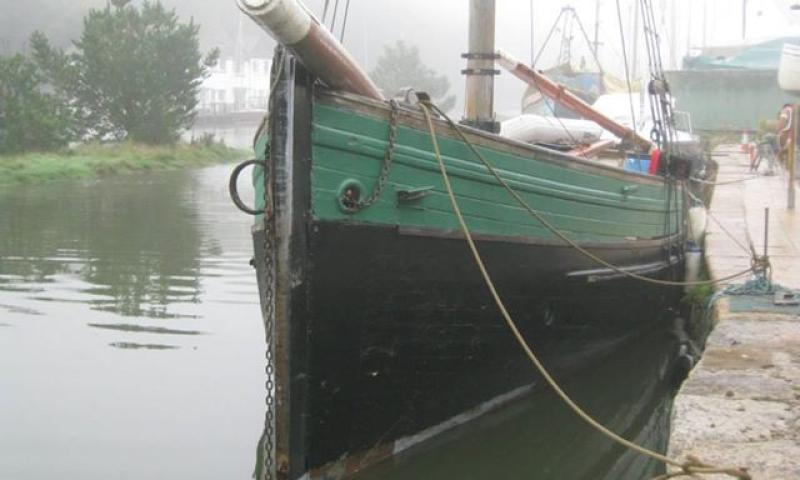 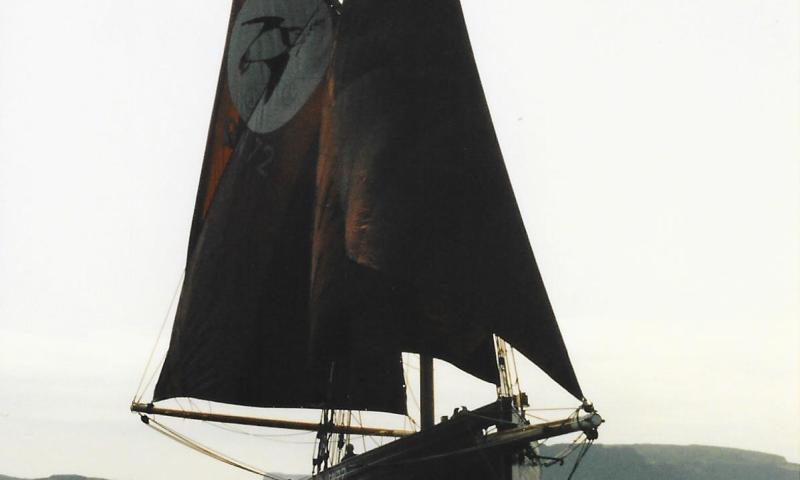 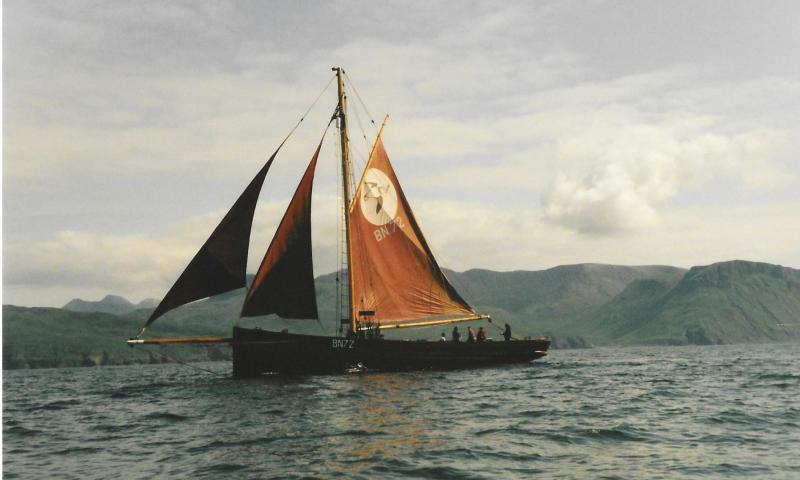 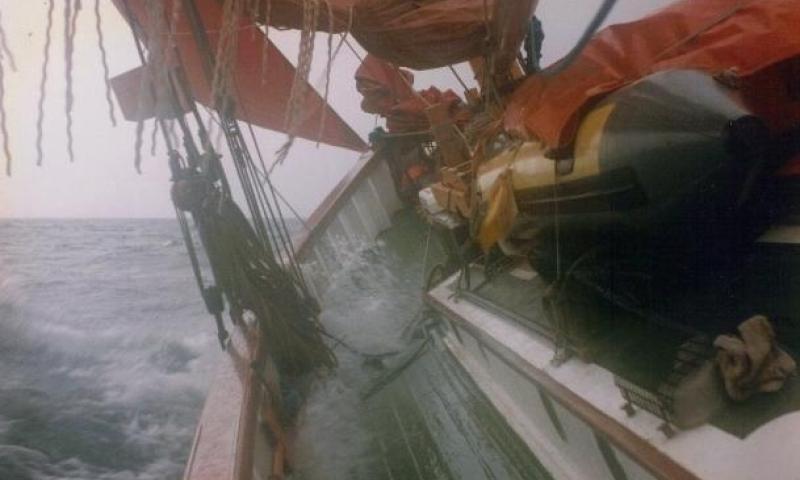 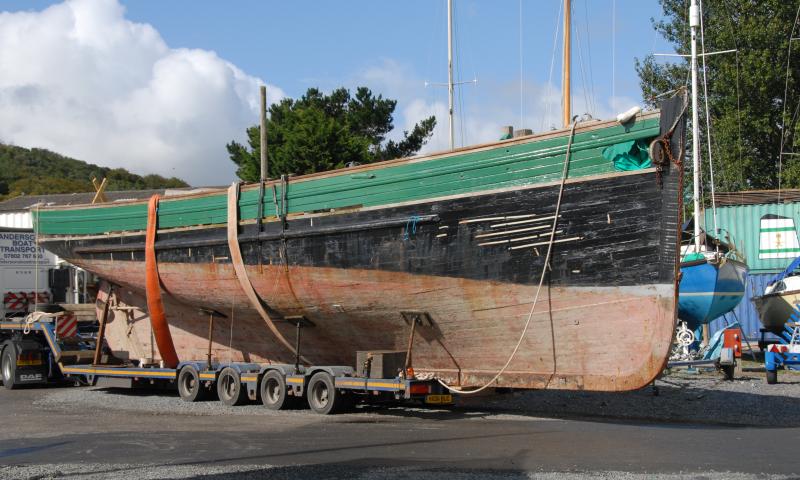 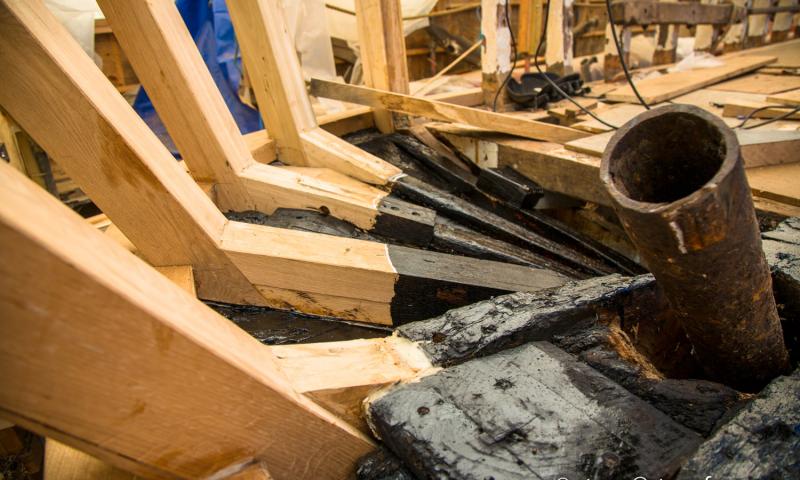 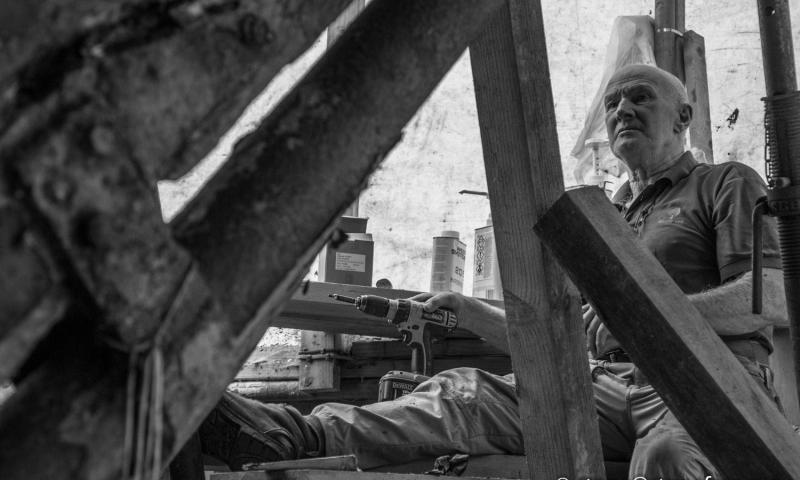 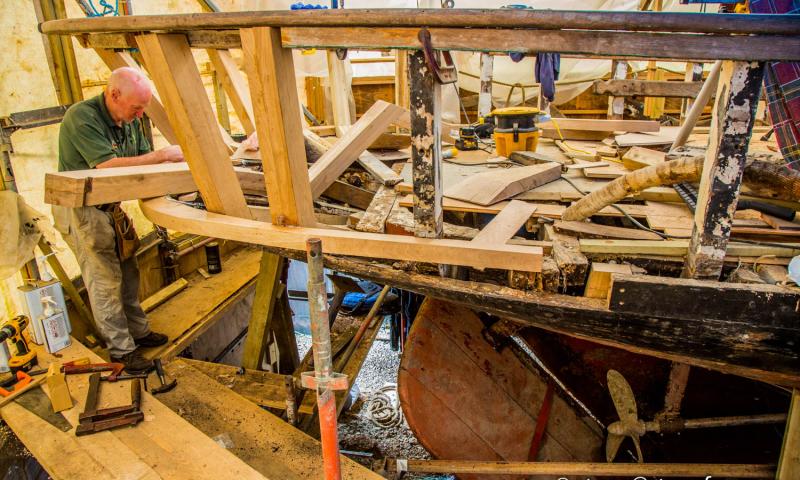 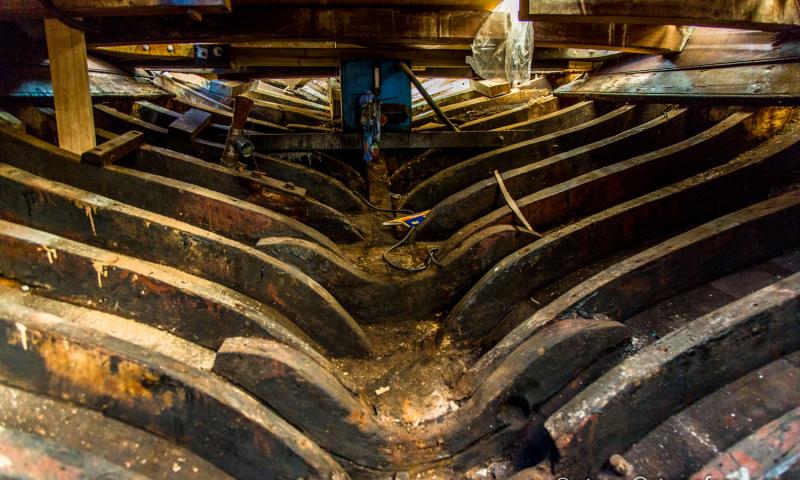 BRITANNIA has a radical design for a vessel of her kind, evidenced through her slender, deep hull which resulted from consultations between her owner, Alfred Rake and the builders, the Worfolk Brothers of Kings Lynn.  She was strongly built of single grown oak frames sourced from Sandringham Forest, the Worfolks being Royal boatbuilders.  This made her as much as 30% lighter than similar sized craft.  Her frames have survived intact, as have part of the beam shelf, knees, bilge stringers, sternpost, keel, stem, keelson and all the floors, as well as some 30% of her planking which was built from 2 inch Siberian redwood and Scottish larch, fastened with 5 inch galvanised spikes.  In the 1920s and 1930s, she was adapted for use as a power trawler and her interior was later changed for use as a charter vessel.  Her broken bulwarks and heavily scarred hull timbers were replaced during the 1970s and other conservation work using like-for-like materials was also carried out at this time.  She was originally rigged as a gaff cutter, although she later changed to a cutter and has since been fitted with a Volvo D130 engine with hydraulic drive.  Her mast was of 10 inch diameter pitch pine, but neither her rig nor her deck fittings survive today.

BRITANNIA was a Boston smack, commissioned by Alfred Rake, a local fisherman who lived and worked in Kings Lynn, and has a strong association to the East Coast. The tradition for East Coast fishermen to name their boats after J class yachts may have meant that Alfred once crewed on the King’s yacht BRITANNIA.  She was the last and largest Class One smack to be built by the Worfolk brothers and the largest vessel built in the Friar’s Yard for 40 years. In her early life, BRITANNIA was involved in several incidents, first running aground on the Long Sand in the Wash, then bringing home the crew of a Russian ship found in distress.  She was later caught in the ice when the Ouze froze over in about 1918.  As the last and largest whelker to be launched and carry a topmast, BRITANNIA is significant for telling the story of the decline in the fishing industry in the Wash during the two World Wars.  In later life, she was owned by the Samuels family for over 25 years. 1979, she featured in the HTV series, “Smuggler” and had bronze cannon from Berkeley Castle fitted to her bows.  She won the Concourse D’elegance award in 1995 at Falmouth Classics event, for the best kept working boat.  She is well documented with newspaper articles of her launch, registration documents, photographs, handwritten letters, and log books from the 1980s-1990s.  Models of BRITANNIA survive in Kings Lynn Museum and one is owned by a relative of Alfred Rake living locally.  She has been recorded on the National Register of Historic Vessels since 1997.

BRITANNIA’S primary purpose was as a whelk trawler, although she was later used as a motor fishing vessel and then a charter yacht.  She was the longest whelk trawler ever built at 60 feet and, unusually she was fine and deep drafted, unable to dry out on the sandbanks as was normal practise for a vessel of her type.  Instead, she carried an open boat on deck, anchoring off the sandbanks for her crew to catch whelks from this boat, then returning at speed to port with her load.  Her lines were similar to those of revenue cutters and she was very fast enabling her to reach harbour ahead of others, thus securing the best price for her cargo.  She retains this shape today and is aesthetically pleasing with long slim lines.  BRITANNIA is flush decked and has little headroom down below which is a legacy from her original function as a workboat.  She is now stabilised out of the water under cover in Gweek, Cornwall waiting for conservation work to return her to operational use as a charter boat (in which guise she spent almost 50% of her life).

The last, and largest, whelk trawler to be built on the east coast, SPIRIT OF BRITANNIA was built for Alfred Rake by his brother-in-law, Walter Worfolk, and his sons, Gerald and William, at King’s Lynn. Worfolk was from a Yorkshire boatbuilding family and had moved to King’s Lynn in 1899. The new vessel was launched with the name BRITANNIA from the Friars boatyard on the River Nar on 1 April 1915, and rigged as a gaff cutter. She is believed to have been planked in 2” Archangel redwood fastened with 5” galvanised spikes, and cost £290 exclusive of sails and rigging. Her mast was of 10” diameter pitch pine.

Soon after the launching she ran aground on the Long Sand in the Wash. Her bottom was so fine – she drew 8’ 6” in ballast – that the crew were able to walk ashore along the mast. She was not damaged. During the First World War BRITANNIA had a friendly encounter with a German U-boat. Well to the east of the Sunk buoy she met the submarine on the surface. Some of the German crew came aboard and exchanged a few bottles and some food. The crew of BRITANNIA decided to say nothing of the incident – fraternising with the enemy was frowned upon. In another incident she was caught in the ice when the Ouse froze over in about 1918: food and fuel were taken out to her by improvised sledge. In 1917 BRITANNIA brought home the crew of a Russian ship found in distress and Alfred Rake fed and slept them for some time before they could be repatriated. They departed eventually and nothing more was heard until 1939 when one of the survivors came to King’s Lynn as an officer on a timber ship and got in touch to thank Alfred and his crew.

Later she became a motor fishing vessel. Running aground in fog on a spit in 1968, when going up to Boston Haven, the steep bank caused her to capsize and sink. A fire crew pumped her out but her owners could not afford to put her back into working order. She was sold and taken to Lowestoft for a failed attempt at re-rigging her.  In 1973 a carpenter named Haydn Samuels bought her and worked on her restoration at Bristol.

The above history of BRITANNIA was recalled by one of one of Alfred Rake’s grandchildren, who sailed on the trawler in about 1930 as a sort of mascot. The crew brought her shells, exhausted birds (including a government carrier pigeon), a model yacht found at sea, and a young seal which was fed on whelk and lived for several years. In return she would dance and sing for them.

From 1974 to 1997 SPIRIT OF BRITANNIA operated as a charter yacht on the west coast of Scotland. She was then taken to the Hamble, from where she continued to offer sailing holidays.

She was acquired by the Trinity Sailing Trust, of Brixham, in 2007 and underwent an extensive refit in 2008. She was then engaged in youth training work and charters, sailing to the Scilly Isles, with berths for ten guests and three crew. In 2011 she was laid up because charter work was scarce.

At the end of 2019 BRITANNIA was safely stored in a purpose built shed 20 miles from the sea, and was being restored by a volunteer workforce.  In June 2019 it was reported that the team received a grant from the Association of Industrial Archaeologists which will pay for the vessel's rig, and work on that had already started. 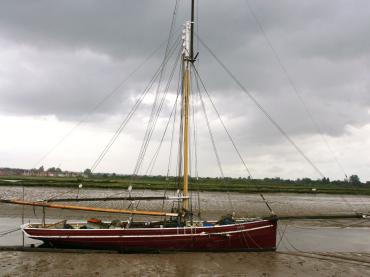