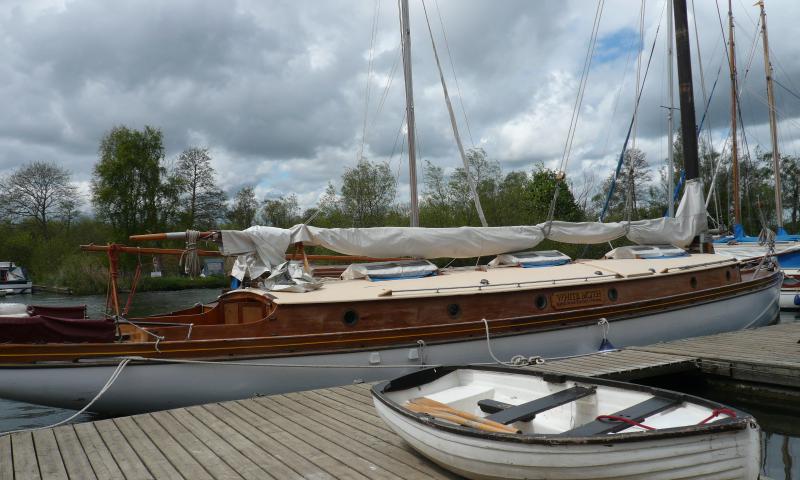 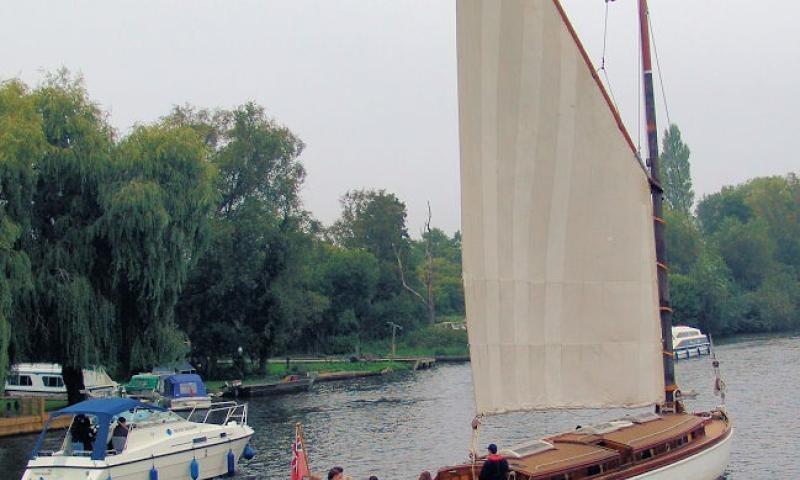 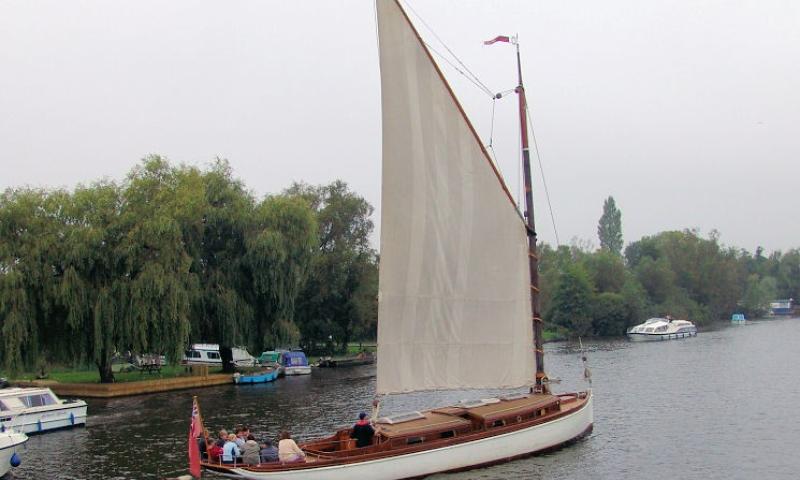 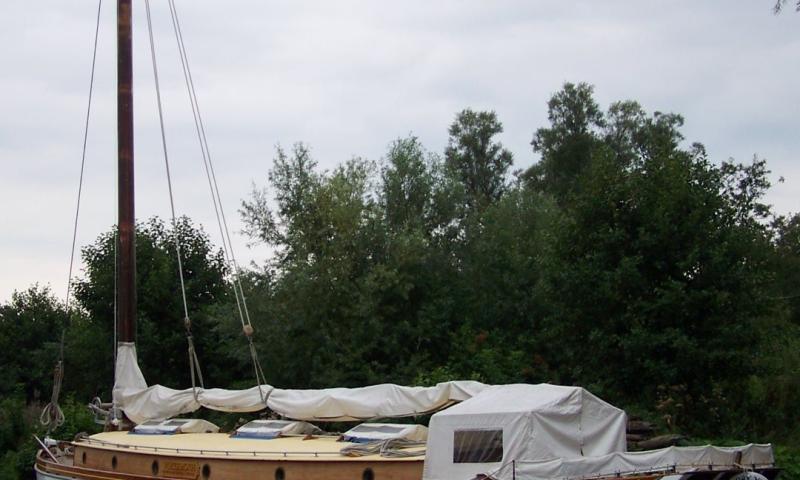 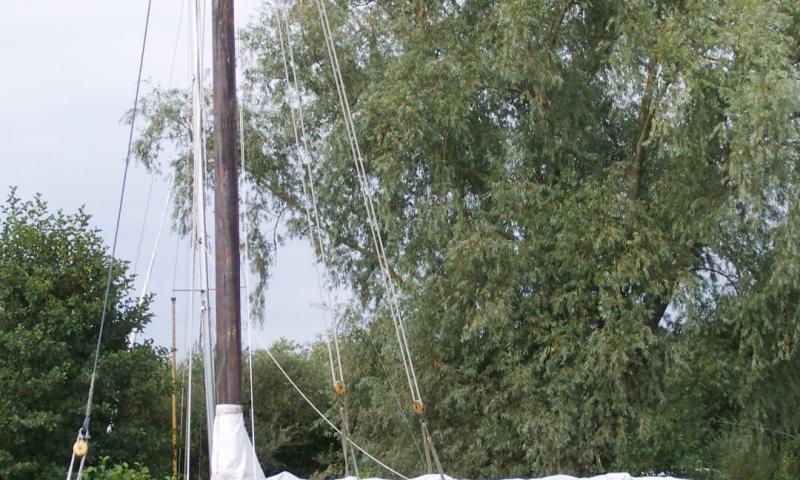 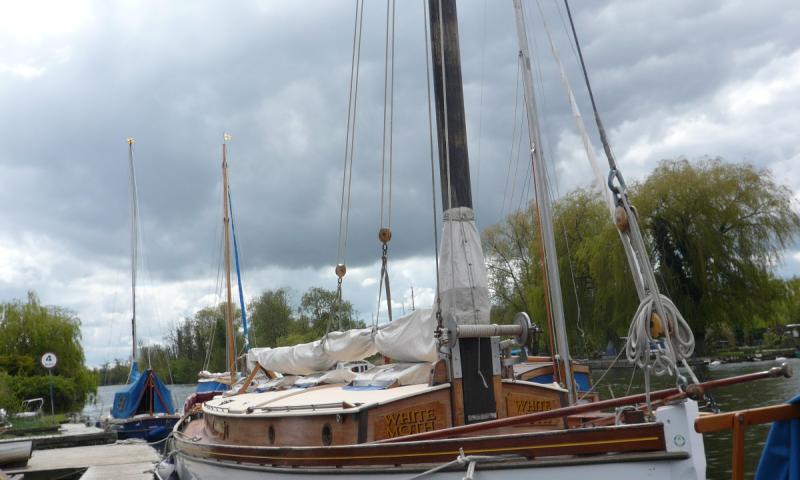 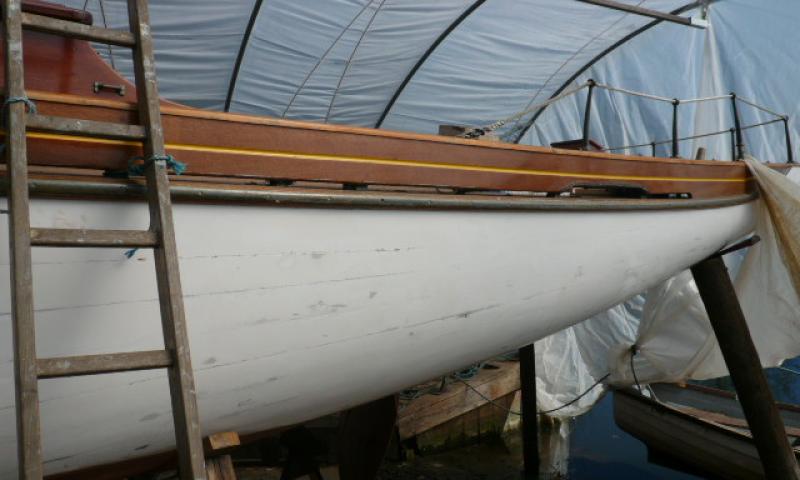 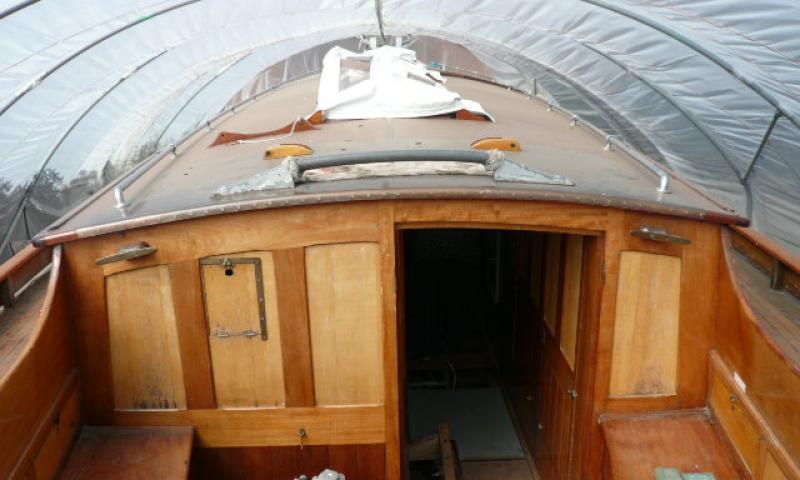 The 59ft WHITE MOTH was the final wherry yacht to be built.  Although she has spent most of her life in hire WHITE MOTH was originally built for Arthur Moore and commissioned in June 1915.  She spent her first 5 years privately cruising the Broads before Ernest Collins bought her back to supplement the other wherry yachts in his hire fleet for the 1921 season. She remained in hire, under sail, until the end of the 1956 season when she became a houseboat at Wroxham for the first time until the end of the 1962 season.

Ernest Collins sold her sometime after the 1962 season to John Lindford who slowly restored her from a static hulk to full sailing order with the refitting of her rigging and engine.  John and his family used her for cruising the Broads and even took her to Barton regatta one year.

By the late 1960s her fortunes had changed again.  She reappeared for one year in the 1967 Blakes catalogue as a houseboat at the Neatishead boatyard and was sold to a Mr Hyde following John Lindford’s untimely death in 1969.  Two years later, Len Whiteside bought her for £300 from a couple who had lived on board and, so the story goes, had fallen out, as a result of which one of them had vented their anger by cutting a hole in the hull which caused her to sink in a small dyke at Neatishead!  Ted Withers assisted Len when he raised WHITE MOTH and took her to Newsons Yard on Lake Lothing to have her bottom replanked.  Len continued to work on her with his wife but given the costs of restoration and maintenance they never managed to complete the work before they parted with her in 1976.

By the late 1970s she had been purchased by Simon Mitchell who moved WHITE MOTH to Surlingham before she changed hands again in 1980 and was pulled out of the water on Bell’s slip in Brundall.  She subsequently ended up with large holes in the hull which were eventually patched up and she appeared semi-submerged in the marina at St Olaves about 1984 prior to being taken to Great Yarmouth Quay for restoration.  A year later, just as events appeared to be taking a turn for the worse again, she caught the eye of Colin Facey who bought her for £1000 with the help of his father, Stan Facey, and took her back to his Horning yard.

Over the next four years she was finally transformed from a lifeless hulk back to her former glory by the renowned Norfolk Boatbuilder Maynard Watson.  On completion of the work, she joined Colin Facey’s Hire fleet for a season before changing hands and going to Broads Tours.  Two years later, she was purchased by the Norfolk Broads Yachting Co, which initially operated her from St Olaves prior to its acquisition of the Southgates Yacht Station in Horning.  Following her latest change of ownership and whilst in the care of WYCCT, WHITE MOTH has undergone several changes including the fitting of a steel keel, a new vane and linoleum on the coach roof as well as the decks.