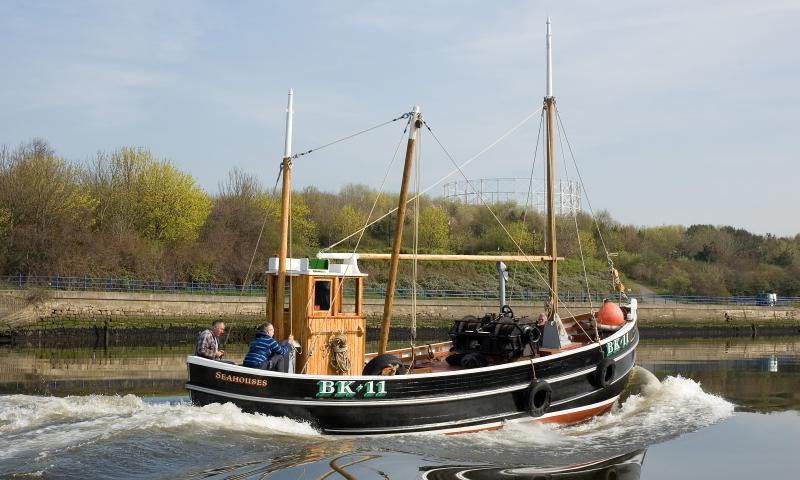 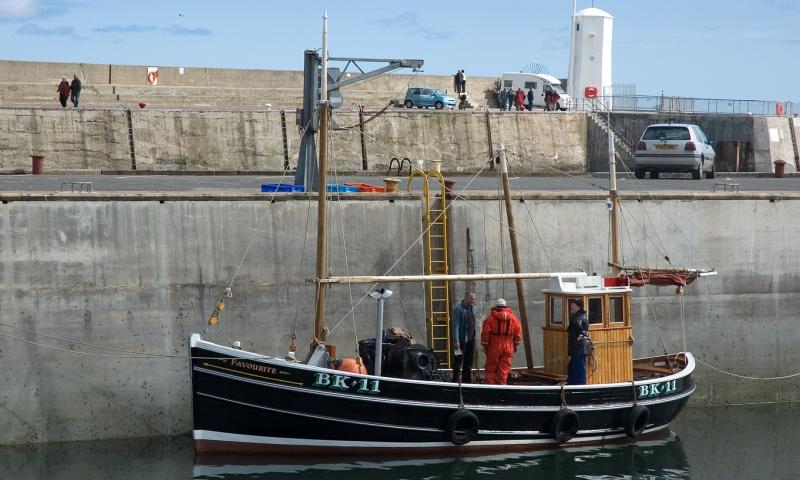 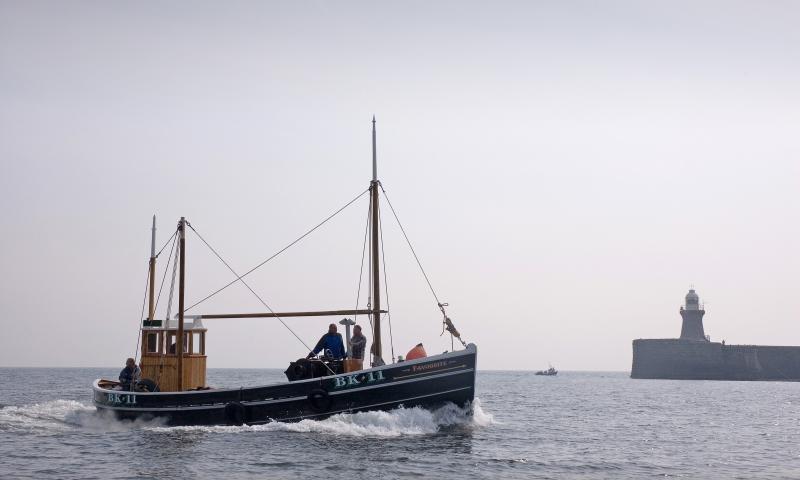 Function Fishing Vessel
Location Newcastle
Current use Museum based
Available to hire No
Available for excursions No
Info required No
Web address www.nemaritimetrust.co.uk

1.  What is the vessel's ability to demontrate history in her physical fabric?

The hull and superstructure have not been compromised by alteration since ending work as a fishing vessel.  Overall dimensions are 36’ long, 12’ 2” beam and 5’ draft.  Repairs have been undertaken to original standards and materials.  Framing is 90% original, hull planking 95%, deck 50%, bulwarks 60%, masts and spars 20%, crew accommodation 70%, fish hold 60%, steering gear believed original.  The original Kelvin Engine and gearbox had been replaced circa 1960 with a Gardner product, another Gardner engine (a 6LXB) was fitted later and continues in good order.  One fuel tank was replaced during restoration.  Deck machinery probably dates from the 1970s or 80s.  Wheelhouse is not original but dates from the 1960s when the present aft positioned one replaced a similar one amidships.  A part of the crew accommodation had been removed to suit a diesel heater but this has been re-instated to original pattern and a coal stove fitted again.  The paintwork has been replaced but replicates that typically carried by vessels of this type in the 1950sand 60s.

FAVOURITE was formerly a seine net fishing boat, built in 1947 by Walter Reekie at St Monance in Fife.

She started her working life at Castletown, Isle of Man, in the hands of Jackie Maddrell and his sons; she was then known as “Margaret Anna” and carried the number CT101.  The stay on the island was not long for she was soon at Amble, Northumberland, in the hands of the Handyside’s, with the number changed to BH35.  In the 1950s, she was bought in a run-down condition by Bill and Michael Robson and taken to Seahouses, being renamed FAVOURITE with the number BK11.  They undertook a lot of work and altered her configuration from that of a centre wheelhouse with large stern well, to the conventional arrangement she has today.  They also replaced her original Kelvin engine with a Gardner 5LW.  She once sank in Seahouses harbour but was recovered.  After 20 years, she was sold back to Amble as BH49 and worked there briefly before purchase by Peter Nisbit of St Abbs.  He cared for her for the next 33 years.  During his ownership she was numbered LH149.  He also made changes including fitting a Gardner 6LW engine and rigging her for trawling.  Prior to then she had been rigged for seine netting, as well as being able to work pots etc.

Like many old boats, she was lucky to survive.  St Abbs is a difficult harbour to enter in all but the best conditions and on one occasion FAVOURITE struck a submerged rock, tearing off a bilge keel.  With water rapidly flooding the bilges she was driven flat out into the harbour and run up the small area of beach - she avoided being entirely sunk.

The central importance of a boat in a fishing family is illustrated by the ownership in the Nisbit family.  As Peter Nisbet said when negotiating to sell for preservation (almost in tears): “with this boat I was able to marry my wife, buy a house, and rear three children; every penny we had was earned by her”.

In February 2006, her working life came to an end but her rarity was recognised by members of North East Maritime Trust; being one of the last survivors of her type.  FAVOURITE was restored in 2007 under the supervision of Tyneside’s last wooden boatbuilder Fred Crowell, in his boatyard at South Shields.

FAVOURITE’s form may be described as a “canoe sterned  seine netter”.  The hull is of a type developed soon after the introduction of motors to fishing vessels and of a shape suited to manoeuvrability, a most useful characteristic for working ring nets and for seine netting, where a tight turning circle enabled efficient fishing.  The keel is shorter than earlier vessels and the propeller is well under the stern to avoid catching nets.  The “canoe stern” enables the rear of the vessel to swing easily, yet gives lift when hit by a following sea.  The gunnel or capping rail is low (as is the deck) to ease hauling of gear by hand.  The masts and spars are arranged for fishing methods of the mid 20th century.  The main mast lowers onto the wheelhouse roof to reduce rolling when sitting at sea.  There is a Gilson post for lifting the cod end of a net.  A derrick is fitted for unloading the catch at port.  There is a mizzen mast with a gaff sail to steady the boat in a swell when sitting at nets or when drawing pots.  The wheelhouse is designed only to protect the helmsman and his controls, being insufficient to accommodate the whole crew.  The form suited seine netting as well as the working of pots for shell fish and was later adapted for trawling.  The accommodation caters for three persons to live whilst working from “foreign” rather than just the home port.  The fish hold is of limited capacity but adequate for daily catches.

FAVOURITE was built in 1947 from the Fife yard of Walter Reekie. Built for the Isle of Man as MARGARET ANNA CT101, the boat moved to Amble, Seahouses and then St. Abbs before passing into the care of some of the Trust members odf the North East Maritime Trust in 2006. She is now fully restored.