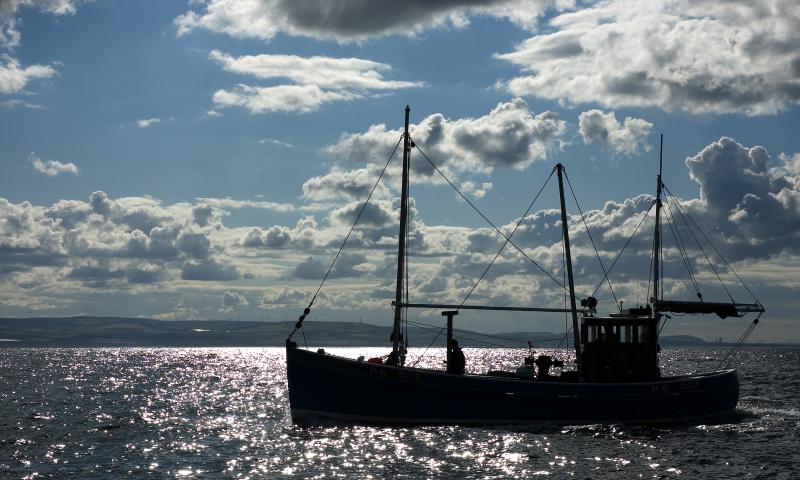 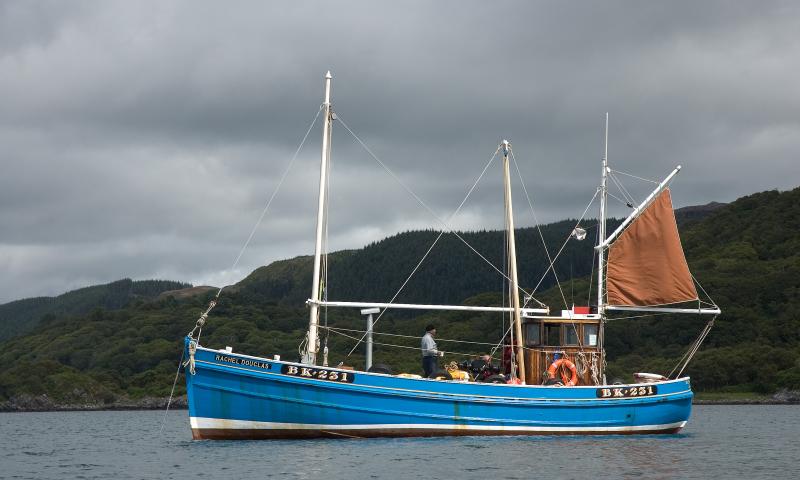 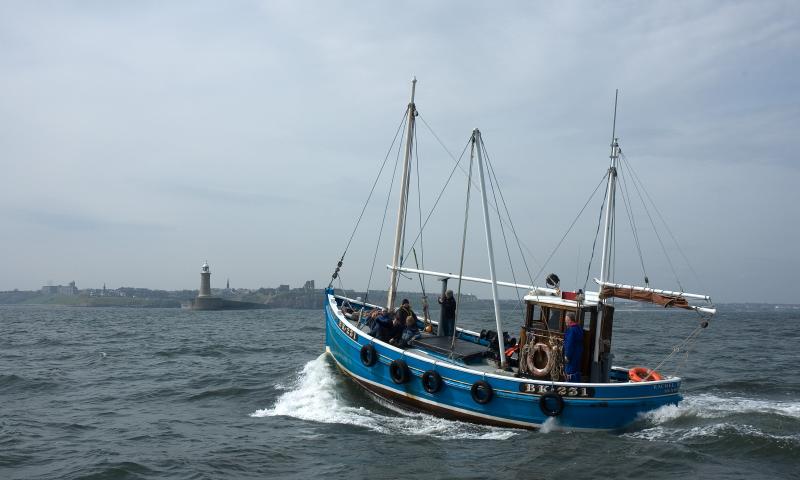 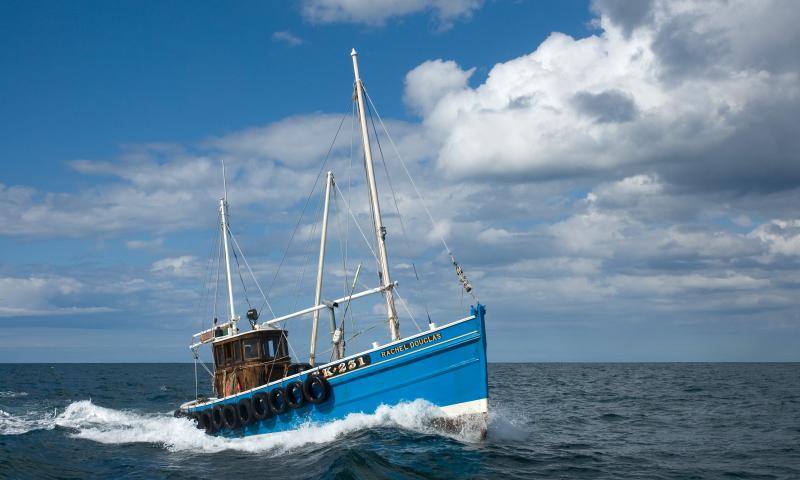 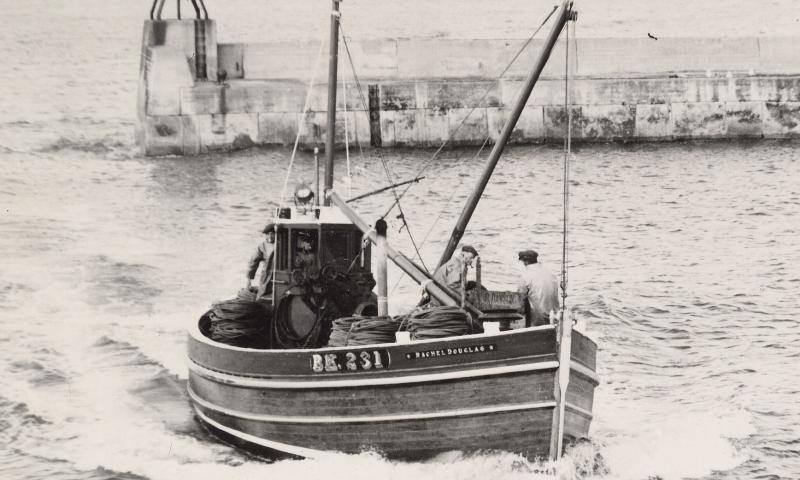 1.  What is the vessel's ability to demonstrate history in her physical fabric?

The hull and superstructure have not been compromised by alteration.  Overall dimensions are 39’ 11” long, 13’ 10” beam and 6’ draft.  Repairs have been undertaken to original standards and materials.  Framing is 95% original, hull planking 95%, bulwarks 50%, masts and spars 25%, crew accommodation 90%.  The deck had been replaced during restoration.  The fish hold has been altered to incorporate a toilet and galley, though these are concealed behind removable fish hold compartment boards and posts.  The boat’s original Kelvin engine, and a replacement, were succeeded by the present Gardner 6LXB fitted circa 1965. Fuel tanks were replaced during restoration but are similar to those previously installed.  Deck machinery is original (though for a time adapted to trawl).  Steering gear is also believed to be original.  The present wheelhouse is not original but was acquired about 1965 from an older boat that was having a modern one fitted; it is larger than the original but still typical of the pattern fitted to this type of vessel.  The paintwork has been replaced but replicates that carried throughout from the 1950s to 2002 - based on paint sampling and contemporary photographs.  The blue colour has been associated with Seahouses fishing craft since at least the start of the twentieth century (and probably much earlier).

The fishing vessel RACHEL DOUGLAS was built in 1947 for Jackie Baxter-Douglas and his brother Thom. They named her after their mother.

The Baxter-Douglases lived and worked at the north Northumbrian village of Seahouses and they had an old vessel in need of replacement.  New fishing boats were in great demand after the war but engines were hard to obtain, however, William Weatherhead and Sons accepted the order for their yard at Eyemouth, some twenty miles up the coast, just over the border.  Unfortunately, they could not provide an engine so the family’s old boat had to be sacrificed to provide one until such time as a new one could be obtained.

The RACHEL DOUGLAS was completed with the old Kelvin 44 engine installed and ready for launch.  The builders had fitted carved nameboards with the name spelt wrong – not a good omen.  The name was corrected and the owners and family were taken by car to Eyemouth intending to take the boat to its home at Seahouses.  After leaving the harbour at Eyemouth the old engine failed and they had to return to port; repairs were needed and the family, instead of enjoying the voyage south, had to hire a taxi home.  Matters were soon resolved and the RACHEL DOUGLAS started a successful career working seine nets and ring net out of Seahouses, whilst filling in with potting at times.  During the autumn herring season the vessel would migrate to other ports with a partner boat to ring net for as long as good catches could be sustained.

A little while after completion a new engine was delivered and fitted, a Kelvin 88; no doubt substantially improving the boat’s power and reliability.

RACHEL DOUGLAS was a lucky boat (or maybe the brothers were very skilled hunters).  When at the Herring fishery off Whitby in 1950 or ‘51, she had to call for two other boats to take her excess catch after taking an outstanding shoal.  Sometime later, when she caught the largest catch of herring off Seahouses, she and her partner boat filled up, then she dragged the net (still full of herring) and deposited it on the beach in Beadnell Bay.

In 1963, Jackie and Thom looked for a larger vessel and obtained a larger ringer, Amalthea, from Campbelltown; RACHEL DOUGLAS was put on the market and sold to John Wilson of St Abbs, a couple of miles north of Eyemouth.  John and his son Ian worked the boat for the next 39 years during which time she was kept smartly in her blue trim and continuing with her original registration BK231.

John and Ian made a few changes.  They obtained a different wheelhouse, slightly longer, but fortunately in keeping with her lines; it is actually older than the boat, having come from another vessel which was being refitted with a new one.  They also converted the Rachel to become a trawler, fitting her with rigging and tackle for trawling the seabed; the old winch was adapted for this purpose.  A newer engine was also fitted, a secondhand Gardner 6LXB.

A small group of North East Maritime Trust members purchased the vessel in September 2002 and a couple of months later she was moored in the St Peter's Marina, Newcastle.  In order to undertake the extensive repairs that were needed they engaged the assistance of boatbuilder Fred Crowell of South Shields.

RACHEL DOUGLAS's form could be described as a “cruiser sterned ringer seiner”.  The hull is of a type developed in the 1940s for fishing vessels and of a shape suited to manoeuvrability, a most useful characteristic for working ring nets and for seine netting, where a tight turning circle enabled efficient fishing; however the stern is shorter and perhaps more robust than that of the “canoe stern” type.   The overall length of the boat is one inch short of 40 feet to comply with contemporary inshore fishing regulations.  The gunnel or capping rail is low (as is the deck) to ease hauling of gear by hand.  The masts and spars are arranged for the fishing methods of the mid 20th century.  The main mast lowers onto the wheelhouse roof to reduce rolling when sitting at sea.  There is a Gilson post for lifting the cod end of a net.  A derrick is fitted for unloading the catch at port.  There is a mizzen mast with a gaff sail to steady the boat in a swell when sitting at nets or when drawing pots.  The form was generated to suit a range of fishing functions including drift, ring and seine netting; as well as working of pots for shell fish.  The size is sufficient to work the ring net and accommodation caters for four persons to live aboard whilst working from a “foreign” (rather than just the home) port, such as was the practice when following herring shoals.  The fish hold was of generous capacity for the volume expected when herring fishing.

Built in 1947 by James Weatherhead at Eyemouth, RACHEL DOUGLAS is a fishing vessel of wooden carvel construction with a Gardner diesel engine model 6LXB.  Her first owners were Jackie and Thom Baxter-Douglas of Seahouses, Northumberland from which port she worked until the early 60s when sold to John Wilson and taken to his home port of St Abbs.  She was later purchased from his son Ian in 2002 for restoration by three persons with a concern for fishing heritage.

From 1947 to 2002, she was registered as BK231.  At some time whilst she was moored in St Abbs, the vessel was converted from a ringer/seiner to a trawler.

RACHEL DOUGLAS is a rare survivor of a medium sized fishing vessel of the mid twentieth century. She is typical of large quantities of boats built around Scotland and north east England for inshore fishing, and is not dissimilar to those built elsewhere around the British Isles. The hull design illustrates the move away from sailing boat practice with a short keel and the propellor well under the stern to permit manouverablilty for ring netting.

RACHEL DOUGLAS is owned by North East Maritime Trust's close affiliate, "Northumbrian Fishing Heritage Trust" yet operationally managed by NEMT.  The vessel is in excellent sea going state of repair and is subject to planned annual survey and maintenance.  When not on public display at Newcastle Quayside she can be seen at St. Peter's Marina, Newcastle.  Otherwise, RACHEL DOUGLAS takes part in river and coastal events from Portsoy to Whitby. 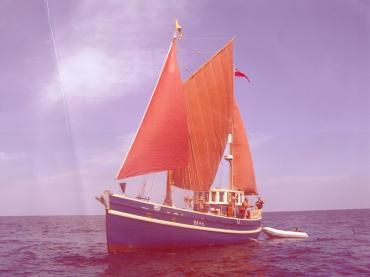 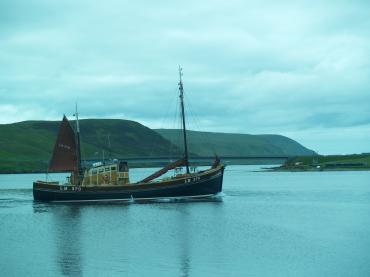 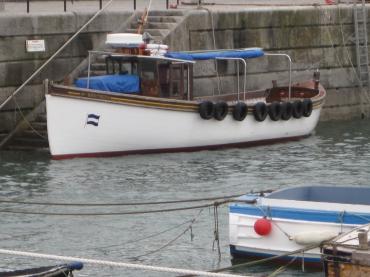