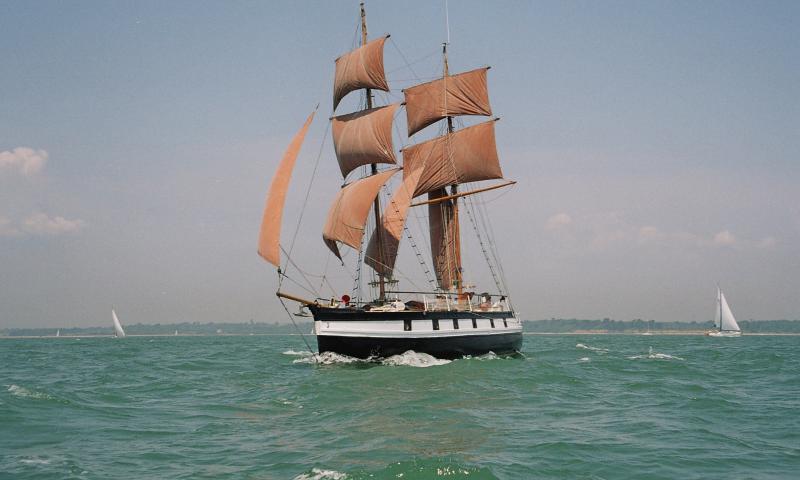 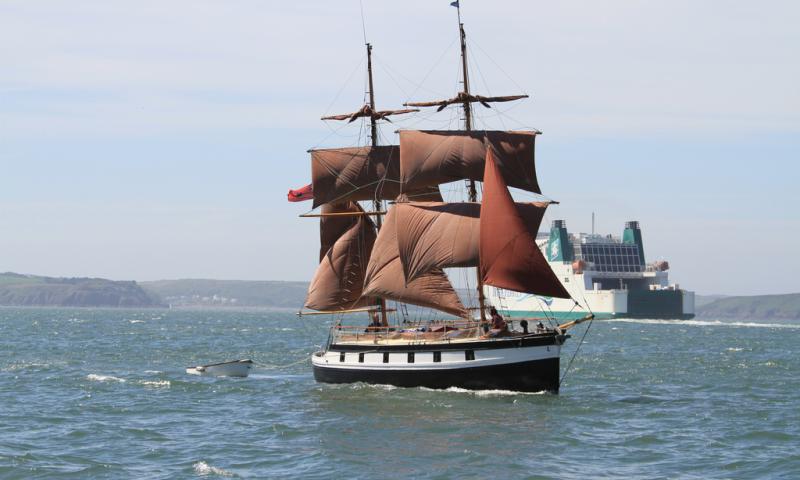 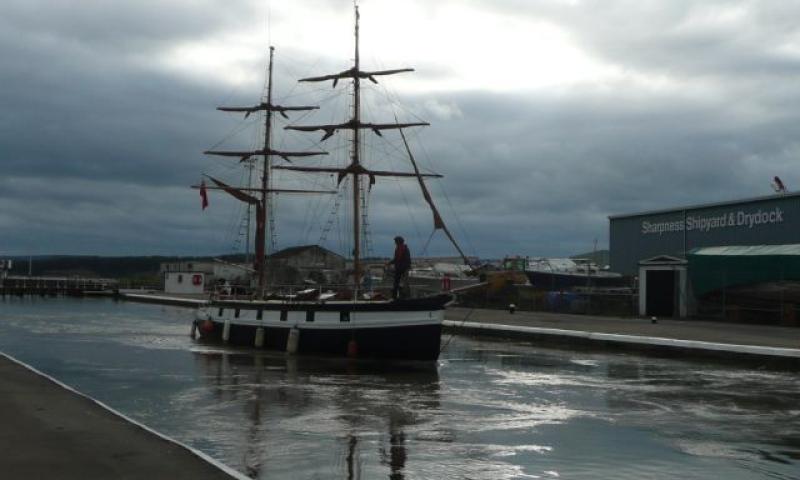 MARJORIE was built by David Munroe and Sons of Blairmore on the River Clyde in 1913.  Her construction was of pitch pine carvel planking on oak frames, fastened with copper nails. The main propulsion was an internal combustion Vertical 4 Cycle Petroleum/TVO engine built by L Gardner and Sons also in 1913. She was fitted with a Ketch steadying rig which, in the autumn of 1938, was converted to Brig rig and she continues to sail with this configuration today. The two masts and the timber spars were constructed to Vice Admiral Bell Davies’s design by Mowlens, with sails set from the deck rather than aloft.  Her sail configuration is traditional although Bending Sails and Crossing Yards were adapted by Vice Admiral Bell Davies according to his own recollections. Her engine has been renewed four times since new in 1913. The current engine is an inboard four-stroke diesel, made by Vetus (Hyundai), with four cylinders.  Despite several refits after various incidents (1945, 1949 and 2007), her form remains relatively unchanged although her bow was altered in 1979 to accommodate a modern anchor.

Little is known about MARJORIE’s early history, although she is believed to have been requisitioned for service as a Thames River patrol boat during the First World War 1914-18. Her previous, and possibly first, owner was Air Commodore Upfill-Brown (a member of the London Stock Exchange), but her most significant ownership came in 1938 when she was bought by Vice Admiral Bell Davies – one of the first naval pilots and one of only four to be awarded the VC.  He was the first man to land on an aircraft carrier, became a driving force in the development of strike warfare and was among the last cadets to be trained under sail. Bell Davies was actually sailing MARJORIE in summer 1939 when he received his joining instructions from the Admiralty and he did not see her again until 1945.   In the interim, MARJORIE was rammed and badly damaged by a launch from the Depot Ship MAIDSTONE although the yard managed to salvage her and get her sufficiently seaworthy for a return to Portsmouth in 1945.

MARJORIE is remarkable for having remained in the ownership of a single family for the majority of her life, with the Bell Davies family having now sailed her for the last 77 years. She is well documented with records including visitors books from 1938-2015, handwritten design notes by Richard Bell Davies, as well as builders’ invoices for work done.

MARJORIE has a pointed bow with a plum straight stem and a cruiser stern. Her current rig, whilst unusual for a vessel of her size, reflects the ownership of the Bell Davies family and their naval connections, giving her the unique look of a Nelson-era warship in miniature.  She continues to sail for the purpose for which she was built, remaining in private ownership as an operational vessel.

MARJORIE was built in 1913 by David Monroe & Sons as a ketch-rigged motor yacht, but was converted to a brig in 1938. Her hull is carvel built of pitch pine on oak frames, fastened with copper nails. She has a pointed bow with a plum straight stem and a cruiser stern. The current engine is an inboard four-stroke diesel, made by Vetos (Hyundai), with four cylinders. MARJORIE served in the First World War as a Thames River Pilot Boat, with her original Gardner paraffin engine and ketch steadying rig. In 1938, she was purchased by Captain R. Bell Davies VC CB DSO AFC. He re-rigged her and sailed her until 1939. She was laid up in Weymouth during the Second World War after being rammed and sunk. MARJORIE was refitted in 1946, but a fire onboard three years later made a second re-fit and a new engine necessary. In 1966, she was inherited by his son Vice Admiral Sir Lancelot Bell Davies KBE and, between 1975 and 1981, she was taken to Belgium and Italy. In 2007 due to damage and general wear, MARJORIE was transported to Sharpness Shipyard & Drydock in Gloucestershire where she had an extensive refit lasting two years. She is now sails the Bristol Channel and West Country. Ownership remains within the Family with Lady Bell Davies, her Son and two Daughters.

Roberts, Bob, Last of the Sailormen
Classic Boat: Revival of the Fittest, October 1999