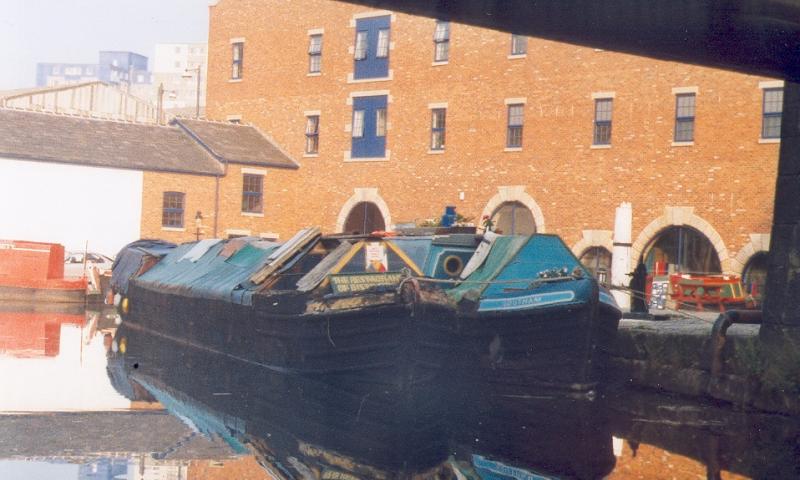 Walker Brothers of Rickmansworth was one of the most successful boat building businesses on the canal system. In the 1930s, when the Grand Union Canal Company Ltd. (GUCCCL) decided to upgrade its main line from London to Birmingham with wider locks, new boats were also ordered in three classes - royalties, stars and towns. Royalty boats were built of wood or steel by a number of builders including Walkers and were distinguished by having five foot sides and being capable of carrying seventy tons. Star class boats were of the more usual depth of four foot two inches and were built by Yarwoods of Northwich, Harland & Wolff at North Woolwich and Walker Brothers. The Northwich and Woolwich boats were composites. The Town class were named after English towns and villages, again built by Walkers, Yarwoods & Harland & Wolff. They had four foot nine inch sides. Walker Brothers were given orders for sixty-two butties and aimed to produce two boats per week (a target seldom met because of the lack of good timber). An aggressive marketing campaign aimed at bringing in new cargo work was not completely successful and some of the boats were laid up on completion. Recruiting crews was another problem as the GUCCCL was not known as a good employer.

The outbreak of the war in 1939 meant a boom for canal traffic, and women trainees were recruited. ELTON is a 'big ricky' butty, launched in 1937. She was first registered as fleet number 186 on 21 September 1937 and her Grand Union gauging number was 12731. She worked for the GUCCCL and later British Waterways, paired with motor ELSTREE on the London to Birmingham line. In 1960, ELTON was sold to Willow Wren, a carrying company set up and subsidised by waterway enthusiast Captain Vivian Bulkely-Johnson. However, in 1968, she changed hands again and was bought by David Blagrove, a teacher and canal enthusiast. He used her in the retail coal trade, selling from the boat moored on the canal bank.

In the late 1980s, ELTON was repaired and fitted out as a rudimentary houseboat. She was sold several times as her value decreased and her condition deteriorated until she was finally abandoned at Southall in West London in 1994. British Waterways offered her to a Trust and she was towed to Runcorn by the motorboat BEN. It was intended that she would be sold on to a suitable purchaser, prepared to carry out major restoration. So far no such person has been found and she is currently used as a floating shed to house the bric-a-brac collected on the Trust's recycling trips.