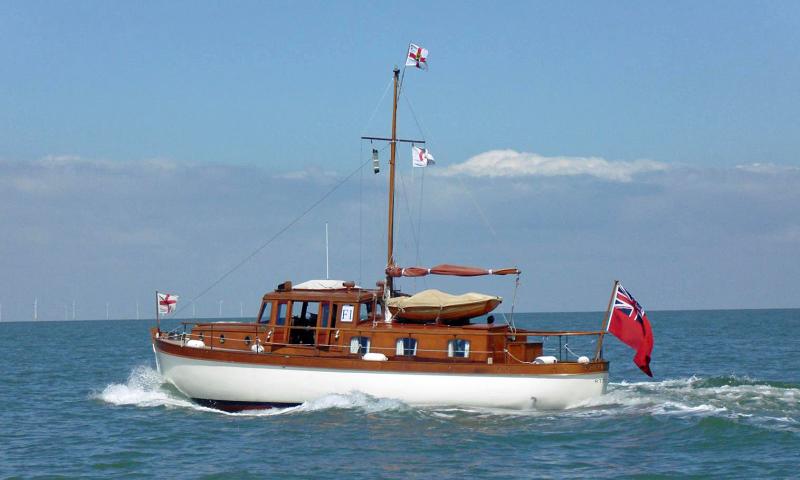 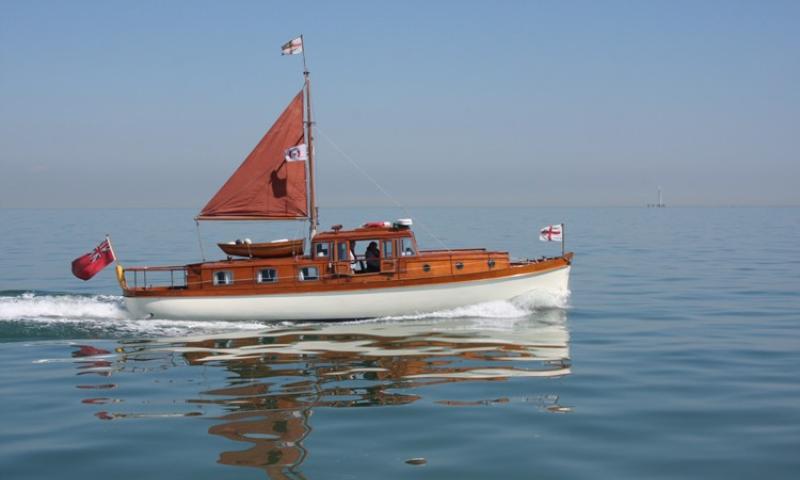 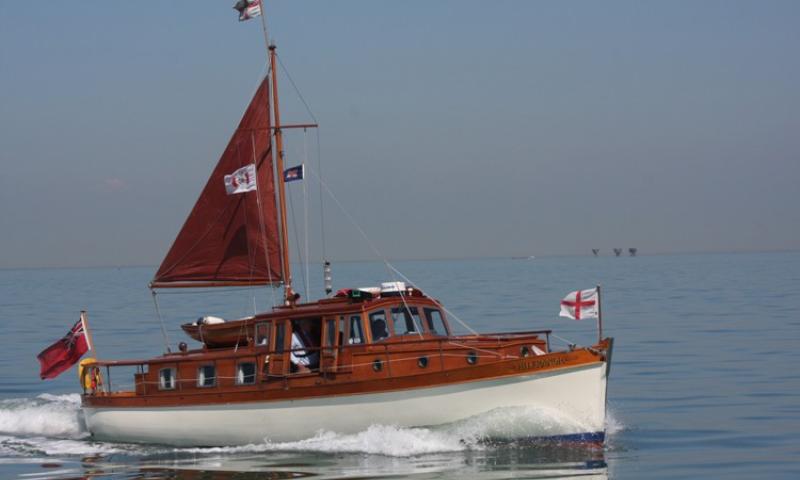 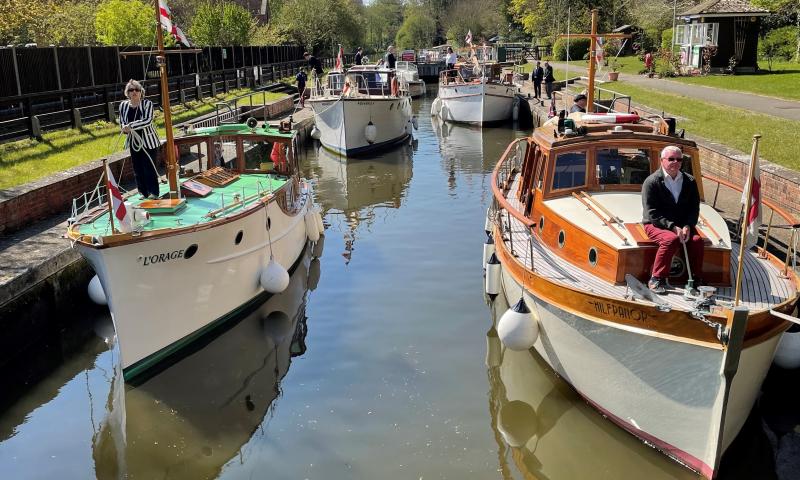 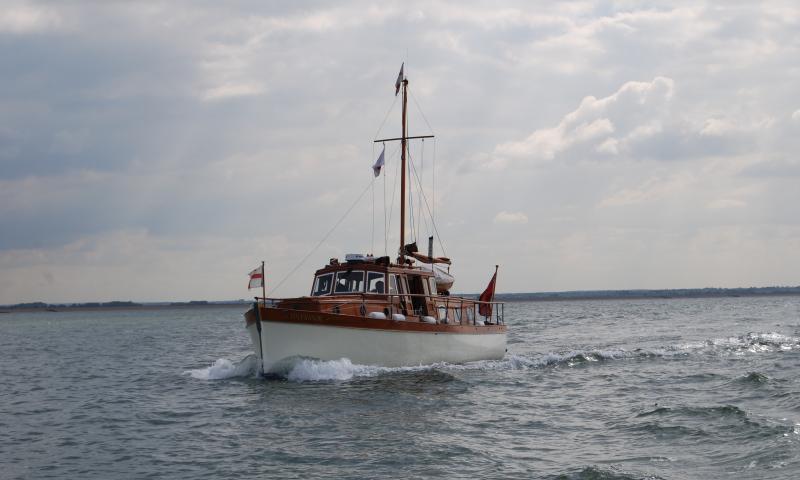 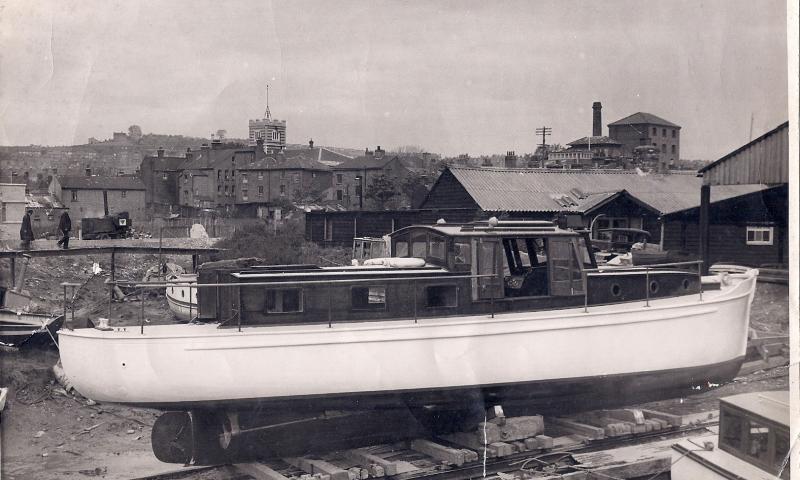 HILFRANOR is a 41ft twin screw gentleman’s motor yacht with a mahogany carvel hull on oak frames; plumb bow; and canoe stern, which was added to her design during her construction. Originally built to go to sea, she has small twin side keels and a large main keel and was fitted with a mast and steadying sail which is still in operation. In addition she was built with twin screw engine, a feature of vessels designed for coastal cruising at the time. Much of her original hull material has survived showing a doubling up of the ribs – evidence of wartime damage during her involvement in the Dunkirk evacuation. Her layout is largely original including her mahogany forward topsides and rudder, though minor modifications have been made to the design of the wheelhouse which was re-built in 1989. Other original features include a chrome ship’s bell and rope, recovered from a previous owner, which reflect the overall Art Deco style of her build. Adaptations were previously made in the 1980’s including metal framed windows, radar, and autohelm, all of which were later removed to return her to a more original state though her electronics and engines have been updated. Other alterations include her gunwhale which has been changed to follow the whole sheerline and her galley which has been moved to the aft of the saloon. Her interior has been fully restored and the layout is in-keeping with the period.

Following the war HILFRANOR was re-registered in London as number 179 in 1955 with official number 164629 restored to her. Her original twin 20 hp Morris petrol engines were replaced in 1954 by two Standard Motor Co 40.hp diesels.

HILFRANOR has significant associations with the Second World War. She is listed in the Admiralty Patrol Craft from May 1940 until March 1943, after which she was laid up for a short period and then described as being in the fire service until 31 May 1945. Having been requisitioned by the Royal Navy, she was one of over 100 vessels collected by Douglas Tough of Tough Brothers Ferry Road Boatyard in Teddington to take part in Operation Dynamo. Upon requisition she lost her original British Registry number 81 of 1936. News film footage taken at the time, or shortly afterwards, show her with a Bren gun fitted astern of the wheelhouse. It is not known how many crossings to Dunkirk she made, but during her service she was straddled by bombs from German dive bombers. The attack cracked her frames and she settled into the shallow waters off the coast of France and was subsequently abandoned. It is believed that a group of French soldiers bailed her out, repaired her engines, and then sailed her as far as the Goodwin sandbanks off the coast near Ramsgate where she sank once again. There, she was spotted by a British minesweeper and towed into Ramsgate. In 1965, she was chosen to lead the flotilla of Dunkirk Little Ships for the very first commemorative journey, then organised by The Sunday Times. She is mentioned in a number of publications including The Nine Days of Dunkirk (David Divine.1959); Dunkirk (A .D. Divine 1945); and The Epic of Dunkirk (E. Keble Chatterton. 1940). She is also listed in The Ministry of War Transport List, the Dunkirk Veteran’s List, and the Tough Brother Papers. She has also featured in a number of film productions including Little Ships (BBC2. 2010) Coast (BBC2. 2016) and Christopher Nolan’s blockbuster film Dunkirk. HILFRANOR was listed on the National Register of Historic Vessels in 2001.

HILFRANOR is an aesthetically pleasing 41 foot twin screw gentleman’s motor yacht built from a unique design in an Art Deco style. She is of carvel construction with a displacement hull, meaning she is long and thin in shape, being only 9ft in the beam, allowing her to stay firmly in the water, with an additional 6ft canoe stern. Despite having an iron skeg, she weighs barely 8 tons. During an extensive restoration in 1988, her deck was re-laid with thick teak to reflect her original design and the cabins, including the covering wood, were finished in varnished mahogany and pine. The hull is painted in an Old English style of white paint which brings out the varnish of the gunwhale. HILFRANOR remains in operation as a leisure vessel, as she was originally intended.

HILFRANOR is a gentleman’s motor yacht, with a steadying sail, plumb bow and canoe stern. It is believed that her name came from the first owner’s three daughters: Hilda, Frances and Nora. She took part in the Dunkirk evacuation of 1940 and was one of the little ships gathered by Douglas Tough from the Upper Thames. She was crewed at Dunkirk by Jock Christie, W. Hills and V. Hissons. HILFRANOR came under air attack and cracked her ribs down both sides, whereupon she was abandoned. She was then found by a group of soldiers who re-floated her and managed to get her as far as Goodwin Sands, where she was later rescued by a naval minesweeper who towed her into Ramsgate. Following this, HILFRANOR was repaired and remained in naval service for the rest of the war, becoming a patrol boat and part of the fire service. With the advent of peace, her petrol engines were replaced by two diesel tractor engines. She was bought by an ex-naval officer, who kept her for the next thirty-seven years, operating out of Ramsgate. HILFRANOR had a major rebuild in 1990 at Coombes Boat Yard and has since been maintained in full working order.

When the first Little Ship return to Dunkirk was organised by the Sunday Times in 1965 HILFRANOR had the honour of leading the flotillla across the channel.