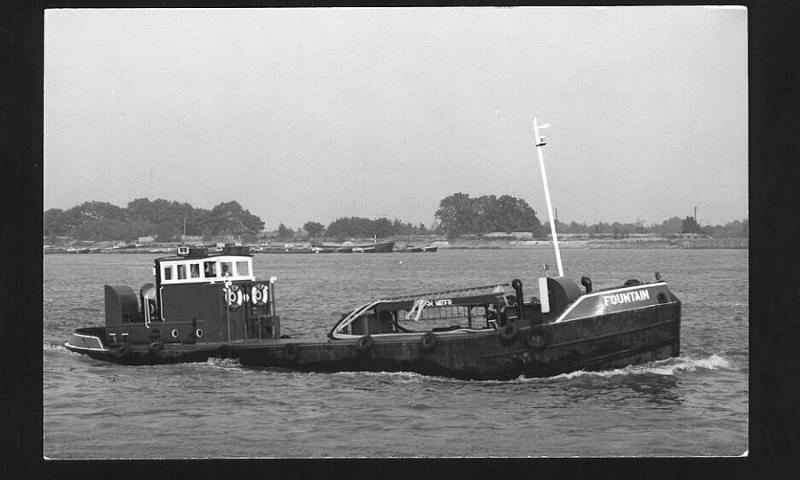 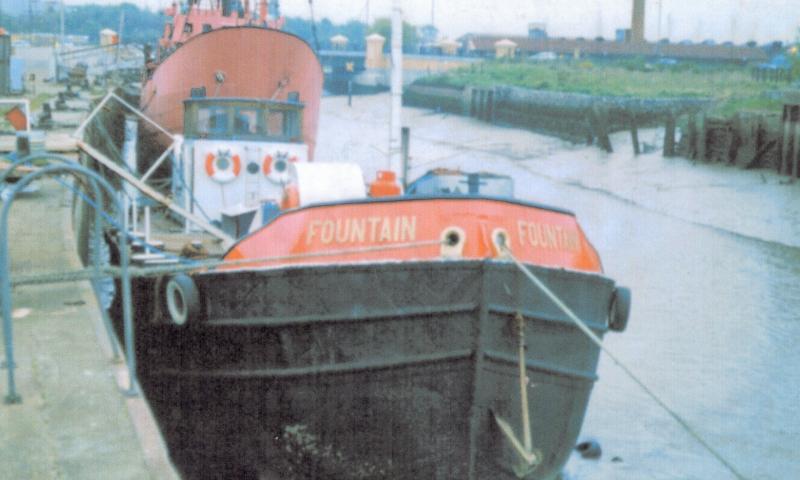 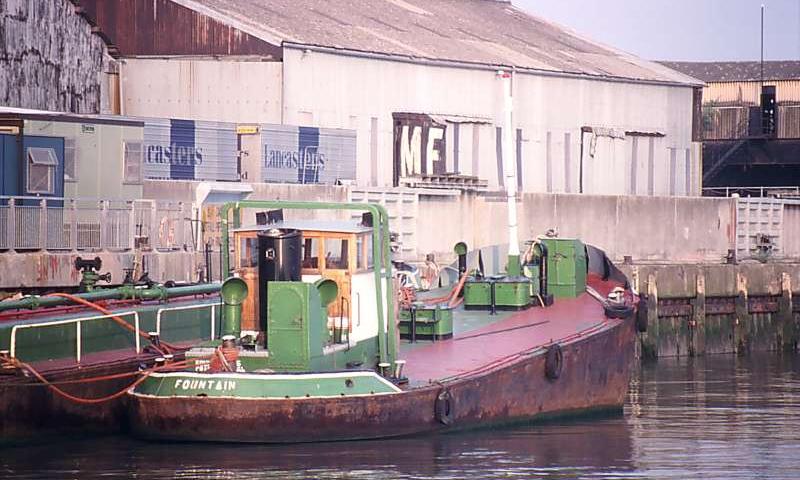 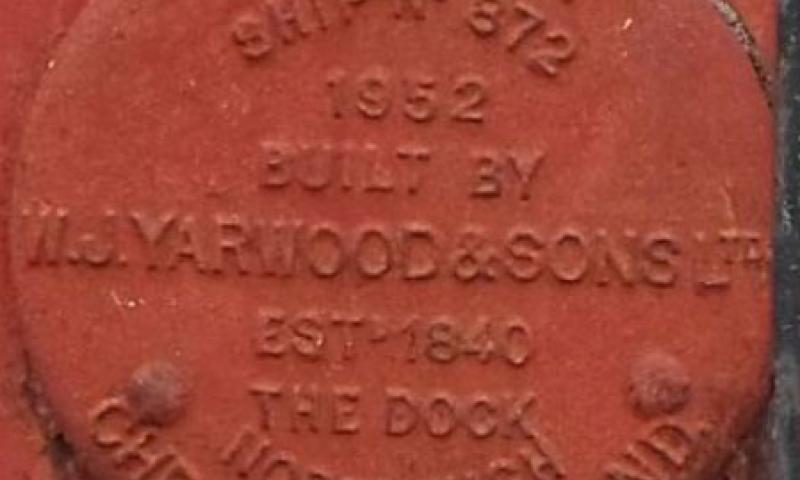 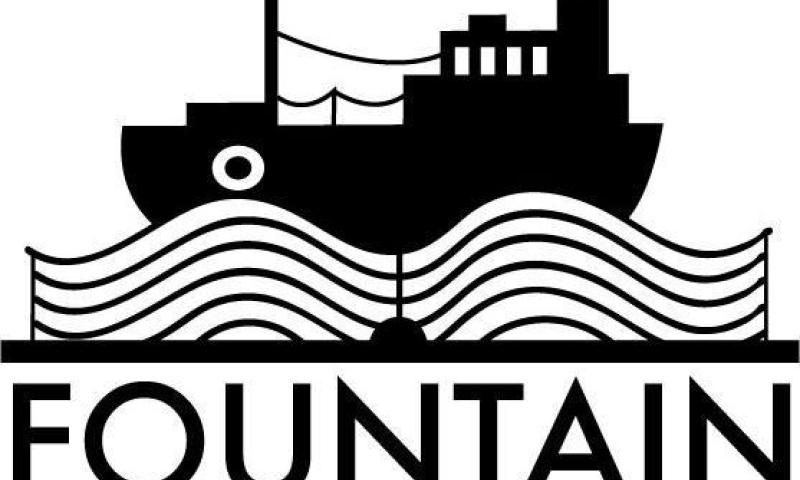 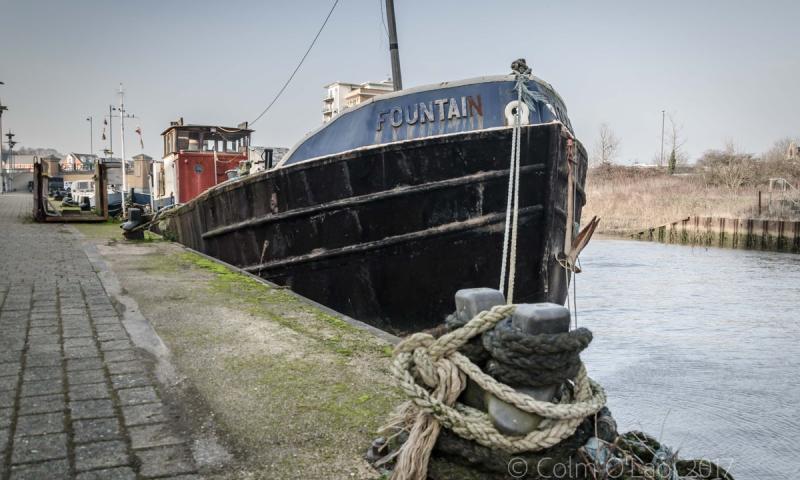 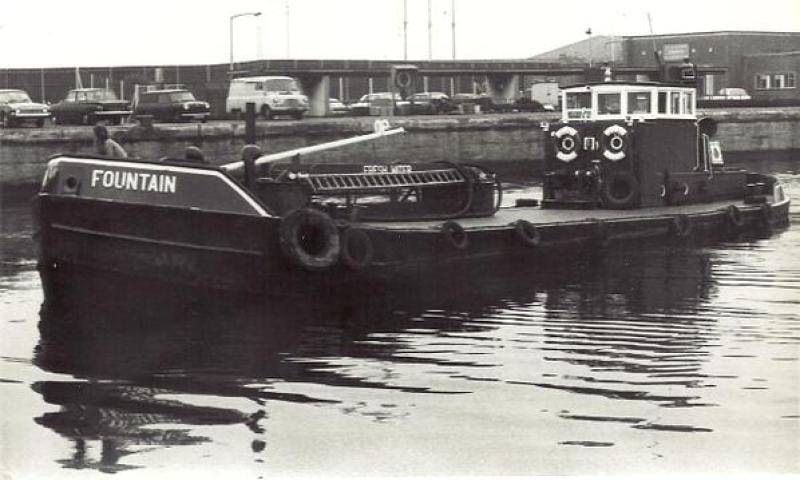 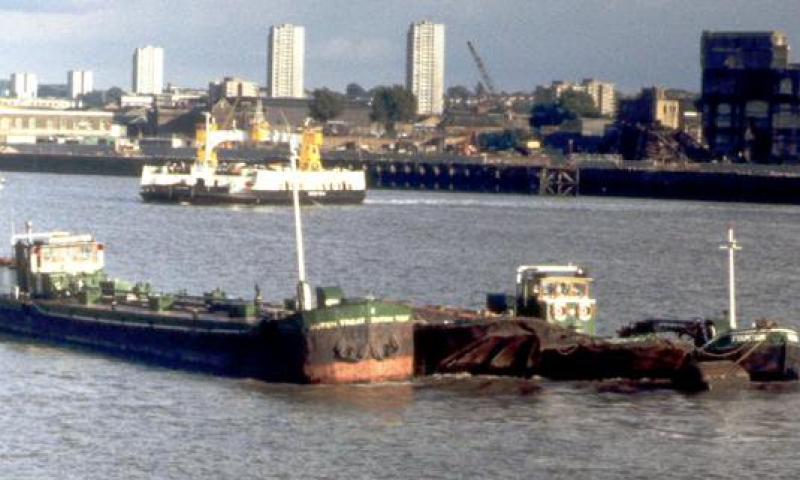 FOUNTAIN’s hull form has remained unchanged during the course of her life, maintaining its unique design with riveted bow. Her function as a water carrier saw the inside of her hull treated to prevent corrosion and made of a thicker grade of steel.  This has kept her in good condition and suggests that her design may have been based on that of X-lighters used during the Gallipoli campaign. FOUNTAIN retains much original fabric, fixtures and fittings, including a 4 foot high anchor windlass and hand crank for manual operation, deck fittings, mooring bitts, rear bollard and tow hitch. Her original wheel survives with accompanying chain steering.  FOUNTAIN also retains her original chain driven telegraph, made by A. Robinson in the early 1950s, which is believed to be the only complete and working telegraph of its kind in its correct setting. The wheelhouse itself is teak framed and made of steel with twin teak doors to the rear fitted with original brass fittings and locks. The front of the wheelhouse has its original ladder and sports the Yarwoods Shipyard build plaque. The wheelhouse sits above the engine room and is connected by an original speaking tube. Her original mast is in place and can be unstepped for passing under bridges. FOUNTAIN was the first Thames barge to be designed and fitted with the then brand new 121hp Lister Blackstone diesel engine. Her Blackstone air compression start engine is in original condition in a separate engine room along with her Petter stationary engine which is used to assist in the start of her main engine. Early photographs also indicate that the engine room portholes, lifting hatches and covered access doorway remain as they were in her working life.  Her yard number 872 is still clearly visible on the vessel.

FOUNTAIN was built in 1952 by W. J Yarwood & Sons of Cheshire, but her principal associations are with the London and Kent area where she spent her working life until leaving service in the 1990s.  She was purpose built as the flagship of C. Crawley’s fleet and was the only vessel built for the purpose of carrying fresh water to vessels on the Thames and Medway, working out the West Pier at Gravesend. FOUNTAIN is now the only surviving Thames water carrier from this period.  She served the Royal Yacht BRITANNIA on its visits to London. She is well documented with an archive which includes: the original log book; the full fleet lists for C. Crawley Ltd; the original colour coding scheme for differentiating pipes onboard; and many photographs of her working life. Her original house flag also survives depicting a bucket against a green background to represent her work as a water carrier.  FOUNTAIN has been recorded on the National Register of Historic Vessels since 2007.

FOUNTAIN’s unusual riveted bow is a striking feature of the vessel, with her strong steel hull made her robust for work as a water carrier.  Built as a modern version of the Thames barge, she had a high cargo capacity and her 3 cylinder engine gave her a speed of 7 knots when servicing vessels around the Thames and Medway.  She is now based in Colchester where she has been well maintained as a houseboat and museum.

Built in 1952 by W.J. Yarwood & Sons Ltd of Northwich, Cheshire, FOUNTAIN was a 75ft (80 L.O.) riveted steel hull bunkering vessel with unique riveted bow design fitted with a 121hp Lister Blackstone diesel for C. Crawley Ltd of Gravesend.  Built as their flagship, FOUNTAIN was a modern version of the Thames sail barges which a her 3cyl diesel engine which made her reliable and gave her a speed of around 7 knots. From the design of her funnel set up and the sixze of her engine room it would appear she was originally envisioned to carry a steam engine. However during her build, innovations from Blackstone meant that she received the very first of their new marine diesel engines putting her at the very front of a new age of power for Thames Barges.

Working out of C.Crawley's West Pier at Gravesend, FOUNTAIN supplied Fresh Water services to vessels on both the River Thames and Medway.  Originally owned by Thomas John Metcalf and Ellen Sarah Metcalf, neé Crawley she was used as a fountain ship in ceremonial water processions on the River Thames, spraying water high up over its sides.The majority of C. Crawley's fleet were converted tanker ships but FOUNTAIN was purpose built as the fleet's flagship

Providing bunkering services to ships on the River Thames brought her into contact with a huge variety of vessels including the HMY BRITANNIA for which she provided fresh water services during BRITANNIA'S visits to the Pool of London.

FOUNTAIN stayed in service until the late 1990's and, upon the dissolution of C. Crawley, was sold to private owners who lovingly maintained her and kept her wheelhouse and engine room in original condition.

Currently being restored as a museum ship, FOUNTAIN is also home to considerable specialist archives focussing on W.J. Yarwood and Sons Ltd, C Crawley Ltd (including fleet lists), as well as an extensive History of the Working Thames River.

Historic Museum Ship MB Fountain is supported by Friends of Fountain, an active and friendly group of supporters who carry out a wide range of tasks from maintenance and crewing to research. If you would like to get involved please visit the website: www.mbfountain.com/friends-of-fountain 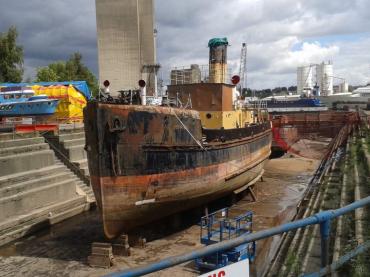