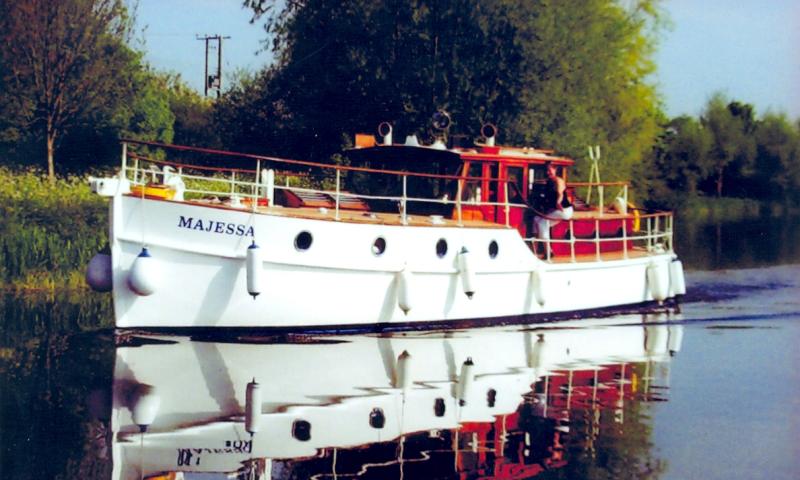 MAJESSA  is a leisure craft of timber construction built in 1939 by Staniland & Co of Thorne. She has twin BMC diesel engines.

MAJESSA is one of only two of the 38ft 6ins size Gentleman's Motor-Yachts of a series designed by Arthur Comben during the 1930s to a traditional break-deck style, having a sunken central wheelhouse and owner's stateroom aft.

MAJESSA,, yard number 199, was first commissioned in 1939, but not completed and launched in Thorne until 1947. In April 1949 she was the subject of a dedicated article in the North Sea Yachtsman Magazine.

MAJESSA'S first registered owner in 1947 was William Spowage of Woolaton Vale. John Aharlow of Worksop became her second owner in 1954, followed three years later by Godfrey Holmes Ltd. of Lincoln and a few months later by William Fieldsend of Sheffield. In 1960 Harry Harrop of Rotherham acquired the vessel and kept her on the River Ouse. Stanley Quintell of Bradford became the next registered owner in 1968 followed by Paul Moore (RN) of Beverley in 1986. He transported MAJESSA out to Gibraltar where the next owner was Anthony Gordon in 1987. Back on the River Thames in 1989 Colin Kidd bought MAJESSAfollowed shortly after by David Clarke of Romsley who moved the vessel on to the River Avon at Tewkesbury. In the ownership of David Cadman in 1992 MAJESSA spent a few years on Lake Windermere before being restored on the South Coast. She once more returned to familiar waters on the non tidal River Severn and Avon at Pershore in 2005 in the present ownership.