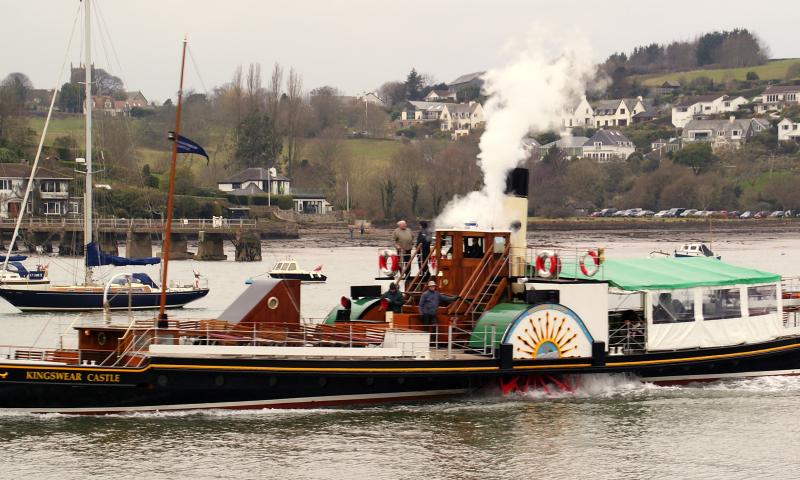 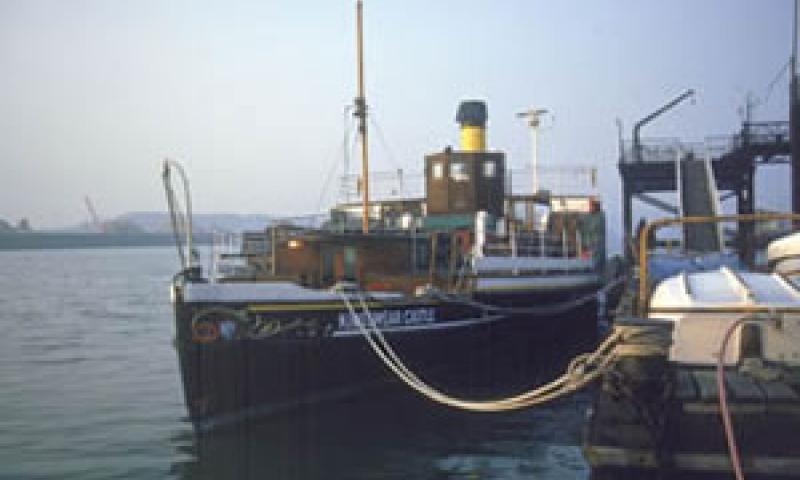 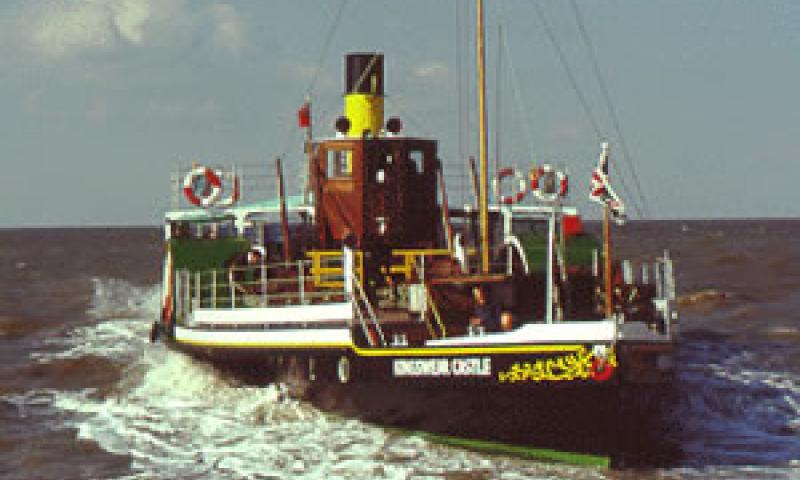 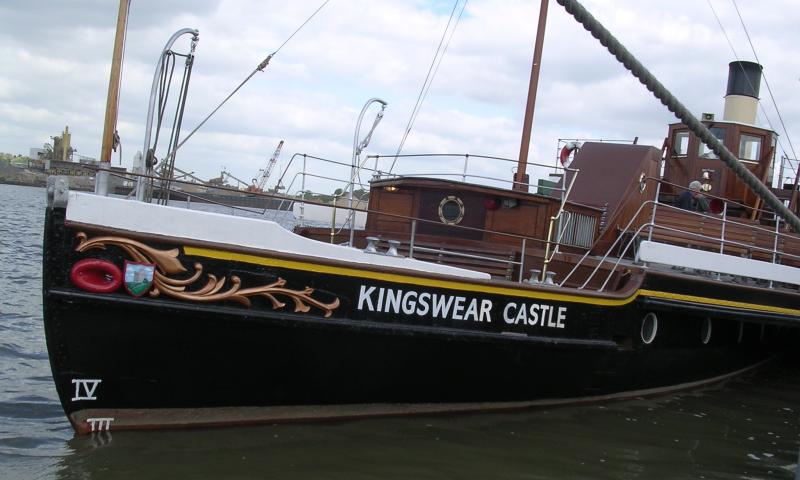 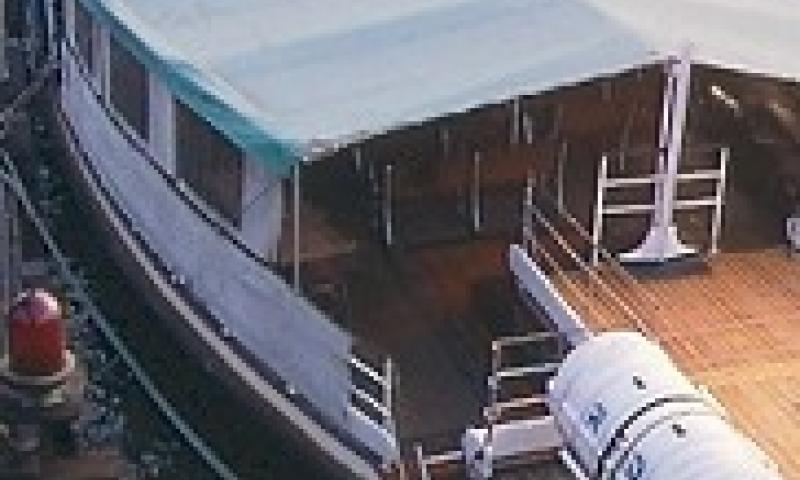 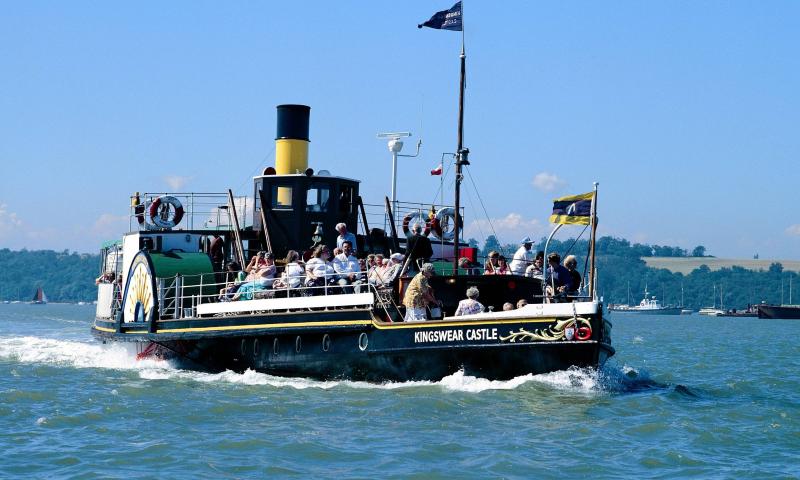 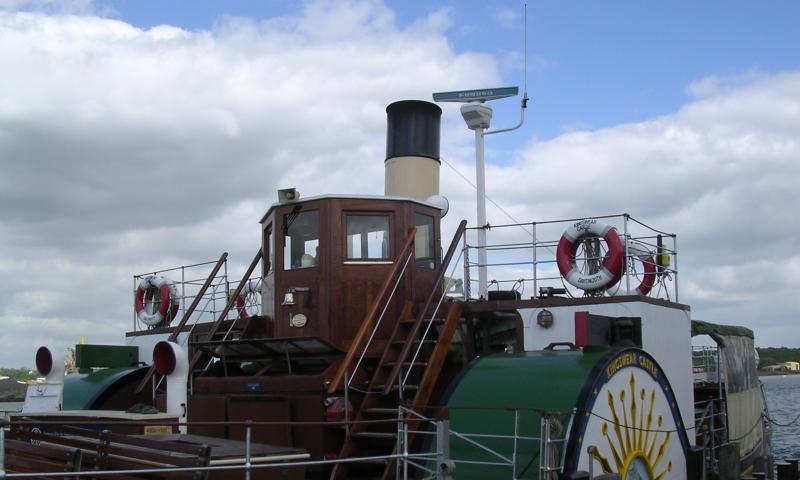 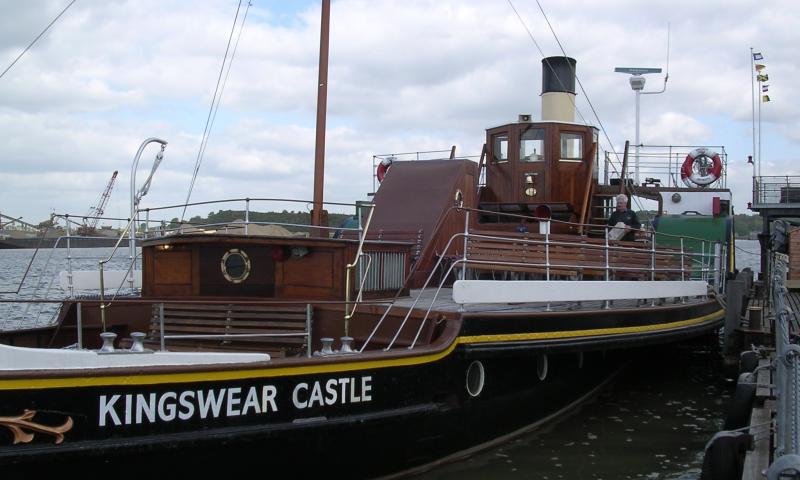 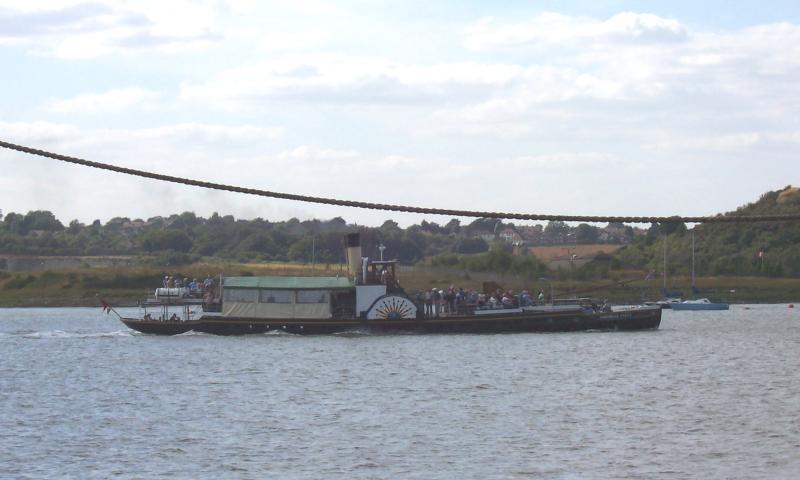 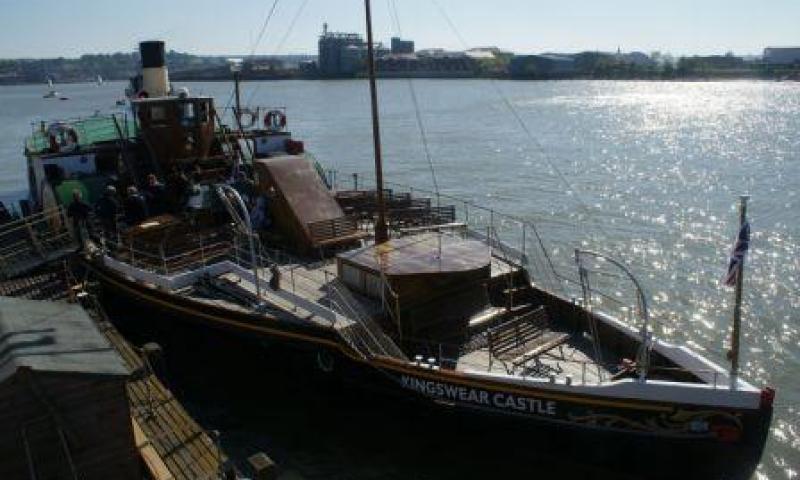 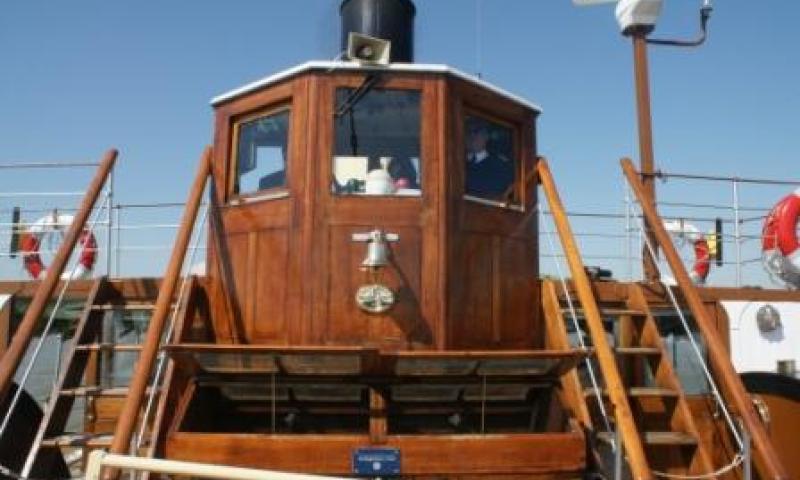 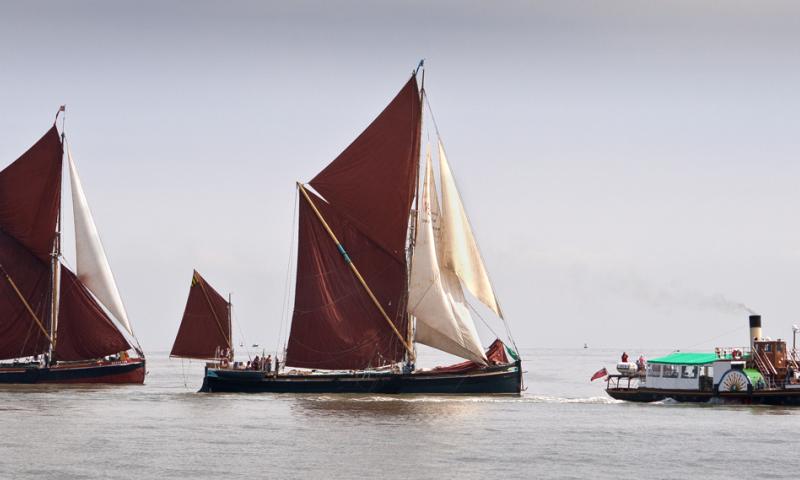 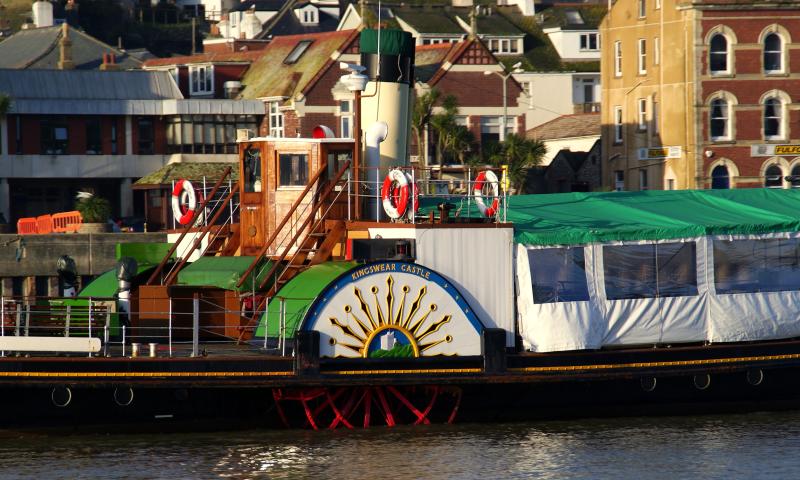 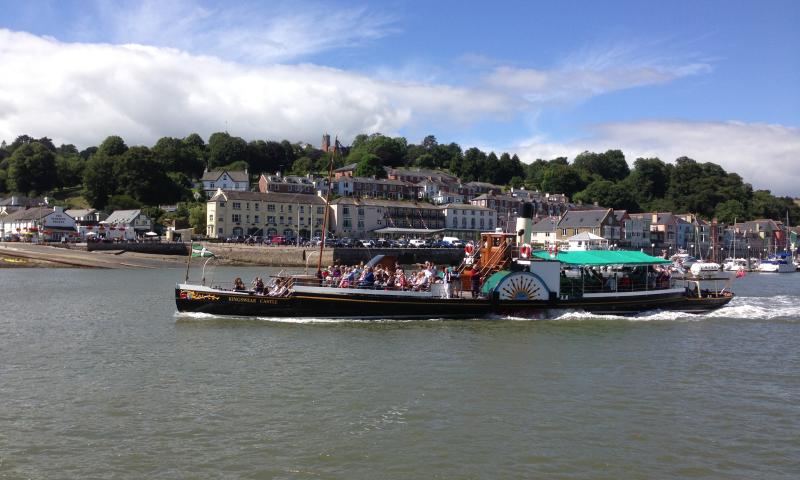 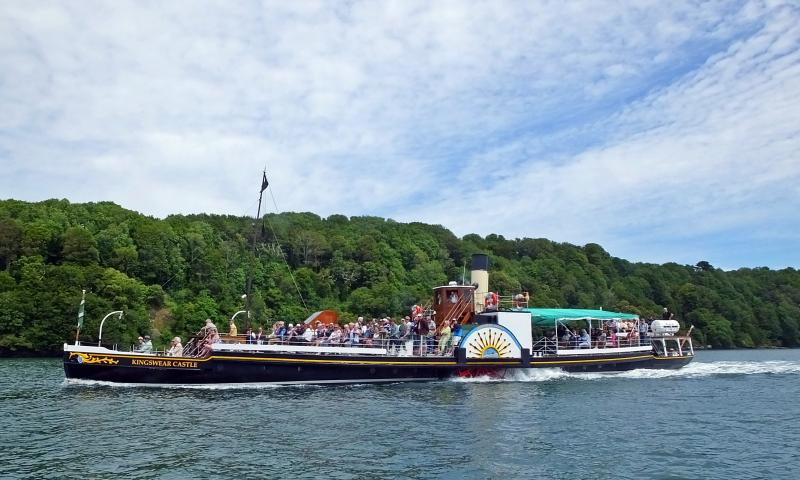 Kingswear Castle is the only complete, intact and operational example of a paddle steamer type once common on rivers in the West Country including at Plymouth and Dartmouth from the middle of the nineteenth century up to the mid-1960s.  Originally designed as transport links between points along the rivers these paddle steamers grew in size as the decades wore on and took an increasing role in the tourist industry as that developed from the 1870s.

Dating from 1924, Kingswear Castle is the last of these paddle steamers to have been built on the Dart by Philip & Son of Dartmouth in 1924 and, along with her two almost identical sisters Totnes Castle and Compton Castle, represents the final development of the design of these steamers.  The design of her riveted steel hull included greatly expanded deck space for accommodating ever more passenger numbers with sponsons extending almost the entire length of the ship both sides and an extra raised deck aft, all intended to provide extra passenger capacity within the ship’s length overall of 112ft, the maximum size for turning at Totnes.

Her coal-fired engine, built by Cox & Co., Falmouth, was transferred from an earlier Kingswear Castle and, like that ship, dated from 1904.  Kingswear Castle was completed with an enclosed wheelhouse and was later fitted with flying bridges that doubled as landing bridges to improve boarding facilities at low water.  There was also a slightly raised coach deck running along the centre of the afterdeck above the after saloon.  The fore saloon was equipped with a small catering bar.

Over the years there has been conservation work undertaken involving replacing all the decks and the underwater steelwork to maintain her in operational condition, plus a small alteration to the access to the forward saloon, which were all needed in order for her to be able to comply with MCA requirements.  This work has been undertaken largely on a like-for-like basis. She has been fitted with the latest navigational kit, but essentially remains as built in terms of hull, structure, accommodation, machinery, fixtures and fittings.

In spring 2001, she received a new coal-fired boiler, built by Wellman Robey of Oldbury, to a traditional design similar to its predecessor, which dated from 1961 and, in turn, was based on the ship’s original boiler dating from 1924.  She is also now fitted with a bow thrust to assist her turning at Totnes; paddle steamers have a very large turning circle relative to the size of the ship.  In Kingswear Castle’s case, this is about 1 cable wide, which just allows her to turn in one on the river off Dartmouth.

After spending nearly thirty years post conservation running on the Rivers Medway and Thames from 1985 to 2012, Kingswear Castle was returned in 2013 to run once again on the routes for which she was built at Dartmouth.  She therefore has a strong local following and is considered a Dartmouth ship. She is also known nationally and internationally as being a rare example of an operational paddle steamer and attracts visitors from all over the world with a particularly strong following in Switzerland.  She also took on an international role during the Second World War when, having initially been used by the Admiralty as a stores depot, she was then chartered by the United States Navy as a liberty ship, carrying personnel and stores at Dartmouth, still in her peacetime livery.

Over the years she has won various awards including from the Transport Trust, Scania, the Institute of Mechanical Engineers and she was Regional Flagship for the South West for NHS-UK in 2019.  Since 1985 she has made numerous appearances on television including, to name but a few, Songs of Praise, Number 73, Mr Majeika, Escape to the Country, Countryfile and TV adaptations of Dickens’ Our Mutual Friend and Great Expectations. She has appeared on the big screen in Around the World in 80 Days starring Pierce Brosnan and Eric Idle.

Kingswear Castle was added to the National Register of Historic Vessels in XXXX and given the status of being in the National Historic Fleet.  Her two sister ships still exist, although Totnes Castle is on the bottom on the sea in Bigbury Bay where she sank in 1967 and the hull of Compton Castle is in poor condition in Truro. Her steam engine was acquired by the Paddle Steamer Kingswear Castle Trust Ltd and is currently in storage.  Kingswear Castle is now the only operational coal fired paddle steamer in the UK.

The Trust owns an archive about the vessel from her earlier days on the Dart including correspondence files, some logs and ledgers and a near complete set of plans including General Arrangement, Scantlings, Shell Expansion. Lines Drawings and various boiler and machinery plans. The archive also includes, amongst many other things, all this ships’ logs and passenger returns from 1985 to 2012.

Kingwear Castle was designed as a river paddle steamer to run up and down the River Dart between Dartmouth and Totnes. As the latter dries out at low tide, she was built to have a very shallow draft of little more than 1m to maximise the tidal window in which she could access Totnes.  Accordingly, she was lightly constructed to keep her weight down with the hull plating a combination of 6mm and 8mm strakes and was built with light scantlings.  As such a lightly constructed hull may work whilst in operation and as the paddle wheels hang off the paddle shaft, like other paddle steamers, Kingswear Castle is fitted with flexible couplings.  Within the engine’s crankshaft, the connecting rods are attached to the webs on one side by a large nut and on the other by a flexible coupling involving wedge shaped brass inclusions.  These are designed to take up stresses and strains in the machinery.  The River Dart is very sheltered, so she was built with a comparatively low freeboard, which also helped to keep her weight down, making her unsuitable for any sea-going work.

As built, Kingswear Castle was licenced by the Board of Trade to carry over 500 passengers which is a massive payload for a ship just 112ft long and her expanded deck space was created to maximise capacity.  Today she sails with Maritime & Coastguard Agency Passenger Certificates for 235 back home on the service for which she was built on the River Dart between Dartmouth and Totnes.  In her heyday she and her two sisters could put afloat 1,500 passengers at any one time many of whom made the connection from Paignton to Kingswear by steam train, then up river by paddle steamer with return by bus or the other way round.

Kingswear Castle remains operational in the same heritage setting where she was built and worked.  From late May to the end of September, passengers can still make the circular trip in conjunction with the Dartmouth Steam Railway and have the same experience as those travelling on her when she was built. It is possible to watch the steam engine working from the viewing gallery on deck, the engineer shovelling coal into the boiler and see how deftly the captain berths and moors the ship in traditional paddle steamer style.  Kingswear Castle remains an aesthetically attractive vessel whose sleek lines were built to give pleasure to both those on board and those observing from the shore.

During the Second World War, KINGSWEAR CASTLE was initially used by the Admiralty as a stores depot in Dittisham. In 1941, she was chartered by the United States Navy as a liberty ship, carrying personnel and stores at Dartmouth, still in her peactime livery. She returned to her peactime duties in 1945, and in the winter of 1961/62, a new boiler was fitted. She became the last paddle steamer on the Dart and the 1965 season was to be her last, at the end of which she was laid up in Old Mill Creek.

In the spring of 1967, she was bought by the Paddle Steamer Preservation Society (PSPS) for £600 and in August of that year was towed to the River Medina, Isle of Wight, for charter to Riddetts. This charter was intended to be a stopgap until the society raised enough funds for conservation of the ship. However, in the spring of 1970, KINGSWEAR CASTLE was moved from her river mooring to a mud berth and became subject to vandalism and her condition deteriorated. PSPS terminated the charter, and in June 1971, she was towed to the Medway.

A restoration project gathered momentum, and by November 1983, she was able to steam again on trials. For the 1984 season, she did not have a full DTI certificate and could only take twelve passengers on her sailings from Strood Pier. After further work, a certificate for 250 passengers was issued in May 1985 and she started a programme of sailings from the Thunderbolt Pier, in Chatham Historic Dockyard. A plan to return the ship to the River Dart was dropped, and KINGSWEAR CASTLE has remained in service carrying passengers on afternoon, evening and charter cruises on the Medway and Thames.

Further rennovation has since involved replacing all the decks and the underwater steelwork, and in spring 2001, she received a new coal-fired boiler, built by Wellman Robey of Oldbury, near Birmingham, to a traditional design similar to its predecessor.

Update, January 2022: Phase 1 has begun of a major rebuild of KINGSWEAR CASTLE, which should be completed in time for her centenary in 2024. 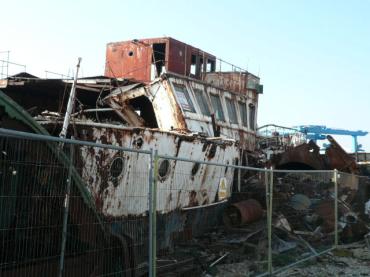 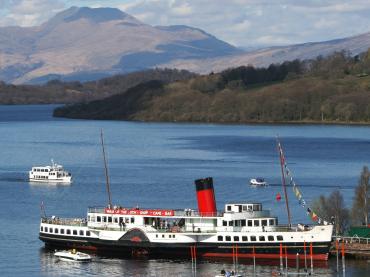 Maid of the Loch 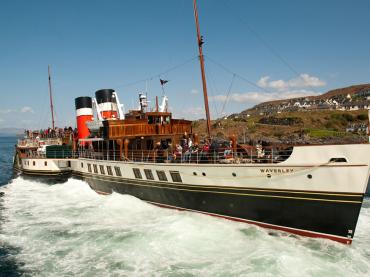 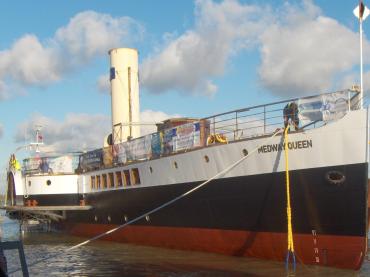