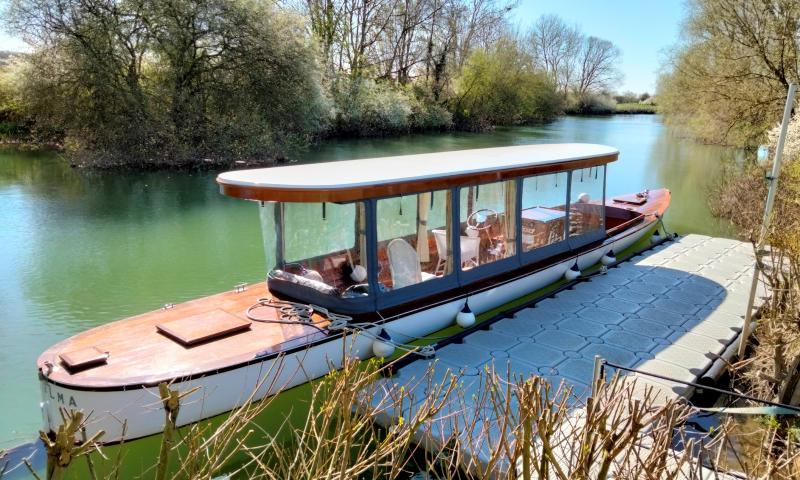 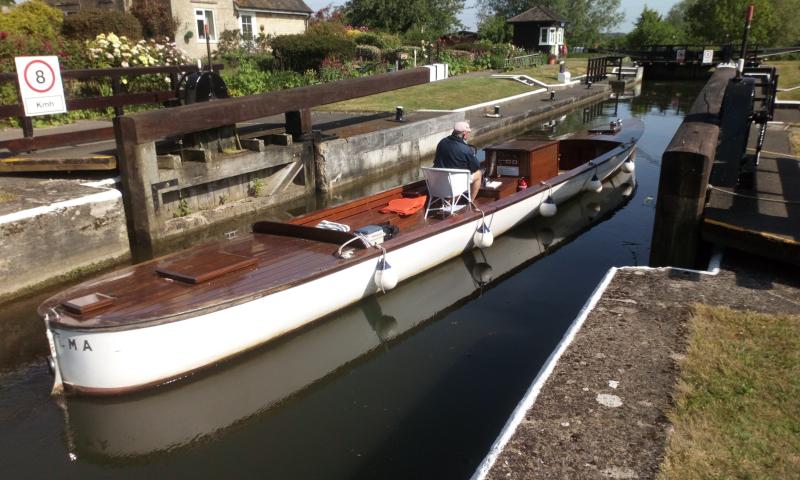 EMPRESS ELECTRA was built by Sam Saunders at Springfield Works, Goring-on-Thames in 1901.  She is 40 ft long and 6 ft in the beam with a tunnel stern to reduce wash at speed.  She was built with electric propulsion (thought to be an Immisch DC motor and glass battery cells).  Her lightweight hull was constructed using the patented Consuta plywood construction technique.  Consuta plywood is made from four diagonally planked, mahogany wood veneers; three of 1/8" thickness, with an outer layer of 3/16". These diagonal planks are stitched together with 16-gauge copper wire. The copper is a continuous stitch, about 1½" long, looping in and out of the hull. The veneers are interleaved with calico (canvas soaked in linseed oil) to provide a watertight skin, as no waterproof glues existed at the time.  When constructed she had a lightweight canvas sun canopy.

The original owner is not known.

In common with many electric and steam launches of the time, by the late 1920s, she had been fitted with a petrol engine, believed to be of French manufacture.  Later, the prototype Austin Princess marine engine was installed.

By the 1950s she was owned by Edwin Phelps Boatbuilders at Putney and had been renamed THELMA (thought to be after the owner’s daughter).  The boat was rented out to regattas and rowing clubs for umpiring and coaching duties.

In 1958 THELMA was sold to Thames Rowing Club, Putney.  It was used regularly as the Club’s main coaching launch, with occasional duties as an umpire’s launch at tideway and up-river regattas and as a following launch for such events as the Universities’ Boat Race.

In 1972, after a grounding, THELMA sank at her mooring outside Thames Rowing Club.  She was not seriously damaged structurally, but her Austin Princess engine did sustain major water damage.  She sat on trestles outside the clubhouse for many years, as club members tried in vain to repair the engine.  As a prototype, spare parts were virtually unobtainable.

In 1974, Alan Hawes, a former captain of the club, bought the boat and continued to restore her until his death.  Subsequently, Alan’s family took over the boat’s maintenance.  In 2012 she was fitted with a new 3-litre Mercruiser engine at Mark Edwards’ Richmond Bridge Boathouse.  In 2016 she underwent major restoration at Michael Dennett’s boatyard at Laleham.

With his wife, Janet, Terry Kirkpatrick, another member of Thames Rowing Club, bought the boat from the Hawes family in 2019.  In 2020, Jock Birney joined the Kirkpatricks as a co-owner and the boat went back to Dennett’s yard to have coamings and a removable wooden canopy fitted.

In 2022, the boat had a 72V, 40KW Netgain Hyper9 motor fitted by Electrogenic Ltd and Oxford Cruisers, at Oxford Cruisers’ boatyard on the Thames at Eynsham.  In honour of her return to electric propulsion, she was renamed “EMPRESS ELECTRA”. 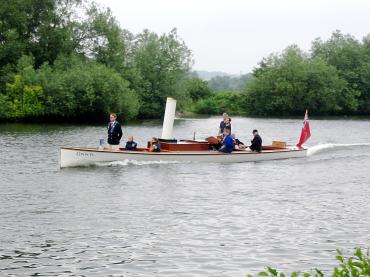