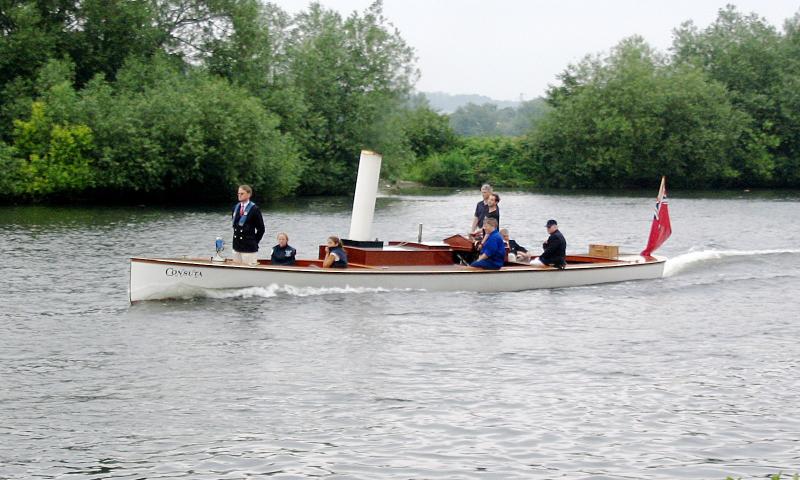 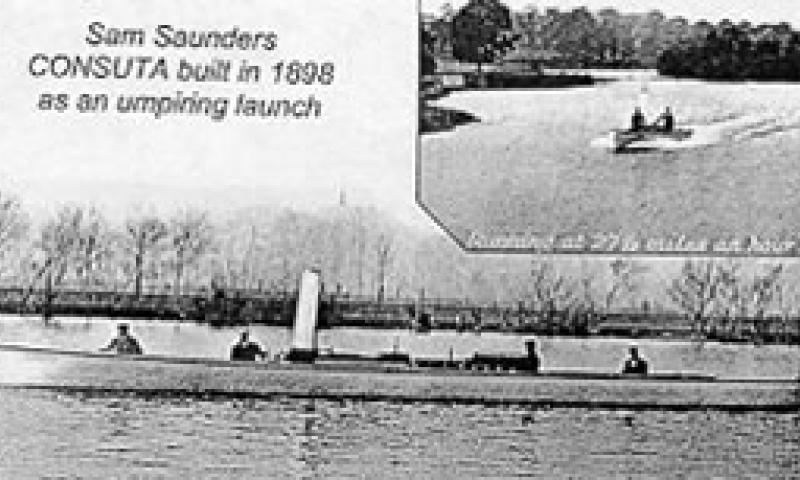 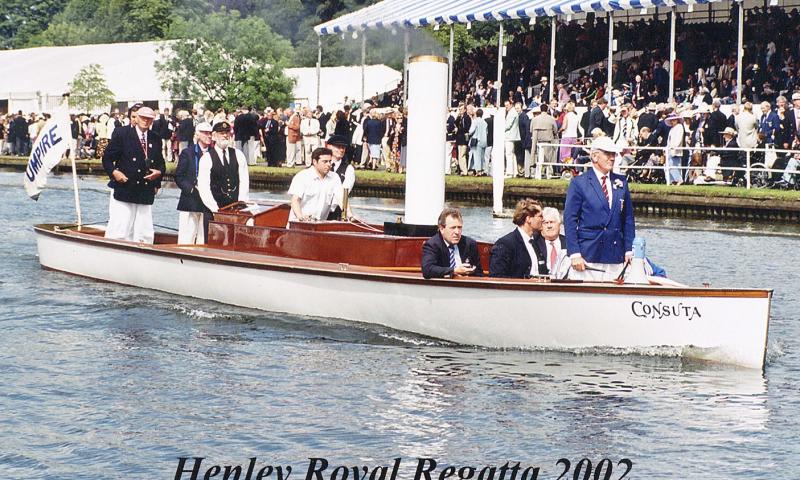 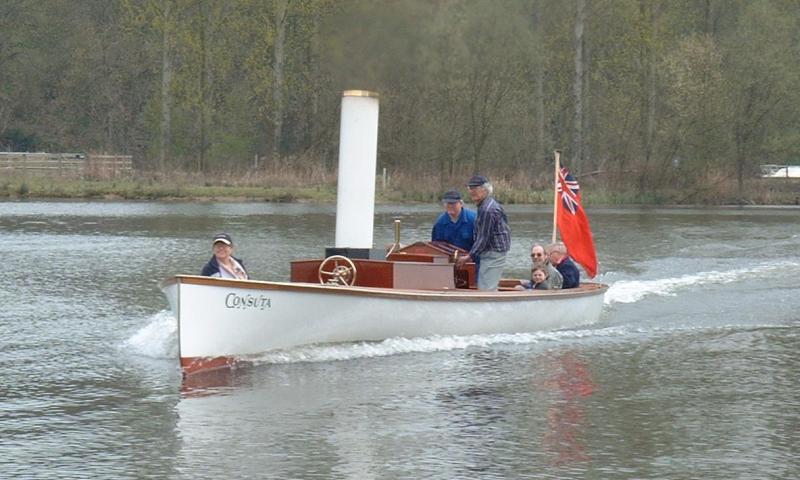 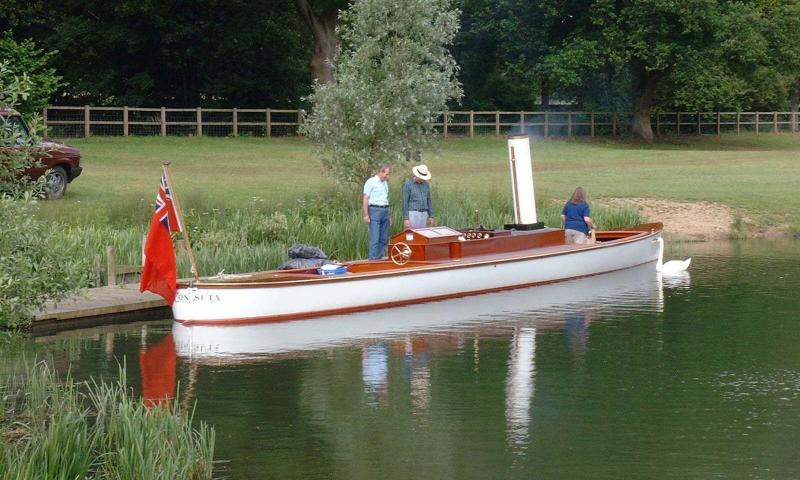 CONSUTA’s physical significance can be found in her name which means ‘stitched together’ and derives from the revolutionary technique used in constructing her lightweight hull. In the absence of waterproof glues, four veneers of mahogany planking were hand sewn together with copper wire stitches, laid in approximately 40,000 inch long grooves in the outer lamination. This became known as the ‘Consuta Method’ and was patented by the builder, remaining in wide use until the 1950s and becoming the forerunner of later cold moulded plywood hulls. CONSUTA has no ribs and her small frames are only used to spread the load of the steam machinery, giving her an extremely light, but strong hull. CONSUTA’s original steam engine was built by G.F.G Des Vignes and was capable of producing 100 hp. This was replaced by a petrol engine in 1923, but the original steam plant was reinstated during conservation work in the late 1990s.

Contemporary reports compiled from club minutes and letters indicate that the vessel was hired as the Henley Royal Regatta umpire launch for a number of years and seen as very ‘satisfactory’ with ‘far less roll caused by her than any other boat hitherto used’. She carried the Prince of Wales in 1912 and later acted as umpire launch for the annual Oxford and Cambridge boat race on the Thames, being used for the first ever live TV broadcast of this iconic event in 1949. Today, CONSUTA continues to be presented at Thames regattas and festivals where she has been used once more as an umpire’s launch.

CONSUTA was commissioned to be driven at high speeds of up to 23 knots whilst producing minimal wash. Her lines were drawn to achieve this and she was the first vessel to be built with a tunnel stern, which is still adopted by GRP-constructed umpire launches today. CONSUTA’s ability to travel at speed is integral to her significance. The decision to return her to operational use through conservation has meant some loss of original material, but allows her to demonstrate her original purpose as she is seen steaming along her home river, the Thames. This heritage setting adds to her significance as a surviving representative of the growth in sporting and leisure boating on the Thames at the end of the 19th Century.

CONSUTA is a fast steam launch with a lightweight hull made by a revolutionary construction technique of four veneers of mahogany planking stitched together with copper wire. This technique was patented by Sam Saunders and called 'Consuta Plywood'. Saunders used this strong waterproof plywood for boat and airplane construction in the early 1900s and it remained in use until the 1950s by which time waterproof glues had become widely available.

The name CONSUTA was derived from the Latin 'consutilis' meaning stitched. The steam engine used in CONSUTA was built by G.F.G. DesVignes and can produce 100 horsepower. CONSUTA achieved 27½ mph and was one of the fastest launches on the Thames at the time. She was successfully used for coaching duties as an umpire launch at various Thames regattas and also for several years was the Umpire Launch for the Oxford and Cambridge boat race. There are several photos also showing royalty of the 1900s carried as passengers.

In 1923 the steam plant was removed by Taylor Bates at Chertsey and replaced with a Wolesley petrol engine. Subsequently she was sold to Phelps at Putney and then Sims at Richmond who had the contract for umpiring the boat race.

In 1949, the BBC used CONSUTA as a TV camera platform providing live television coverage of the Oxford-Cambridge boat race. This was the very first outside broadcast to use radio link for the TV pictures. She continued this duty until the late 1960s. By 1971 she was owned by F&B boats at Surbiton and was used for tripping.

In 1973, G.E. Lindsay purchased CONSUTA and decided to restore her using the original steam engine found at Tom Taylor's yard, Staines in 1975. The Consuta Trust was formed in 1998 to complete the restoration work. Since Trust ownership, funds have been raised in various ways including a Heritage Lottery Fund grant. The final restoration work was carried out by Henwood and Dean, Kew Bridges Engines and with the help of a great deal of volunteer work hours. CONSUTA was re-commissioned in October 2001 as originally built.

Since her restoration, CONSUTA is publicly displayed at various Thames regattas throughout the summer each year. She has also worked as an umpire launch at rowing regattas, fulfilling the task she was designed for over 100 years ago. 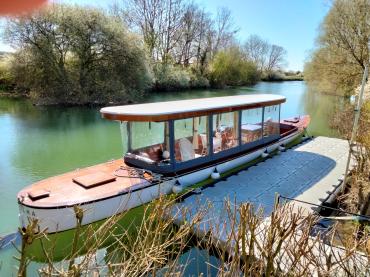