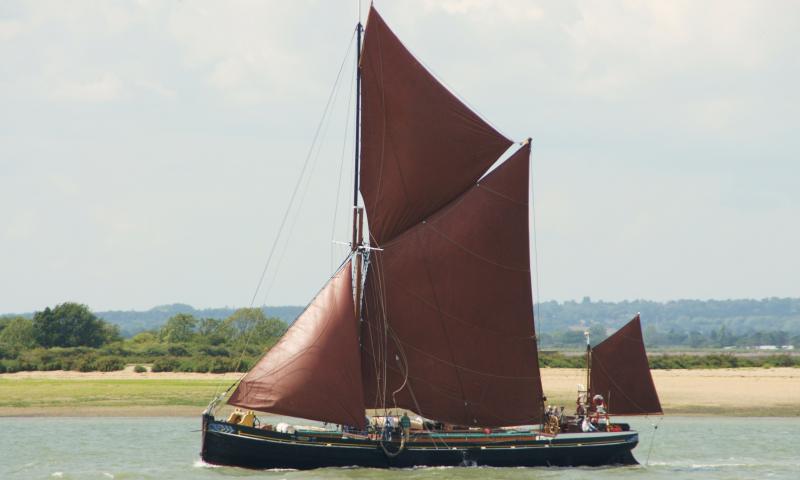 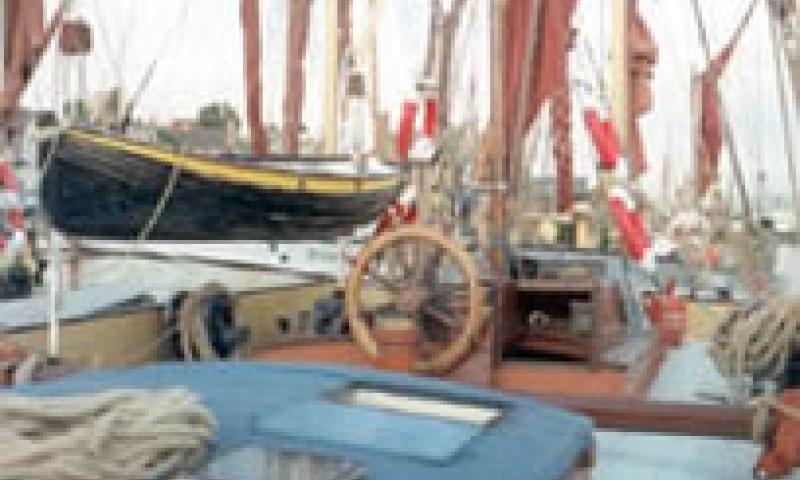 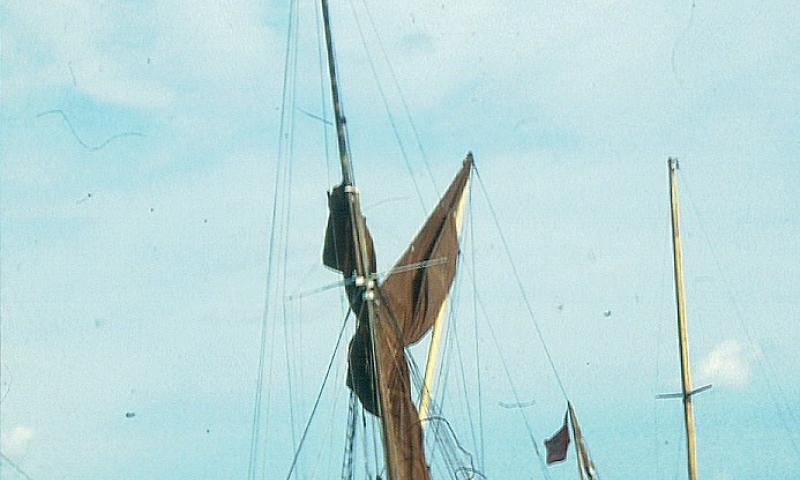 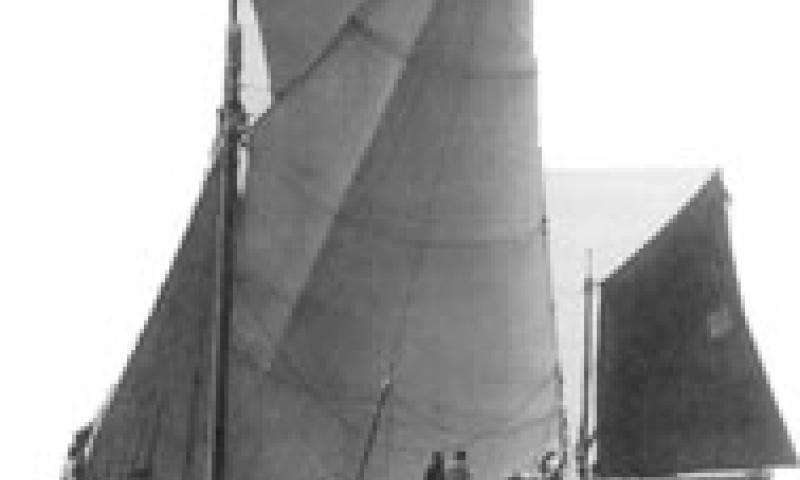 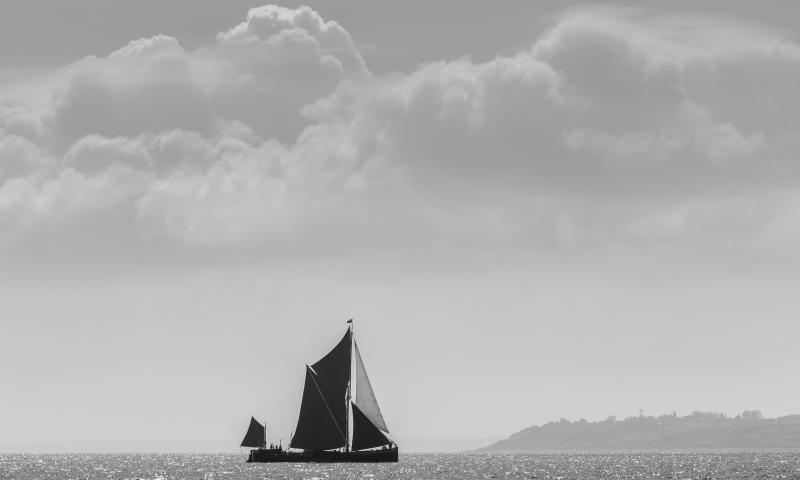 CENTAUR was built as a wooden coasting barge and underwent considerable reconstruction work in the years between 1977 and 1995.  This resulted in the loss of original material as a consequence of re-planking the topsides, and the installation of a new deck, new inner and outer whales, a new chine keelson, new knees, and a new transom and stern post.  The keelson is now steel and most of the frames have also been replaced.  However, there are a number of original features including the beams under the mast area and over the engine room which are in original mild steel, and two traditional varnished mahogany skylights, one over the main hold and one over the aft accommodation.

CENTAUR is now fitted with an inboard diesel engine and has a new steel mast and sprit, although her sail configuration has been replaced to mirror the small rig of her trading days. Natural fibres have been used for the ropes, and the rigging has dead-eyes on the lower ends, although wire lanyards have been used rather than rope.  The traditional hand geared windlass unit remains and the original skipper’s cabin has been preserved in its original form. Further conservation in 2014 restored the wooden planking on her bottom to its original thickness. All the bolts from the keelson and two chine keelsons were removed, as were many of the interior fittings.

CENTAUR was constructed in 1895 and is one of the surviving barges from the well-regarded barge builders John and Herbert Cann, being launched at their Bathside yard, Gashouse Creek, Harwich. She took part in the traditional barge races from build.  During her service in the coastal trade, she visited ports of France, Belgium and the Netherlands giving her a European significance. She continued trading throughout the First World War and is credited with bringing home a coastal motor boat on her deck following an incident at sea.  In 1940, she joined ships at Dover preparing to assist in the Dunkirk evacuation, but didn’t make the crossing due to damage necessitating repairs.  From 1933, she joined the Colchester fleet of Francis and Gilders Ltd, which merged with the London and Rochester Trading Company in 1951.  Her registration was closed in 1955 and she became an unrigged timber lighter.  Under the ownership of the Thames Barge Sailing Trust, she has continued to race regularly. Her history and archival documents are held by the Essex Record Office.

Built to carry cargo between the East Coast and the continent, CENTAUR is larger than most river barges and has a more seaworthy hull.  She has a graceful sheer and a shapely transom, with small, low hatches and a wide deck for safety at sea.  As with all barges, she is a flat bottomed craft, designed to sit on the river bed at low water.  She continues to operate on the East Coast in her original heritage setting, and with the same rig as in her cargo-carrying days.

CENTAUR was launched by John and Herbert Cann on 15 February 1895 at their Bathside yard in Gashouse Creek, Harwich, for Charles Stone of Mistley who, with his wife, held 56 of the 64 ownership shares in the vessel. The area was in the grip of one of the coldest winters on record and the 'Hariwch & Dovercourt Newsman' reported that ‘owing to the severe weather the usual trial trip was disposed with’, noting that conditions were ‘of Arctic severity’ with as much as ‘25 to 30 degrees of frost’ in the previous week. At this time Cann’s yard was turning out one or two sailing barges each year: Kitty, which was also completed in 1895, is amongst a clutch of their barges which have survived.

CENTAUR, built of wood, was a coasting barge – able to trade all around the British coast and to the near continent. This meant she was larger than the river barges and had a more seaworthy hull form – the generous sheer and shapely transom contributed to her handsome appearance. James Stone, then aged 41, was her master. For crew he enlisted W. Smith, aged 37, as mate and James Smith, aged 18, as boy. Initially the barge traded to Calais from London, Portsmouth and Southampton. She also entered barge races - winning the 1898 Harwich race, in which five barges participated, and the 1899 Medway match.  In 1898-99 her trade took CENTAUR to Dunkirk, Calais, Antwerp, Ostend, Alderney, Bruges and the Netherlands, from a variety of home ports including Dover, Rochester, London, Lowestoft, Goole, Shoreham, Southampton and Newport. In August 1899, during a passage from Mistley to Hull to load wheat she lost a leeboard and her bowsprit off Sheringham and was towed into Great Yarmouth for repairs. In April 1902 CENTAUR's steering gear was totally disabled after sailing from Shoreham for Burght in Belgium with a cargo of spirits of salts, and she had to be towed into Newhaven.

In 1903 George Langley became the managing owner, with his partner William Rogers in command of the barge, which continued in the cross-Channel trade. Accidents at sea were not unusual for coasting barges. CENTAURwas towed into Portland in January 1905 with a broken sprit and other damage when bound for Exeter from London with sugar. In December 1906 she lost both anchors off Terneuzen, in the Netherlands, and had to put back. In the same year William Rogers became the managing owner. However cargoes became more difficult to find and in August 1911 Rogers sold CENTAUR to Edward Hibbs of Brightlingsea to work for the oil mills at Colchester. She traded between there and Millwall, taking linseed oil in drums to the London River and returning with raw linseed and cottonseed. Reportedly the oil mill barges were always very smartly turned out, and none more so than CENTAUR.

An incident during the First World War involving Centaur is related by Frank Carr in ‘Sailing Barges’. The barge was sailing in the Channel in a light air and thickish fog when the skipper heard the roar of a coastal motor boat’s engine nearby. A few moments later the sleek hull of the CMB – an early form of motor torpedo boat – travelling at speed shot out of the mist and, striking the barge amidships, leapt on deck and settled down on top of CENTAUR's main hatch. This came as quite a shock for both skippers but the barge made port without problem and unloaded her unusual cargo.

After the First World War a trade in coke and pitch to the near continent provided profitable business. Whilst the ownership of shares in the barges changed regularly one skipper, Ephrain “Chick” Cripps, was associated with her for over 20 years. His records for 1928 and 1930 show that all of the barge’s passages were between London and the Essex and Suffolk coasts, with Colchester still the principal port.

In October 1933 CENTAUR joined the Colchester fleet of Francis and Gilders Ltd and entered the grain trade between the London Docks and Ipswich, Yarmouth and Felixstowe. In May 1940 she went to Dover to join the ships preparing for the Dunkirk evacuation, but was damaged by a tug whilst berthed at Dover and began taking in water. She was unable to sail for Dunkirk and had to return to Maldon for repairs. CENTAUR resumed trade around the Thames and East Anglia for the rest of the war, and afterwards continued in the grain trade.  Francis and Gilders were left as the last ‘seeking’ fleet, finding cargoes wherever they could: these cargoes were secured either by the masters of the barges or by the company’s agents in the city. Once a year the barges went on the blocks for maintenance, either at the company’s own yard in Colchester or at Cook’s yard in Maldon.

In January 1952 CENTAUR was on passage from the Surrey Docks to Felixstowe with wheat when her steering gear broke and, in winds of force 6 – 7, the sea was breaking right across the hatches (which was not that difficult considering the low freeboard of a loaded barge). A tow was needed and distress rockets were fired. Before the Walton lifeboat could arrive Centaur was taken in tow by the sailing barge SAXON and taken into the Colne.

In March 1951 Francis and Gilders merged with the London and Rochester Trading Company Ltd  but their barges continued to fly their purple and gold bob. However the new owners were soon intent on selling the acquired barges. Amongst CENTAUR'slast cargoes in 1954 – 55 were timber to Colchester and Maldon, sugar beet from Ipswich to Silvertown, ballast from Fingringhoe to London, cement from Halling to London, and 40 gallon oil drums from Grain to London. The last four remaining Colchester barges still under sail – CENTAUR, GEORGE SMEED, KITTY and MIROSA- were sold to Brown and Son of Chelmsford, for use as unrigged timber lighters. In October 1955 CENTAUR's registration was closed since as a lighter she was no longer required to be registered. She joined a fleet of former sailing barges bringing timber from ships moored off Osea Island to the Heybridge Basin, where it was transhipped to canal lighters for transport to Chelmsford.

CENTAUR continued in this work for nine years before being sold in 1965 to Richard Duke who converted and re-rigged her for leisure charter work from Pin Mill and Maldon. A galley, saloon, toilet and four four-berth cabins were created in the hold, and the charters ranged along both the south and east coasts. She was also entered into barge races from 1965 onwards, with some success. In 1974 the barge was sold to the Thames Barge Sailing Club which offered crewing experience, cruises and charters to both members and non-members.  Initially she was based at Faversham, and later at Maldon. In the winters the club began a long and extensive phased restoration of the barge, which involved replacing most of the frames and planking and was not completed until 1995. In the winter of 1988/89 the Ruston auxiliary engine and gearbox, which had become unreliable, were replaced with a Bedford 500 six-cylinder diesel truck engine and a marine gearbox, together with a new propeller. This gave CENTAUR a speed under power of 9 knots, an improvement on her previous 3.5 knots.

CENTAUR continued to race regularly: in 1993 she won the Inter Match Trophy for the best overall performance in the four leading matches, the Medway, Blackwater, Pin Mill and Southend. She still works out of Maldon for the Thames Sailing Barge Trust (as the club has been renamed) with charters and cruises between May and October each year, taking up to 12 passengers. Her rig is typical of an Essex trading barge, rather than the bigger racing rig used by some restored barges.