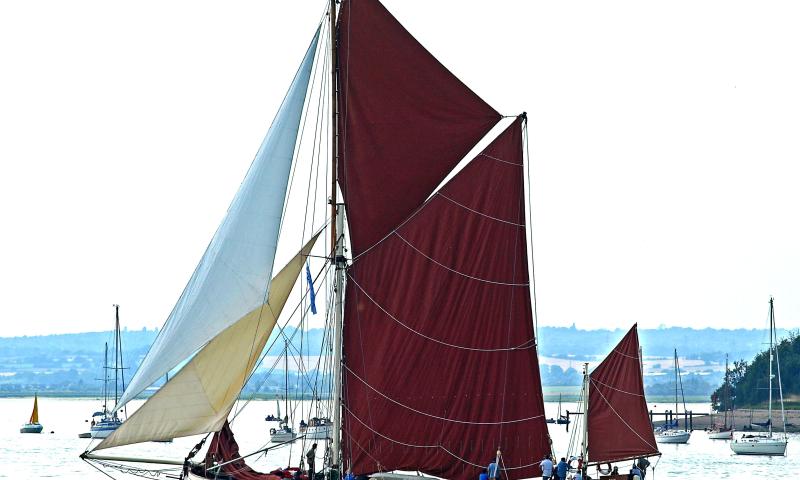 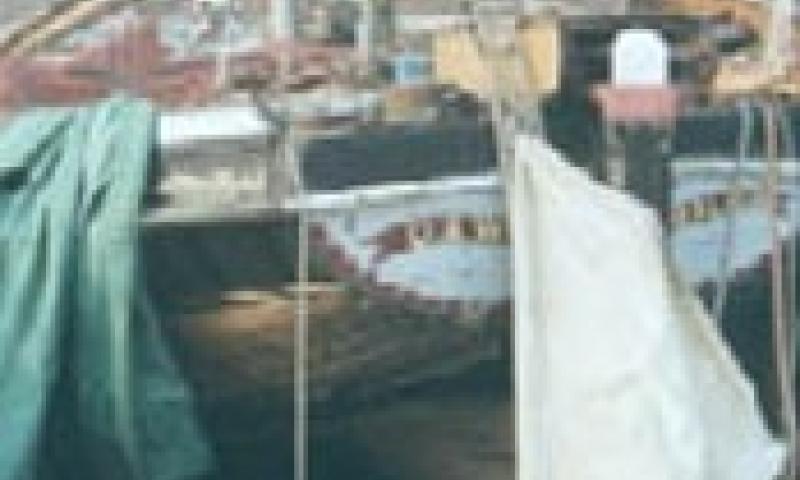 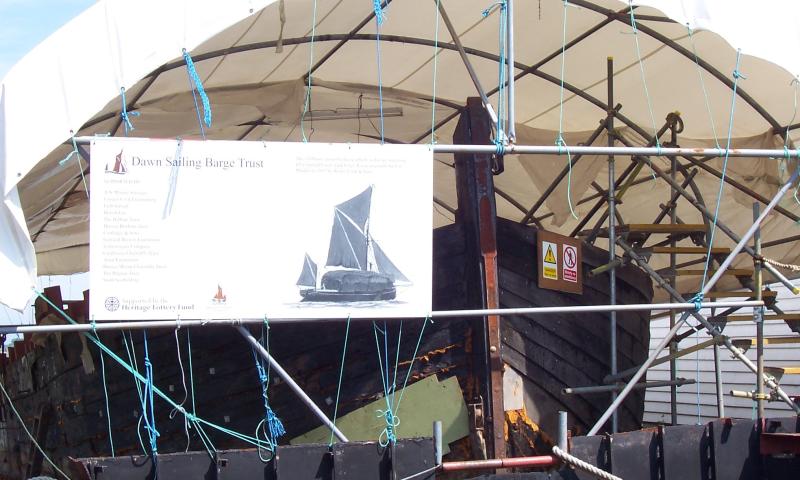 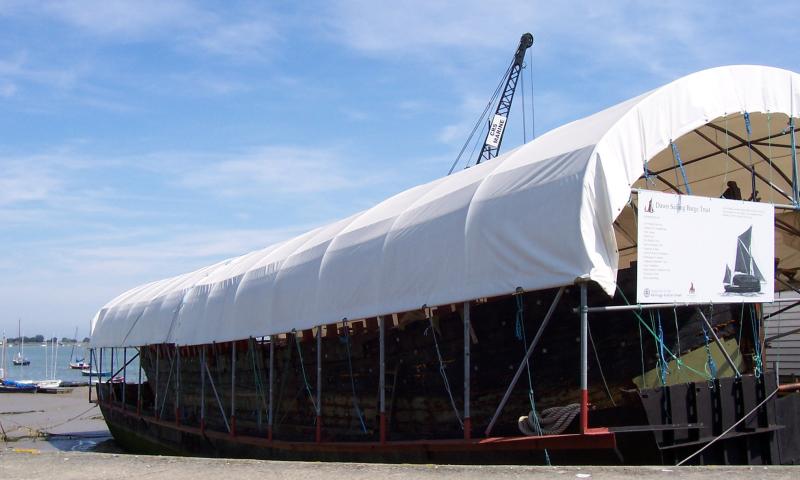 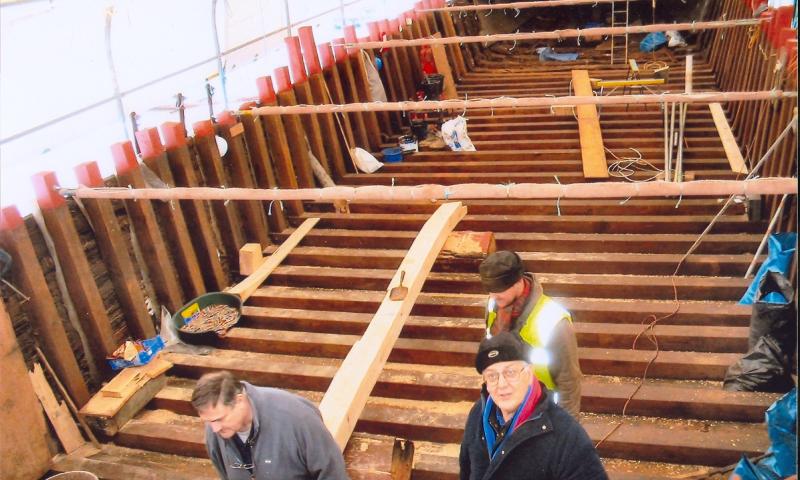 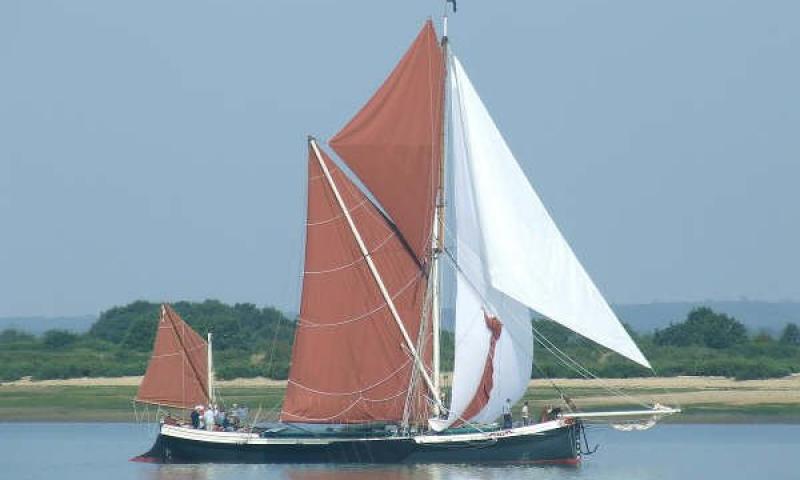 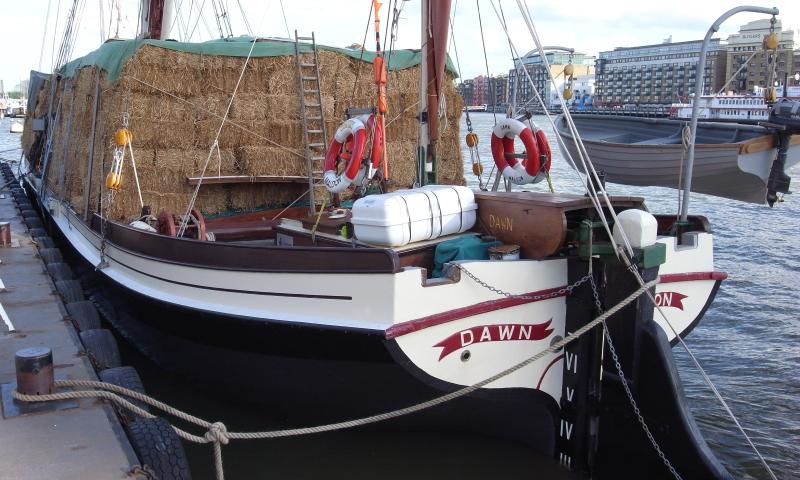 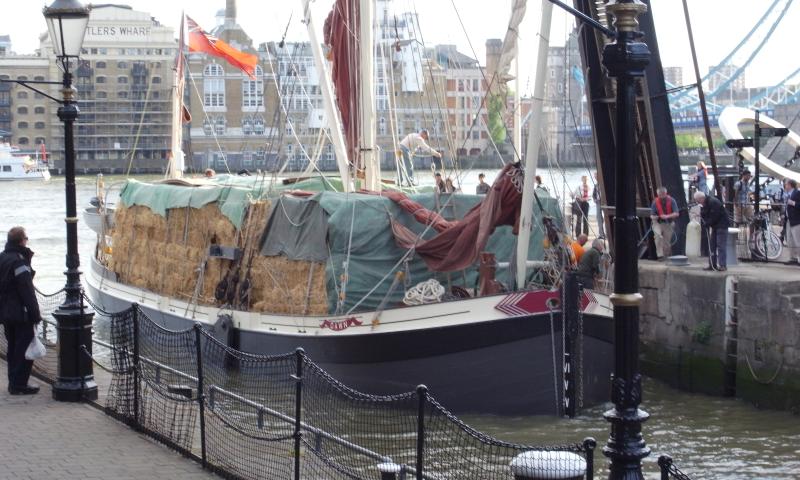 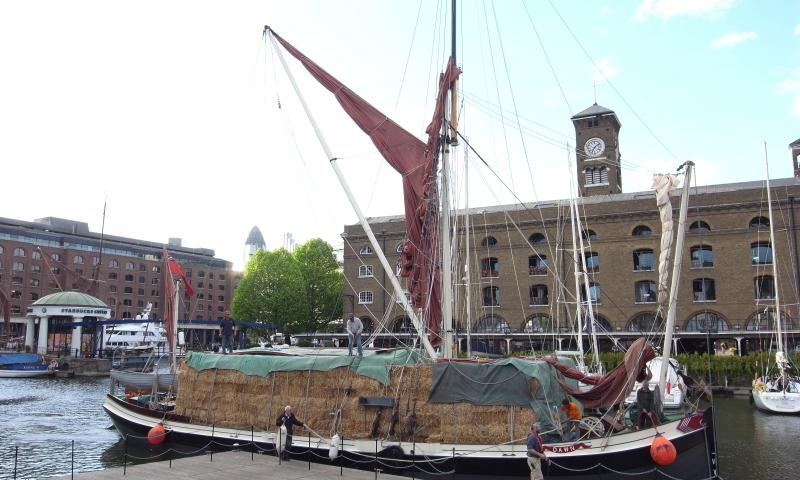 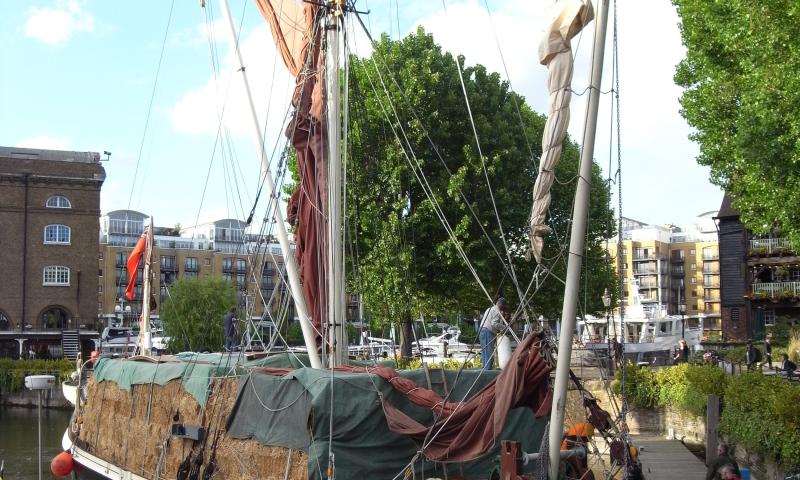 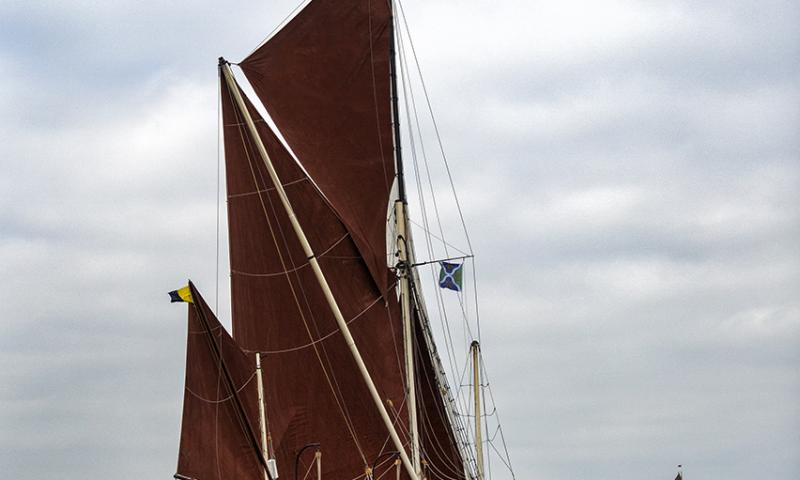 Laid down in 1895, DAWN was built of wood with iron deck beams and carlines, and launched in 1897 by Walter Cook at the North Wall Yard, Maldon, in Essex. The river wall was dug away to give her room when launched but she got stuck and was not launched until the following day. She was a stackie, designed with low sides and a wide beam to carry hay and straw, which because of its low density could be loaded high on the deck whilst the hold stowed mangel-wurzels. When the stack was loaded the helmsman could not see ahead, so the mate had to stand atop the stack and shout directions to the skipper. The mainsail was brailed up above the stack thus reducing its size.

DAWN was built for James Keeble, a Maldon hay and straw merchant and barge owner, and took the hay and straw to London for the city’s horses, returning with horses’ manure for the farms. She had bungs in her bottom and these were used to let water into the hold to scrub it out after carrying the horse muck. Her shallow draft allowed her to navigate the creeks on the East Anglian coast which served the farming communities.

DAWN was built with a tiller rather than a wheel and is thought to have been the last sailing barge to be so built, (the tiller was later replaced with a wheel). Her stackie career was possibly unique in that she never lost a stack overboard. Given her utilitarian design, with long chines rather than cutaway ends, she was surprisingly fast when light, and in 1924 won the Blackwater barge race in light airs, beating the shapelier Howard-built barges. In 1928 DAWN needed a major rebuild since the ammonia from the horse muck had caused major rot in the hold. To get a new keelson in, Cooks sank the barge and floated it into place through the bow. In 1933 she was sold to Francis and Gilder Ltd, of Colchester, taking grain and timber from ships to the mills and merchants of Maldon, Colchester and Ipswich. In 1940 she was requisitioned for war service and was reportedly loaded at Dover with supplies for Dunkirk, but following damage sustained in collision with an Admiralty tug had to return to Maldon for repairs. In 1951 Francis and Gilders merged with the London and Rochester Trading Company, and DAWN was fitted with a 44 hp Kelvin diesel engine. This was removed in 1959 when she was sold to Brown and Son, of Chelmsford, for use as an unrigged timber lighter – joining other former sailing barges working, such as CENTAUR, EDME and MIROSA, from the Heybridge Basin.

In 1965 she was purchased by Gordon Swift and re-rigged (using second-hand gear) to operate as a charter barge, based at Maldon, from 1967. She took passengers on bird-watching and photographic cruises on the Blackwater. Then in 1978 she was bought by the Passmore Edwards Museum, of the London Borough of Newham, to take children from the borough on educational and adventure outings, such as landing them on Osea Island for nature studies. Gordon Swift continued as her skipper and over 14 years thousands of schoolchildren sailed in her. In 1992 she was taken to Stargate Marina, in Hoo, Kent, for a major rebuild. However funds ran out before this could be completed and she languished in dock for six years, suffering through weather damage and vandalism.

In 1999 Gordon Swift formed the Dawn Sailing Barge Trust to save her. DAWN was no longer seaworthy and was had to be carried in the hold of a coaster back to Maldon.  The old coaster JOHNO was towed to Hoo and sunk in a creek.  DAWN was floated out of her dock at high tide and positioned over the sunken coaster.  As the tide fell she settled into the previously prepared blocks in JOHNO's hold.  Then the holes that had been cut in the side of the coaster were welded up and the JOHNO floated on the tide.  On arrival at Maldon for restoration by Tim Goldsack the bow and stern of the coaster were removed to convert her into a dry dock, positioned outside the Heybridge Basin.

With the support of a £675,080 grant from the Heritage Lottery Fund (HLF) a major rebuild was undertaken with new frames, deck and planking, whilst the iron deck beams were refurbished.  The spars, leeboards, rudder and deck fittings were also refurbished, and new sails made.  DAWN was the first sailing barge to be rebuilt with HLF support.  The rebuild took two and a half years and only part of the bottom of the original hull, plus four iron beams and the transom (which had been replaced in the 1970s) remained.  The new hull was considerably stronger than the original 1897 hull.  The new keelson was laminated and English oak was used for the floors and frames.  All the 'straight' work and decking was done with the West African hardwood opepe, whilst the planking was iroko and the lining for the hold and 'ceiling' Douglas fir.  A new set of sails was made by North Sea Sails.  DAWN we relaunched on 19 May 2007.

After fitting out, sea trials took place in July 2008 and included the barge's participation in the Blackwater race for the first time in twenty years.  In May 2011 she carried a load of hay from Tollesbury to London, re-creating the role of a stackie for a BBC TV programme.