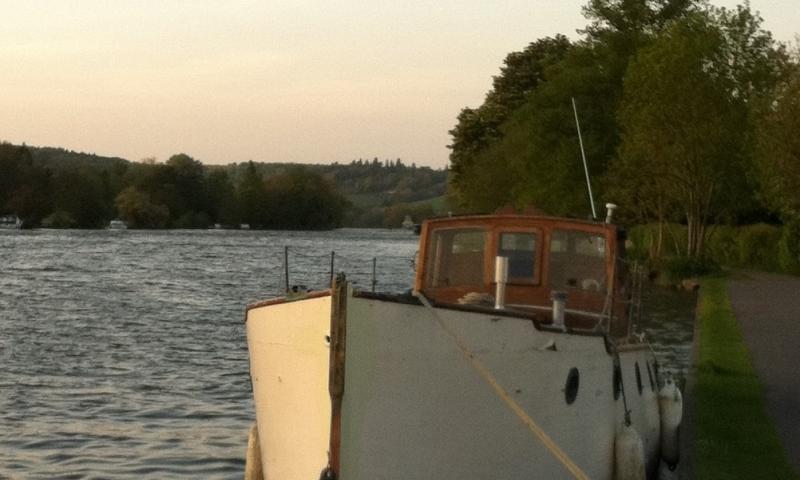 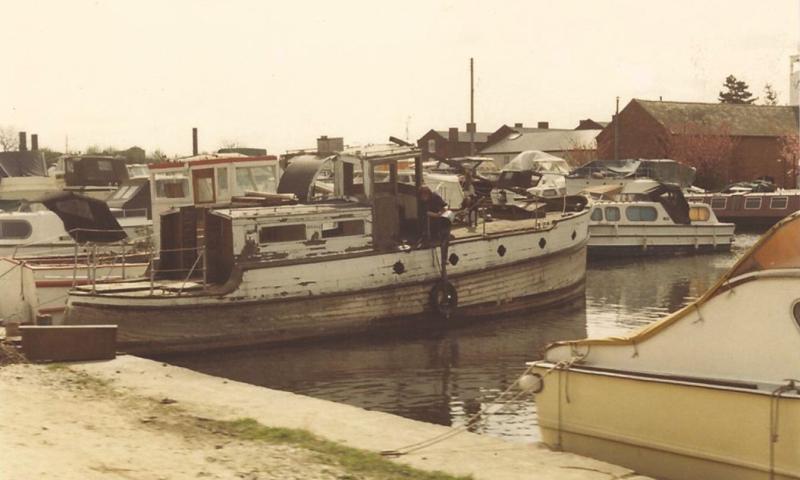 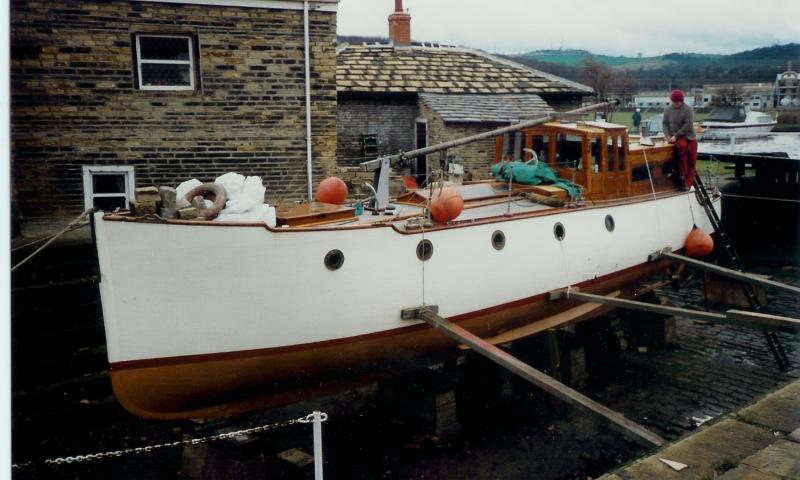 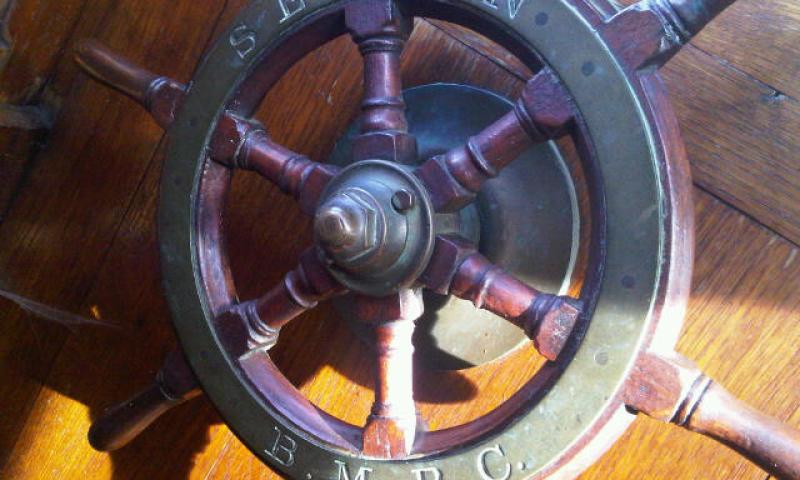 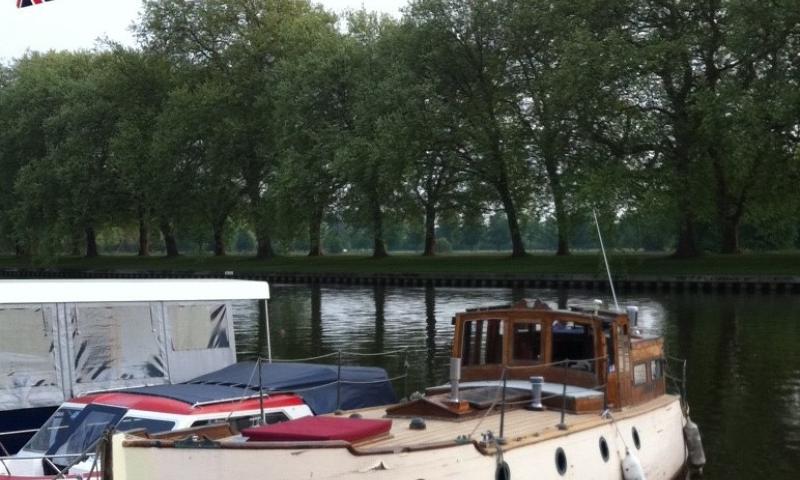 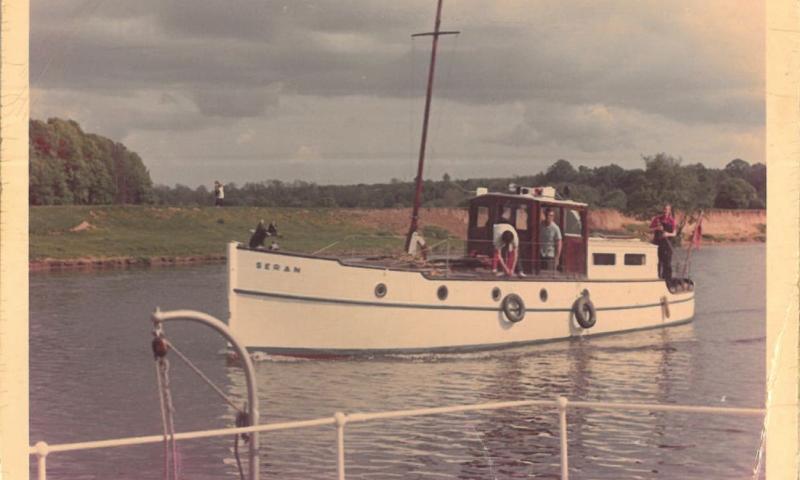 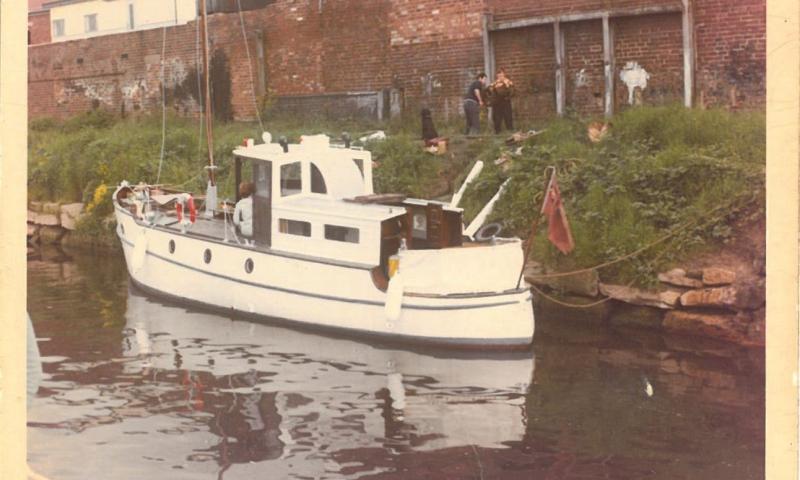 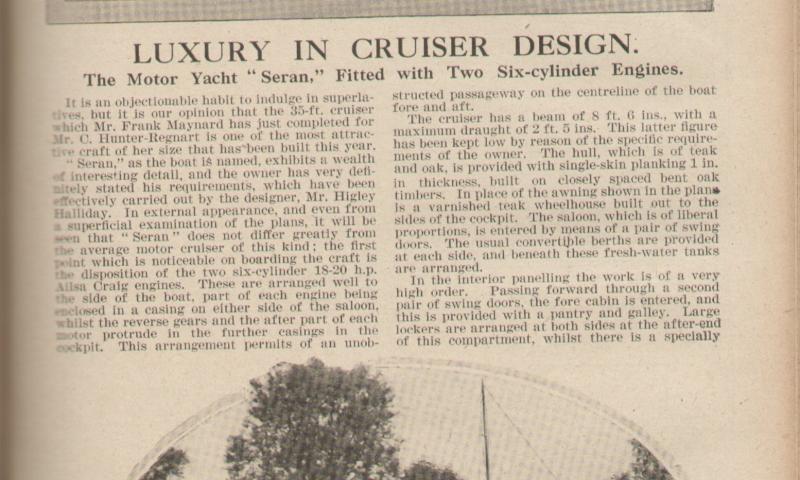 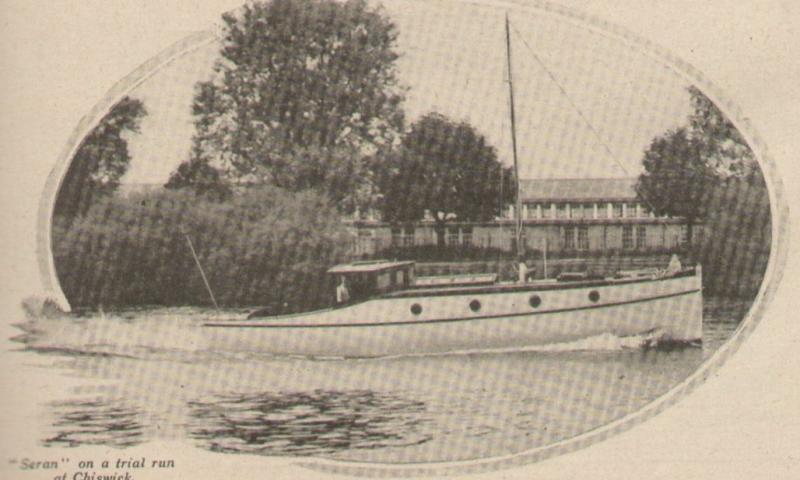 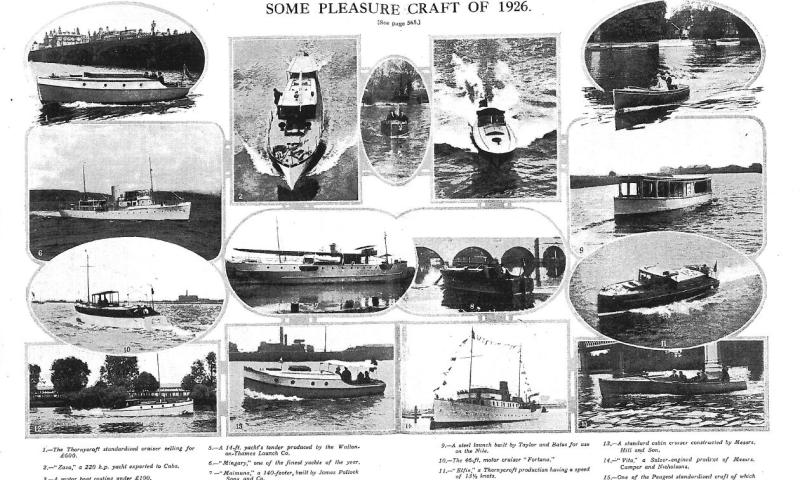 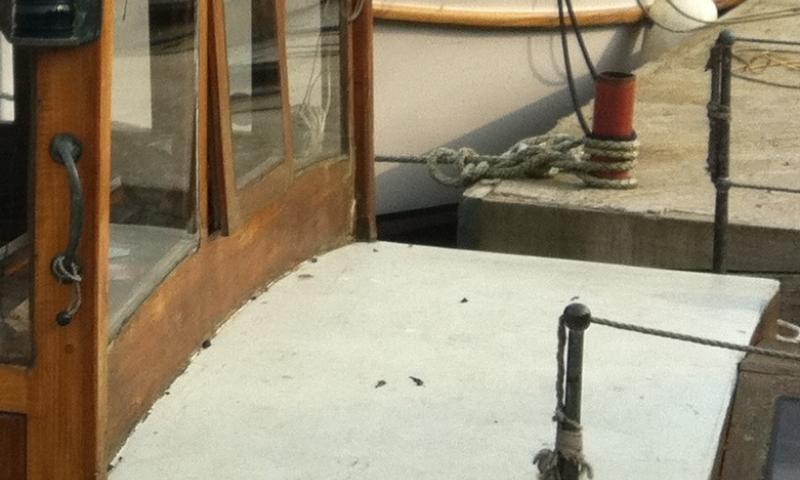 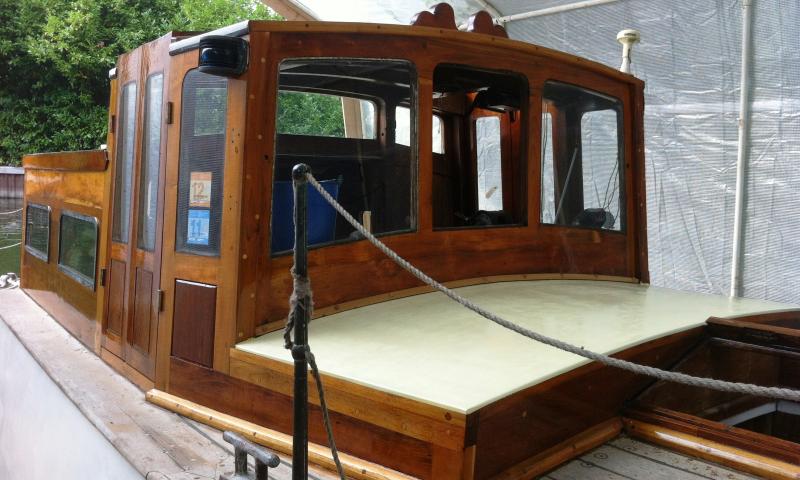 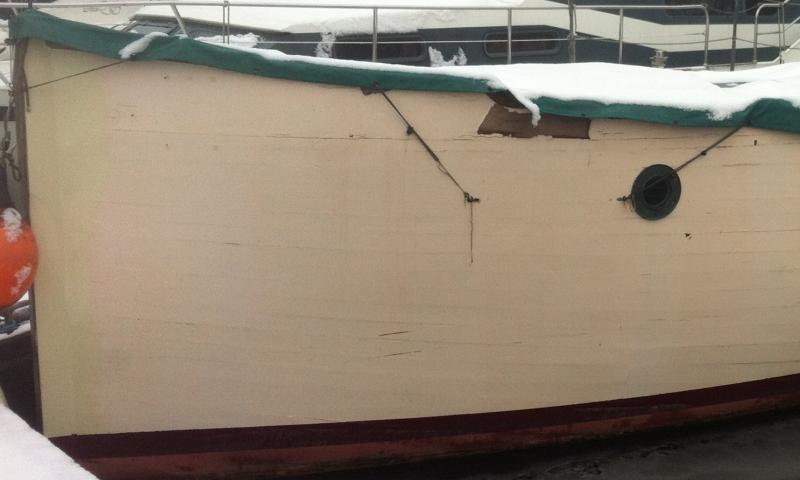 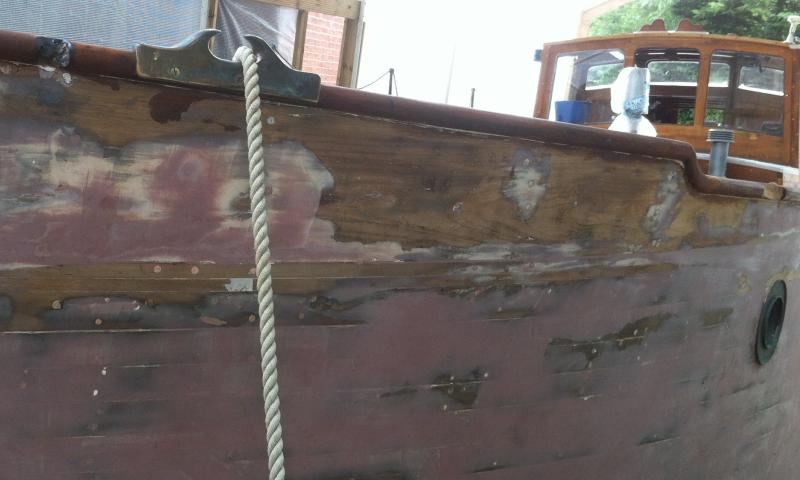 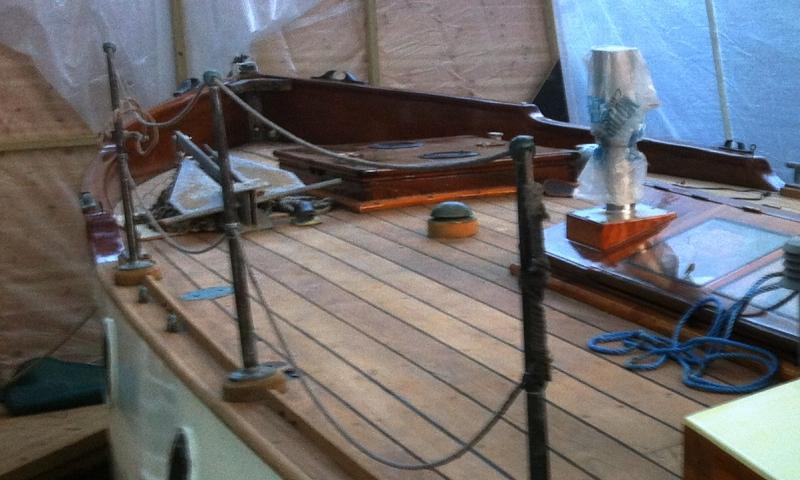 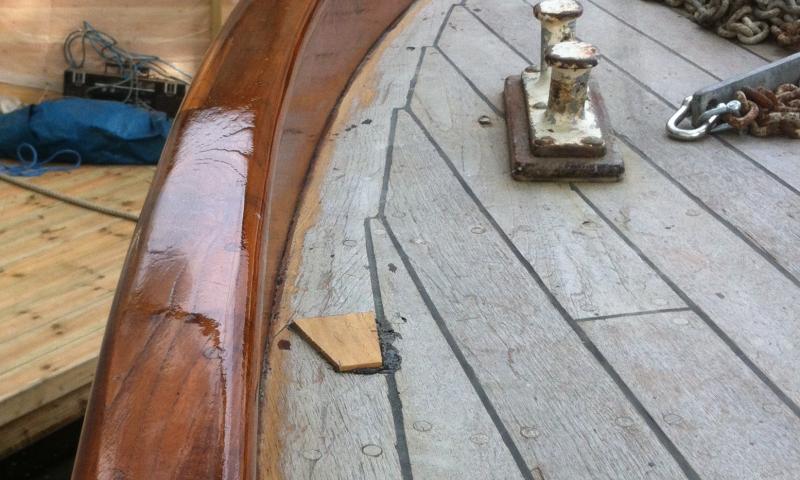 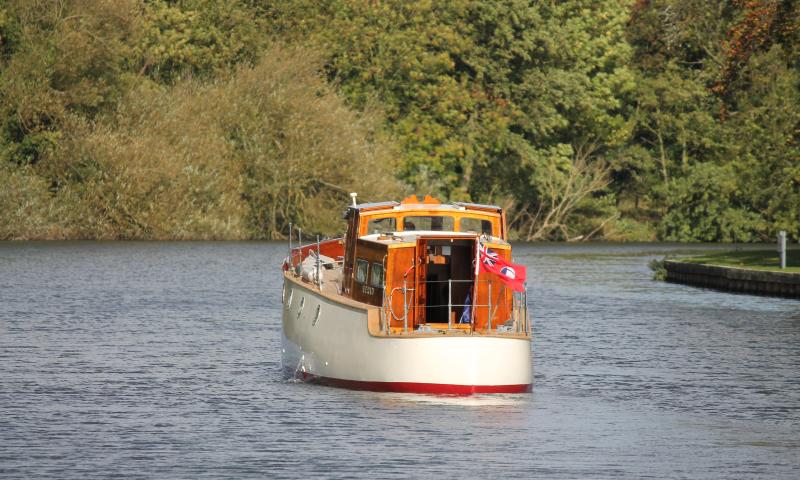 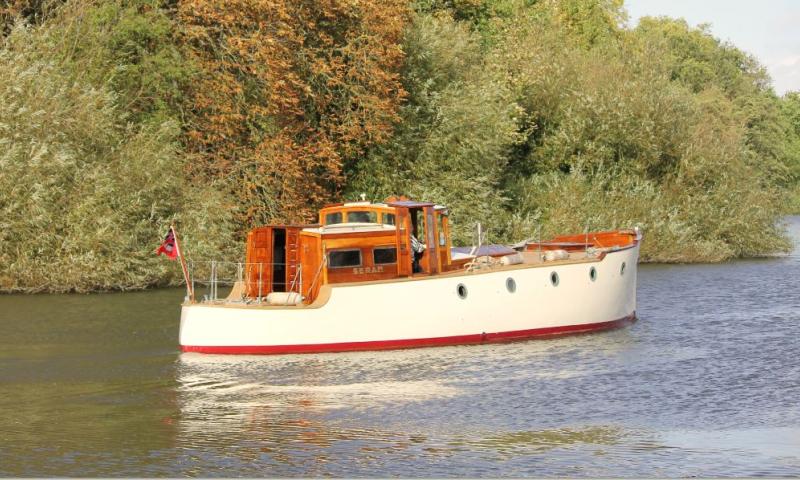 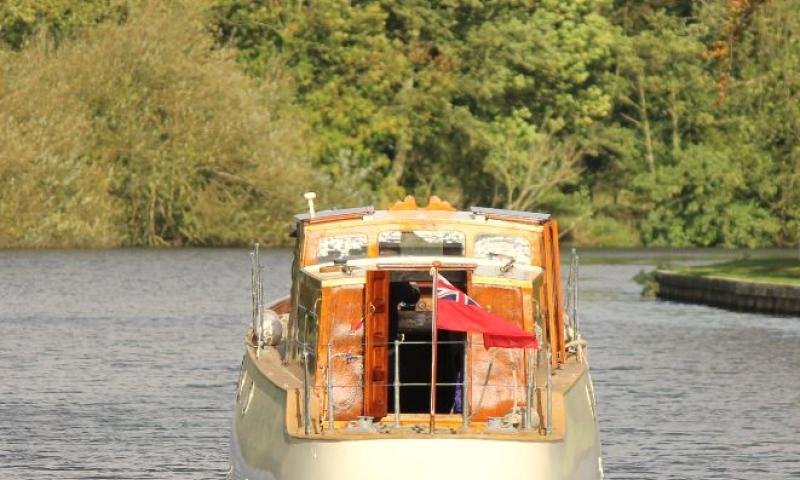 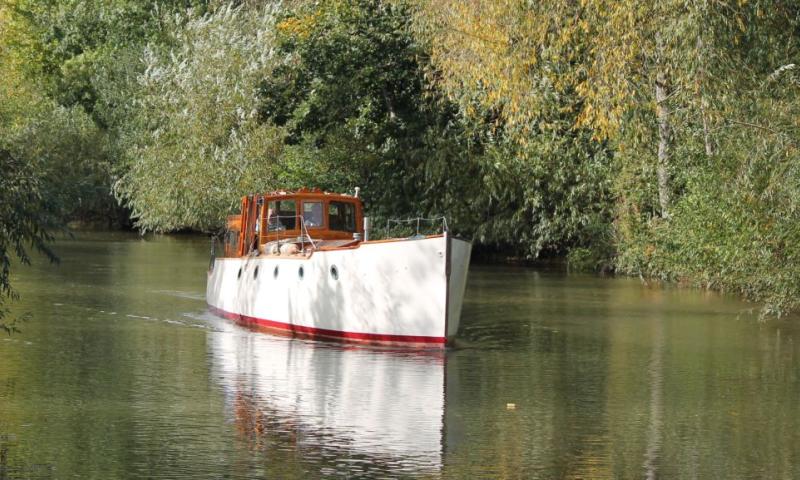 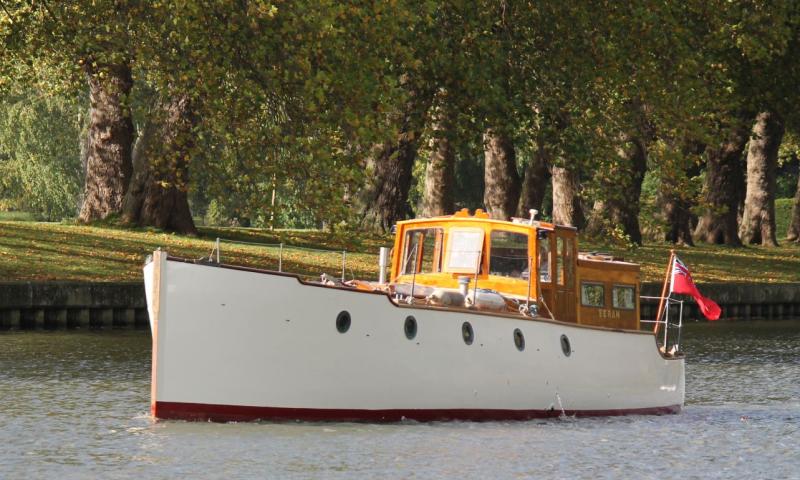 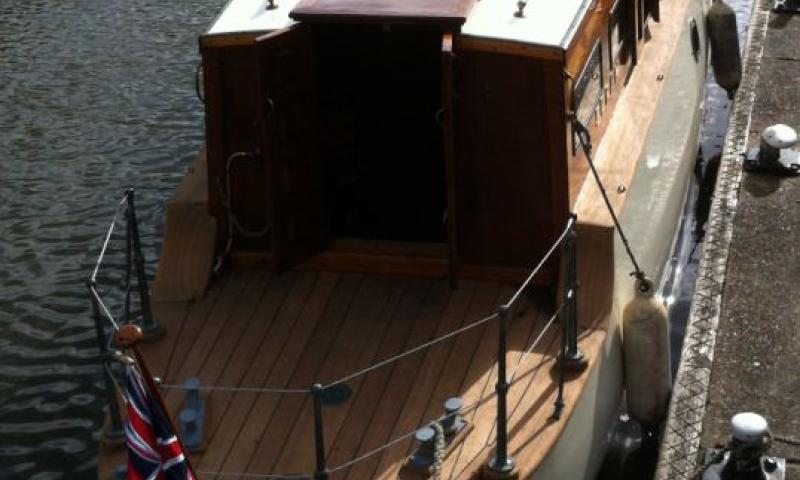 In design and construction SERAN, built 1926, is an example of the now lost boat building industry of Strand-on-the-Green, Chiswick. She was designed by Higley Halliday, the Chiswick based naval architect, built at Frank Maynard’s yard at Grove Park and was originally fitted with a pair of the smallest six cylinder marine motors produced at that time, built by the Ailsa Craig Motor Co. Ltd., of Strand-on-the-Green.  These were replaced during reconstruction in 1934 and the vessel now has twin Lister Blackstone’s fitted 1957.

The quality of construction reflects the affluence of her original owner. She is of timber carvel construction, built to the highest specification with 1” teak planks on oak frames and copper fastenings. Her hull was heavily reconstructed in the 1980s, with 175 oak ribs replaced, most fastenings and all the keel bolts.  The hull timber remains almost completely original, with no signs of degradation and the solidity and craftsmanship of the original build has been one of the key factors in her survival.

Although the current wheelhouse and aft cabin are not to the original design and much of the interior has been re-configured, SERAN has retained many original fixtures and fittings. The frosted interior light fittings are embellished with  moulded art deco motifs and the original bronze name letters are in a modernist style, reflecting the build period (the Paris Exhibition or “Exposition Internationale des Arts Décoratifs et Industriels Moderne” was only a year earlier in 1925). The ship's wheel, dating from 1926, clearly links SERAN to the former British Motor Boat Club, which merged with the Royal Motor Yacht Club in 1933. She is still fitted with lever extensions for the operation of forward and reverse gears as per her original design, the throttle being controlled by a Chadburn’s telegraph.

SERAN is believed to be the last surviving Halliday designed vessel and one of only a handful of surviving craft built by Frank Maynard.

SERAN is a well-documented vessel and was featured on the front cover of the 10 September 1926 edition of Motorboat magazine, described as “one of the most attractive craft of her size that has been built this year”. She may have been originally commissioned by Owen Nares, the west end actor and ‘matinee idol’, which would explain her name (‘Seran’ being the reverse of ‘Nares’), but this link has not been verified.   Later entries in The Times detailed successful fishing trips made by her first owner, C. C. Regnart (“C. Hunter-Regnart”) - President of Maple & Co. Ltd. and member of the British Motor Boat Club.  Her original line drawings and arrangement plans survive and extensive research into SERAN’S history has supported many of the subsequent anecdotal tales about the vessel.

It is believed that she may have been taken to the Mediterranean in the 1930s by Regnart’s well-known professional skipper, Benjamin Chaplin.  Her movements during the Second World War are unknown as she is not listed in Admiralty or Ministry of War records.  In 1946, she was acquired by Geoffrey B. Wright of Belbroughton which marked the start of a connection with owners based in the Worcestershire and Staffordshire region lasting nearly fifty years.  She is remembered on a slipway at a boatyard on the Hamble in the 1950s, with all her fixtures, fittings, engines and full itinerary in dry storage. The original log book remained with the vessel at that time, but was later lost.

SERAN was originally designed as an estuary and coastal fishing boat for day or weekend trips and her dimensions are typical of such a vessel. Her draught was shallow to facilitate cruising on rivers, tidal estuaries and inshore waters, but would have compromised her sea going qualities. The plumb bow and relatively high freeboard would also have impacted on her handling in open water. Her twin engines gave some comfort in the event of engine failure and also a greater degree of manoeuvrability. In the case of the six cylinder models originally fitted, these would have afforded greater smoothness of operation and less vibration.

Her design is a product of her original owner’s 'specific requirements' and one unusual feature at build was the inclusion of a sink for photographic purposes, with her cabin designed to double as a dark room. Her relatively large, open cockpit with ample storage below the deck was ideal for sea fishing and the storage of fishing equipment, while the convertible berths in the saloon provided overnight accommodation for trips further afield.

Following re-construction in 1934, her intended use appears to have changed to include extended voyages, with her increased waterline length reducing pull down at hull speed and improving stability at sea. The cockpit was replaced with a low aft cabin with twin berths, more suited to extended voyages and the twin Parsons 4 cylinder engines increased the combined power output.  Her draught was further increased in the 1950s to improve general seaworthiness.

The hull shape itself reflects the changing trends in design in the 1920s and 1930s.  She has a plumb bow, typical of the 1920s and earlier, while her hull broadens amidships with a pronounced tumblehome producing a pleasing aesthetic effect and one which is unusual for a craft of her type.  As well as serving a practical purpose, the canoe / cruiser stern, added as part of the reconstruction, is significant in reflecting the changed fashion of the mid 1930s.

SERAN has now been restored to her original setting on the River Thames and is based on the non-tidal Thames at Surrey.

SERAN (Official No: 160473) is a fine and largely original example of a twin screw gentleman's motor yacht, designed by Higley Halliday M.I.N.A., M.I.A.E. (Hon. Life Vice President of the Little Ship Club) and built by Frank Maynard in 1926 at Strand-on-the-Green, Chiswick.

She is of timber carvel construction, 1” teak planks on oak frames, with copper fastenings and bronze fittings and originally designed and built to 35 ft LOA, with a gross tonnage of 9.59 and fitted with twin six cylinder 16/20-h.p. Ailsa Craig petrol engines.

SERAN was commissioned by C. C. Regnart (“C. Hunter-Regnart”) - President of Maple & Co. Ltd. from 1926 to 1953 and member of the British Motor Boat Club (B.M.B.C. latterly the R.M.Y.C.) - as a fishing boat, with fore cabin designed to double as a dark room for developing photographic film.

SERAN was featured on the front cover of the 10 September 1926 edition of Motorboat magazine, described as “one of the most attractive craft of her size that has been built this year”.  The September 1926 edition of Yachting Monthly also briefly refers to SERAN, commenting on the engines’ reverse gear extensions; a feature which remains to the present day.  SERANwas first registered with the Port of London on

In 1934 SERAN was re-constructed (re-registered 1935) to her current design; the significant changes being the creation of the aft cabin over the cockpit and addition of the canoe stern, increasing the LOA to 39.9 ft.  The engines were replaced with twin Parsons 4 cylinder paraffin engines, increasing b.h.p.  Evidence of copper sheathing on the hull below the waterline suggest that SERAN was built to the highest specification and possibly moved to warm waters, presumably the Mediterranean, during this period.  Regnart was also the registered owner of the ketch, CLEONE, in the mid 1930's, registered with the Port of Cowes.

SERAN's movement and ownership between 1939 to 1945 is currently unclear but given her absence from Ministry of War and Admiralty records, it is assumed that she was winterised late autumn 1939 and remained immobilised for the duration of the war.  Alternatively, it has been suggested that she may have been in a neutral port at the outbreak of war therefore avoiding requisitioning.

However by 1945 she had been acquired by G. B. Wright of Stourbridge, Worcs. Managing Director of William Hunt & Sons and member of the Severn Motor Boat Club (S.M.B.C.), who was responsible for installing twin Hyland Morris 4 cylinder petrol engines.  In 1956 she was sold to L. J. O'Connor of Llanelly, Carmarthenshire who fitted the current twin Lister Blackstone 3 cylinder diesel engines in 1957.  She is remembered as being for sale on a slipway at a yard on the Hamble in the mid to late 1950s, with all fixtures and fittings removed and in dry storage. In 1958, SERAN had passed to R. L. Griffin of Kidderminster, Worcs. who owned her for eleven years.  On 7 June 1958, she was recorded at Lizard, bound for St. Ives in the Lloyds Yacht Movements.  During the 1960s, Griffin was also the registered owner of WAIRAKEI II.

SERAN was acquired by D. C. H. Ross of Knightwick, Worcs. in 1969.  On 31 July 1971 she was grounded on a sand bank in a heavy swell, on the Aberavon Beach side of the River Neath near the Mumbles and, although sustaining damage, was fortunately re-floated on the next tide.  In 1974 she passed to a new owner, J. Guest of Wolverhampton, and kept locally on the Severn before falling into a state of disrepair in the late 1970s and early 1980s.  By 1982, the empty hull of SERAN lay abandoned in the Stourport Basin and she was repossessed by British Waterways and sold at auction to R. J. & M. L. Fee.  A letter found on board led to the discovery of the engines and original fixtures and fittings which had been unbolted for safekeeping.  The Fee’s owned SERAN until 1992 during which time she was re-assembled and restored, re-fitting 175 oak ribs, 9,000 copper fastenings and keel bolts, relaying the deck, reconstructing the wheelhouse and rebuilding the engines.  During this period, SERAN was moved from the River Severn to the Calder & Hebble Navigation in W. Yorkshire.

In 1992 she was sold to S. Monks of Strood, Kent and moved to the River Medway and, in around 2002, sold to M. Killoran who kept her at Hoo Marina on the tidal Medway, taking her on coastal voyages to Brighton and Ramsgate as well as the swales and swatchways of the East Coast.

SERAN was acquired by her current owner in September 2010. She is available for TV & Film charter.