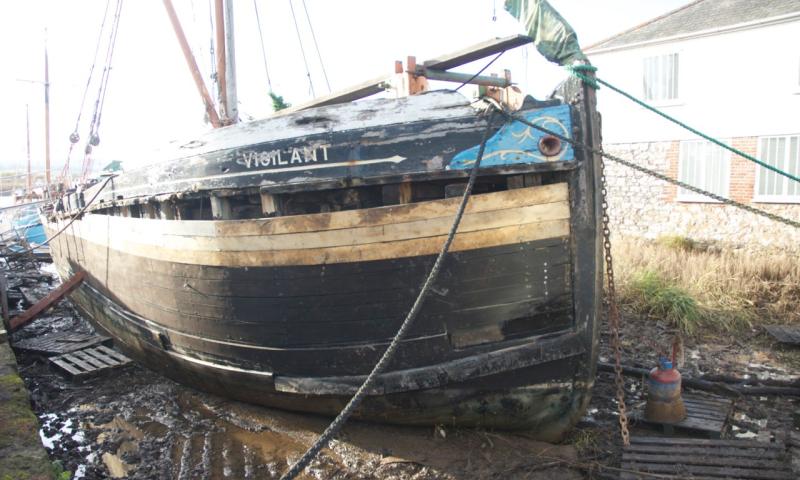 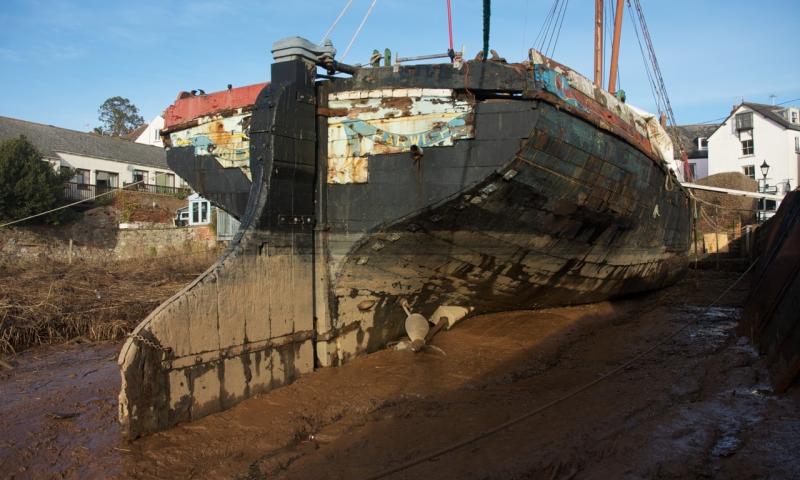 VIGILANT retains the hand winches, windlass, numbered coaming hatches and lee boards from her sail trading days, although she has now been fitted with an auxiliary engine.  Her transom, although now doubled, bears the original carvings and down below, she has her P.L.A. number carved into the deck beams, along with the trade certification for the master and seamen’s accommodation above the rear cabin bunks.  The original iron deck beams and steel keelson survive, whilst her raised hatches were fitted following a P.L.A. directive put in place to reduce the risk of these vessels shipping water at sea.  The large steel beam that acted as a brace when the vessel was loaded survives and evidence can be seen of the way the coaming was raised to increase cargo capacity, as well as the numbered breather planks which were replaced when the hold was loose packed.

VIGILANT is now one of only three barges built by the Orvis and Fuller yard still in existence and was one of the last barges to be designed and commissioned by the hauliers known as the ‘Racing Horlocks’, embodying  all their accumulated skill of operating and racing these vessels.  She became ‘champion of the Thames’, winning the 1928 annual barge match under famous skipper Chubb Horlock, and setting a speed record which has never been equaled.  VIGILANT is the subject of the well-known book ‘Sailorman’, written by Commander E.G. Martin (founder of the Royal Ocean Racing Club) about his experiences onboard.  She is reputed to have been the first Mistley barge to ferry coal to France after the First World War and also saw service during the Second World War, being requisitioned by the Admiralty, after which she returned to trade.

VIGILANT was designed for speed, both as a racing vessel and to facilitate cargo carrying.  Her bluff bow, long after runs and codfish transom all made her very fast, whilst her flat-bottomed hull allowed her to navigate shallow waters for loading.  Her large hold gave her a huge trading capacity, able to carry a payload of 150 tons at sea and 180 in estuary work.   VIGILANT carried almost 4000 square feet of canvas and is unusual in retaining her flax main sail.  She has a typically large rudder, designed to increase maneuverability, with the original iron counter screw steering device which was unique to these craft, as well as the traditional leeboards.

VIGILANT is a Thames Spritsail Barge of double planked oak construction and has a Ford diesel engine of 180 bhp. She was built in 1904 by Orvis & Fuller of Ipswich. First registered at Harwich and owned by Alf Horlock, the vessel was built with the objective of being eligible for the barge racing matches and achieved success in this field.

VIGILANT was sold ultimately to the London & Rochester Trading Company and converted to a motor barge. Re-rigged in the 1970s as a sailing barge, she was sold in the early 1990s as a houseboat.

Restoration started in September 2012 with the objective of returning her to her original state as a racing barge.