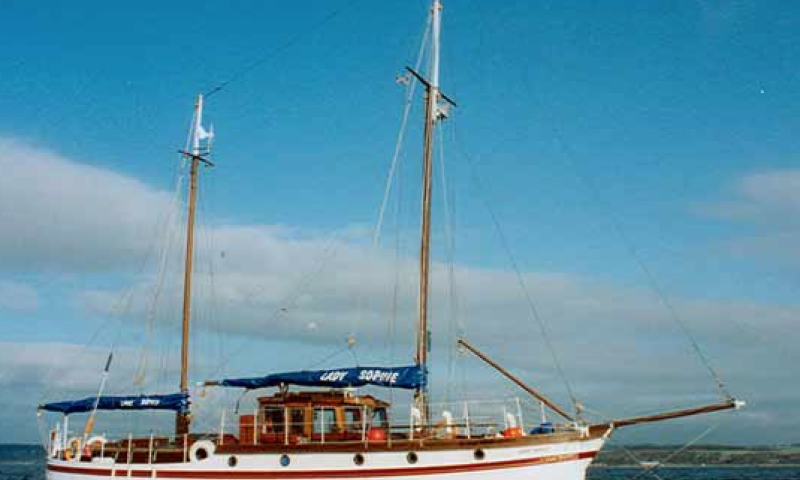 The LADY SOPHIE was designed by J.A. McCallum and built by Dickies & Son  of Tarbert, Loch Fyne in 1911 and was originally named Lady Jean. She was flush decked and had twin lug sails. She was powered by a Gardiner paraffin 2 cylinder engine and had a chimney in the middle. There is a 1912 photo of Lady Jean in the “Boatman” magazine of 5 December 1912, indicating John Paterson as an owner.

She was registered in 1934 again in Dublin as the LADY SOPHIE and is thought to have been named after Lady Sophie of the Guinness family but this has not been confirmed.  There is no known record of her history from the 1930s to the 1960s but it is suspected that she spent some of this time in the Medway area.  At some time a wheelhouse was added in front of the cockpit and she was refitted at the yard of Machin Knight and Sons in 1970.  In the late 1980s she was re-decked, re-engined and the wheelhouse was enlarged and moved over the engine amidships. She was also re-rigged with a bowsprit at this time.  A topmast was added to the mizzen mast which became the main mast and jib boom was added. She was re-caulked with cotton above and oakum below the waterline, and the hull was sheathed in copper which was bronze tacked over bitumen and hessian.

The LADY SOPHIE was purchased in Klaipeda, Lithuania in 2005.  For five summers she cruised the Baltic Sea (mainly Lithuania, Sweden and Germany), and in 2011 she cruised the North Sea as far as Ireland.  In 2015 a Lithuanian association acquired LADY SOPHIE and sought to start her conservation and restoration project.