An 'Up and Doon' vessel - the ship they built twice!

The Maid in 1953
Assembled in the Glasgow shipyard of A&J Inglis, the Paddle Steamer Maid of the Loch was first of all bolted together and then taken apart, transported to her new home in Balloch on rail wagons and reassembled on the Balloch Slipway before her launch into the sparkling waters of Loch Lomond on Thursday 5th March 1953.

'The Ship They Built Twice' refers to being constructed in a shipyard, but not launched (in Glasgow); taken apart and transported in sections by rail to Loch Lomond; reassembled beside the loch and launched there.  She is believed to be the only ship in the UK with this specific history.

Licensed to carry 1,000 passengers, she was the largest paddle steamer to sail on Loch Lomond and was host to royal guests and celebrities as well as three million day-trippers during her 28 years on the water.  Many of these people have very cherished memories of sailing on the Maid and many more know of the ship by hearing about these memories from older friends and relatives.  Dates, engagements, weddings and wakes – the Maid has hosted them all!

Advertised as having ‘commodious saloons’ and serving ‘lunches and teas of the highest quality at popular prices’ she was the last (and largest) in a long line of paddle steamers to sail on Loch Lomond.  For 28 years, she gave great pleasure to millions of visitors who enjoyed sailing on the ship and exploring the villages and climbing the hills around the shores.

The Maid’s popularity as a pleasure steamer was at its height in the 1950s and early 1960s.  But as the lure of affordable foreign travel beckoned, so passenger numbers and revenue dwindled.  Decommissioned in 1981, the Maid was subjected to a sorry period of neglect, decay and vandalism until her purchase, in 1992, by Dumbarton District Council.

Funding
It was in 1996 when, on the point of dereliction, she was rescued by the very determined volunteers of the Loch Lomond Steamship Company (LLSC), who continue to take care of her to this day. An ambitious rescue mission, where the aim was always to return the ship to sailing again on the Loch, was launched.

Since then, the charity has raised over £2m in creating the Maid as a static visitor attraction; rebuilt the steam slipway; rebuilt Balloch Pier; built new visitor access and car park; and in 2019 completed a £1.1m refit of the ship, to budget.

Following a successful HLF bid in 2015, they undertook to raise £1.7m in order to release Heritage Lottery Funding funding of £3.8m which will allow them to return  Maid to full steam operation.  They did manage to raise that amazing amount but sadly, in Autumn 2018, we were not awarded the £3.5m as the team had hoped.

LLSC has however, had continued support from the Scottish Government Capital Grant Regeneration Fund of £950,000 along with £50,000 from the paddle steamer.
----------

Since 1995 many hundreds of volunteers have helped rescue the ship from a state of dereliction, returning her to the beautiful vessel we all enjoy today. These days around 40 volunteers perform a wide variety of tasks including maintaining the steam slipway engine, repairing the electrics, painting and varnishing, fixing woodwork, guiding visitors, cleaning and hoovering, organising events, selling merchandise, giving talks to interested groups, welcoming visitors, documenting film and other material, distributing information… and the list goes on.

Huge amounts of time have been spent applying successfully (and sometimes unsuccessfully) for the funding needed to bring the ship back into operational condition.  Many hours have also spent dealing with the many and complex regulations surrounding the operation of a passenger vessel.  Their recent application to Heritage Lottery Fund required the submission of no less than 240 individual documents!

The team are now very close to realising their dream of the Maid sailing again by ‘yon bonnie banks of Loch Lomond’.

They need a wide variety of skills to keep our lovely ship afloat and thriving.  Would you like to join them as a volunteer? Download a Volunteer Application Form.
----------

Your help is needed to Sail the Maid!  Be part of the journey and help return the paddle steamer cruising to Loch Lomond for the enjoyment of everyone, today and for future generations.  How to donate here and see here for further information on how to support.  You can also donate £5 text '1953MAID' to 70085.
----------

How the Shipshape Network has helped the LLSC!

Maid of the Loch is already in contact with some of our other Shipshape Network Regional Projects proving the benefits in sharing contacts and experiences!

- Explorer Preservation Society: loaned them their reversing engine valve so they could make a pattern from it and make a new one as theirs had been stolen years ago
- Waverley Excursions: gave volunteers and contractors free access to their engine room to learn about pipework etc.
- Daniel Adamson Preservation Society: has donated a steam pump.
----------

May 2021 Announced in online news story that Maid of the Loch will not sail until 2022 and will use this year to undertake a complete survey and make any necessary repairs to the hull. Full story

Mar 2021: £94,000 funding from Historic Environment Scotland has been awarded for work to repair and replace the Balloch steam slipway, the only on surviving and operational in Europe.

Dec 2020: Happy 25th anniversary LLSC! Read about some of their remarkable achievements so far.

Jun 2020: Maid of the Loch has launched an Covid-19 fundraiser - with some great rewards too!

May 2020: Longing to visit Loch Lomond?  Let Maid of the Loch take you on a virtual cruise round the bonnie banks!  While the ship is in lock down, the charity has released this new and exciting way of raising funds.

October 2019: Maid of the Loch paddle steamer started for first time in 40 years 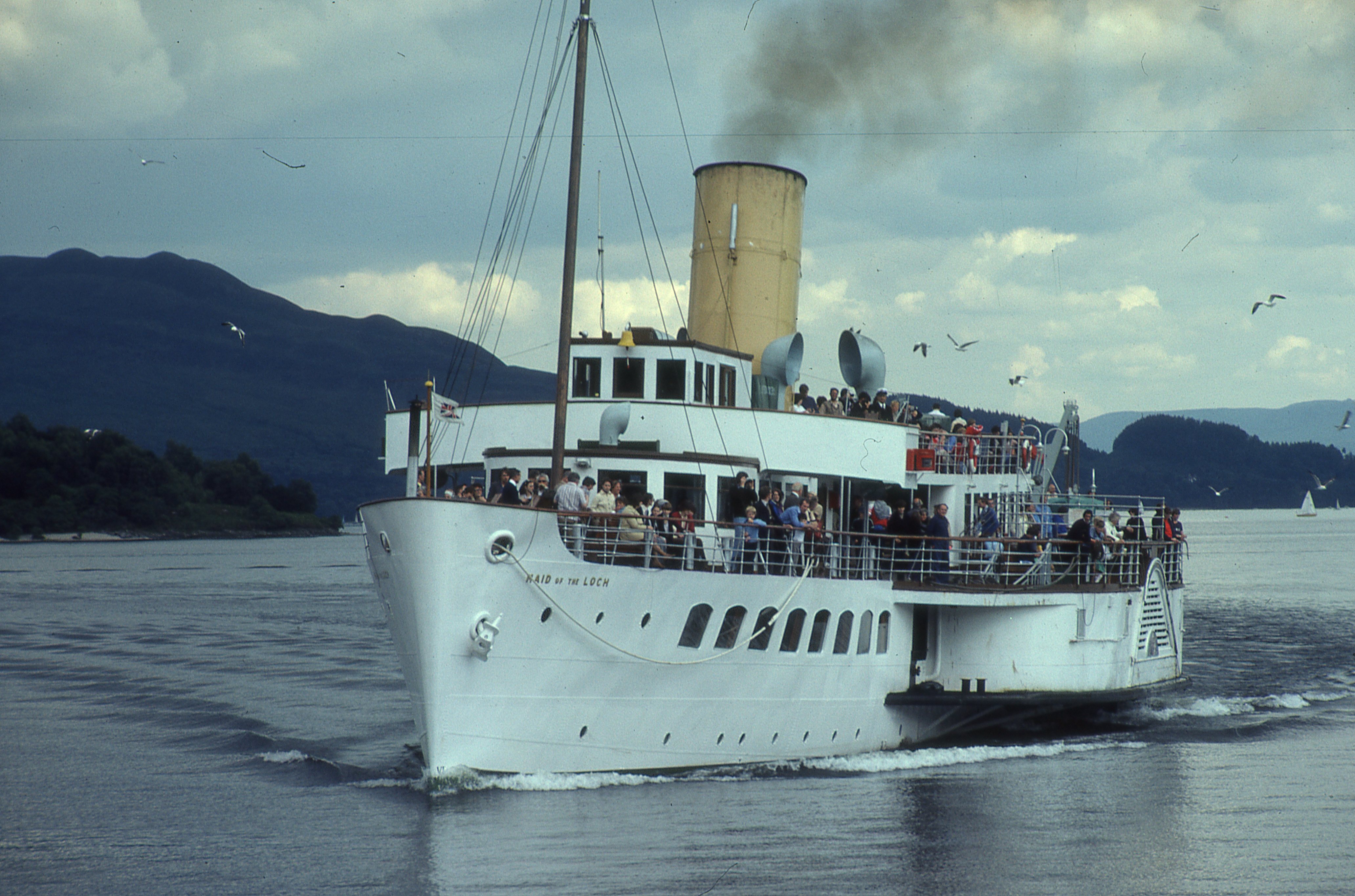 The engines of the last paddle steamer to be built in Britain have been fired up for the first time in almost 40 years, raising hopes that it might yet set sail on Loch Lomond again.

The Maid of the Loch has reopened to visitors following an extensive £1.1m restoration project which included a total overhaul of the original engine room.

Now operating as a static tourist attraction, the charity responsible for its upkeep said seeing the ship’s paddles turning again was a “significant” milestone.

First launched on the loch in March 1953 with a licence to carry 1,000 passengers, the Maid hosted royal guests, celebrities and around 3m day-trippers during her 28 years on the water.

A £950,000 capital grant funding award by the Scottish Government to Loch Lomond’s paddle steamer Maid of the Loch has been confirmed, meaning the goal of returning the ship to sail lives on.

The package from the Regeneration Capital Grant Fund (RCGF) awarded earlier this year has hung in the balance following the disappointing news from Heritage Lottery Fund (HLF) to reject the Maid’s £3.7m funding bid. Today’s announcement from The Scottish Government means the Maid can look to 2019 with a renewed focus, with work already confirmed including repairs to the ship’s hull, creation of an education facility on board, refurbishing the main function suite, and overhauling the engines to enable them to turn with steam.

John Beveridge, Chairman of the Loch Lomond Steamship Company, said: “This is a huge boost to the project and will transform the Maid’s attraction to visitors. After the shock of HLF rejecting our bid, this gives the charity real hope to continue with our efforts.

“Our next step will see the ship brought out of the water in January onto the Balloch Steam Slipway to allow us to carry out an essential ultrasound test of the entire hull to check its condition. Any repairs will then be carried out, including replacing the ship’s port side belting, the wooden fender that protects the hull at the pier. Slipping the ship will be a “must-see” spectacle and a major undertaking for us all. It will be the first time any work has been done on the hull since 1981, so there is great excitement among our volunteers who can’t wait to help”.

The biggest transformation to the ship next year will see the engines turning under steam power. Work will include having the engines professionally overhauled, new pipework installed, and a mobile boiler plant sited on the pier producing enough steam to allow the paddles to turn.

A delighted John added: “Everyone who has visited the Maid over the years have said we must get this beautiful ship sailing again. Getting her in steam and with her paddles turning again is the next best thing, and we anticipate great interest next year as people come to watch her majestic engines moving for the first time in 37 years.”

The Paddle Steamer Preservation Society has also confirmed a grant of £50,000 will still be granted, taking this work package to £1 million.

The Maid currently operates as a static tourist attraction and hopes to gain industrial museum status for the ship and steam slipway as a growing number of artefacts are collected and restored to working condition.

The charity, the Loch Lomond Steamship Company (LLSC) have worked tirelessly since 1996 to transform and restore the ship, with the aim of bringing her ‘back to life’ and fully operational once again. 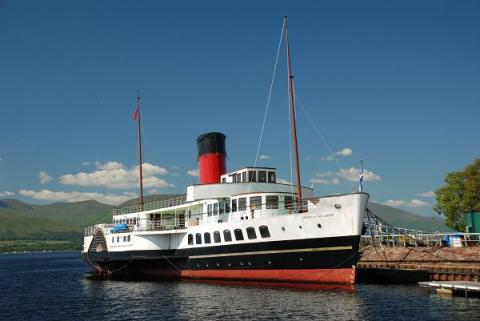