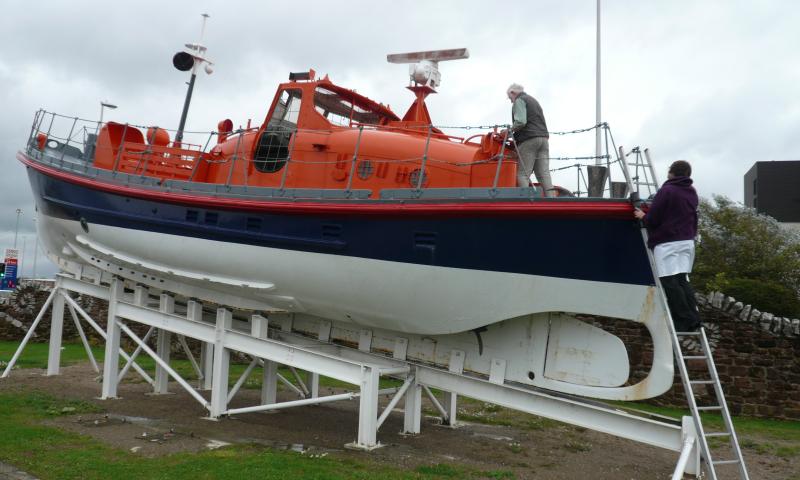 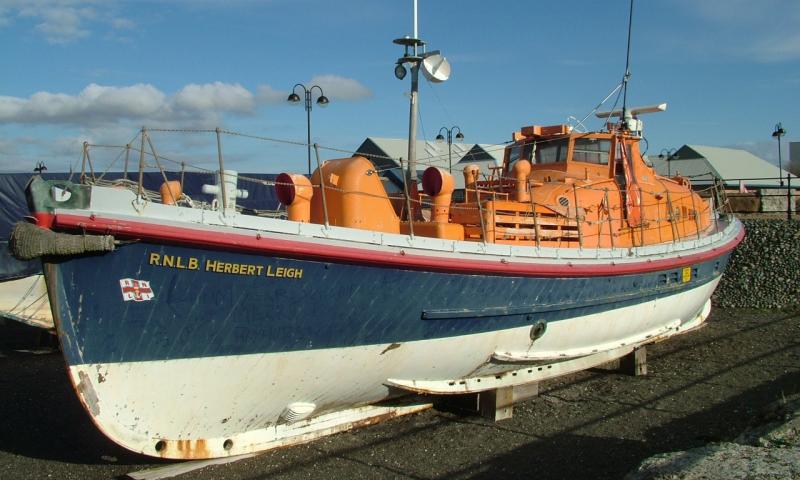 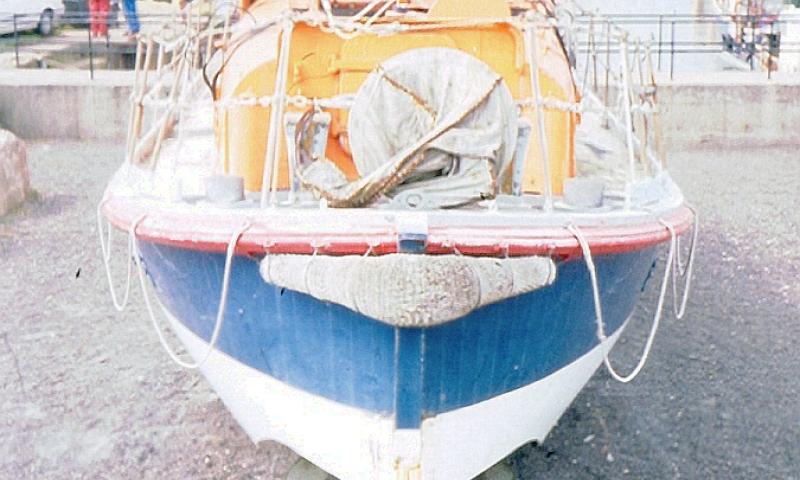 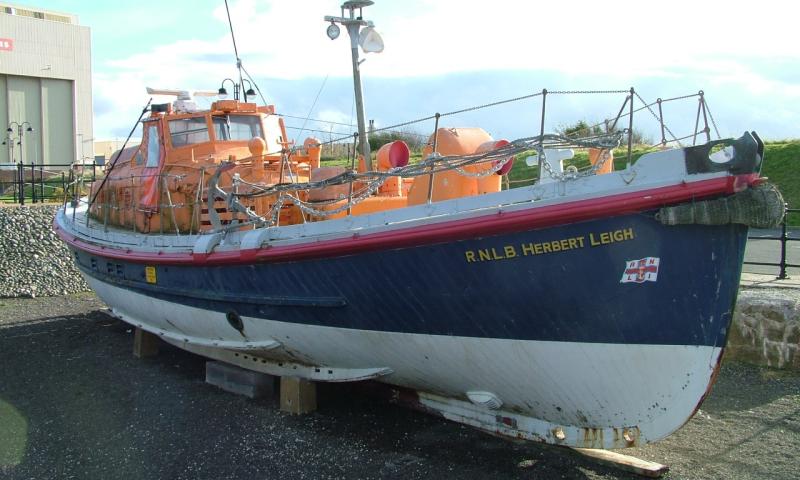 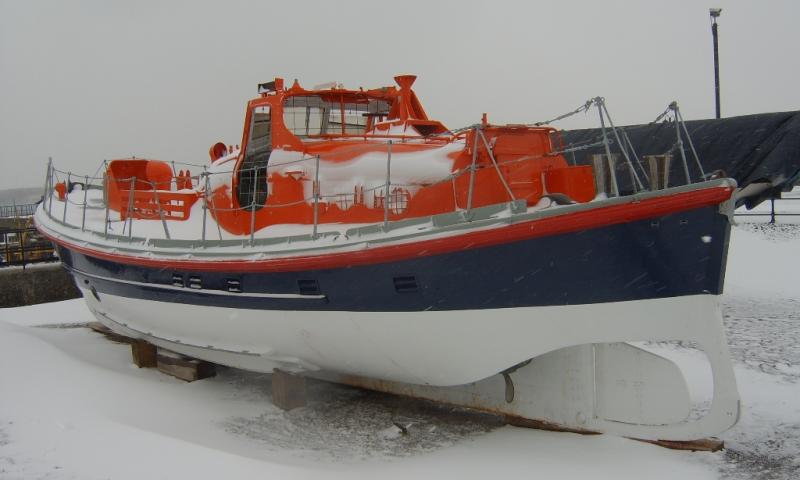 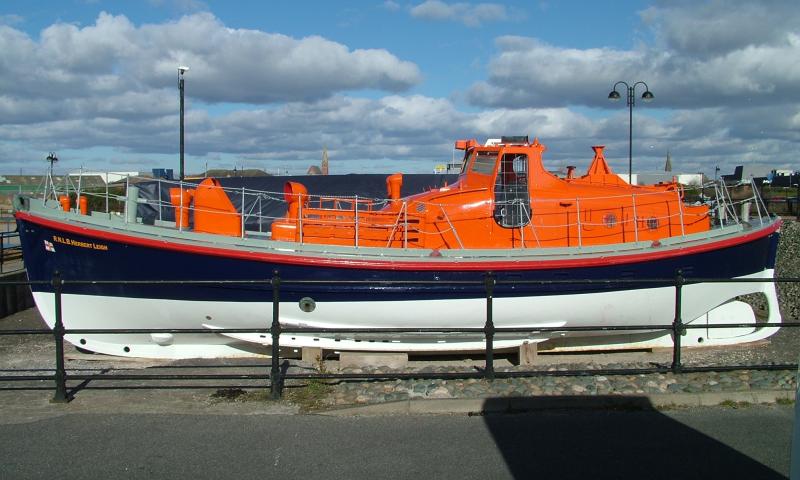 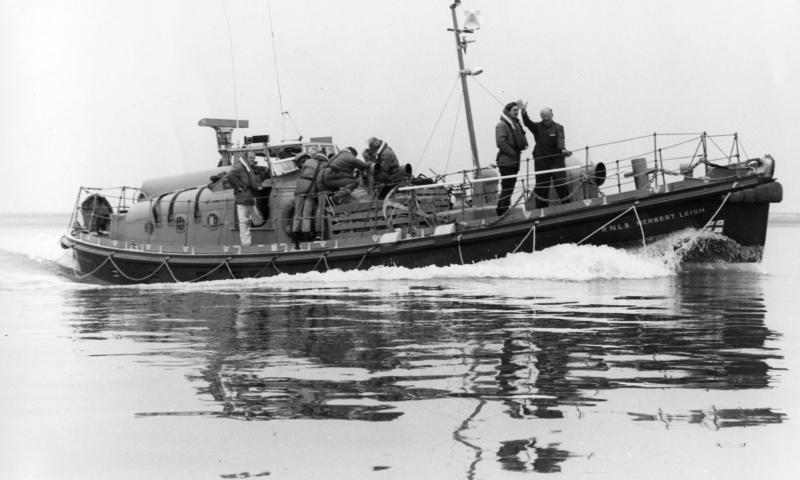 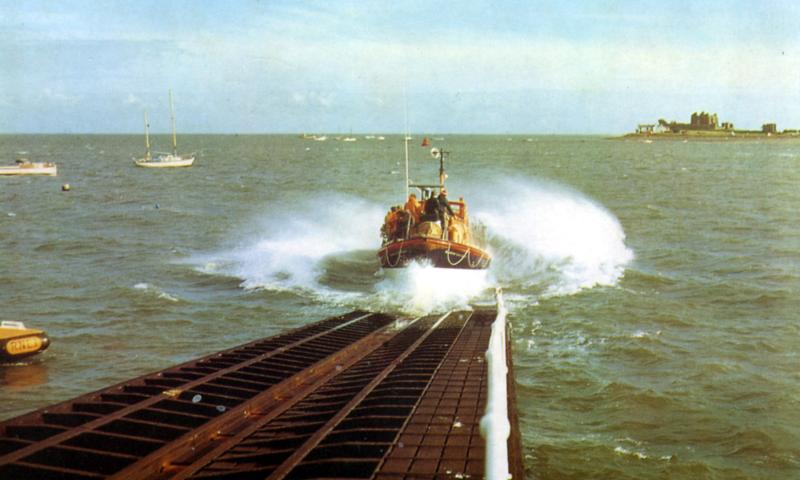 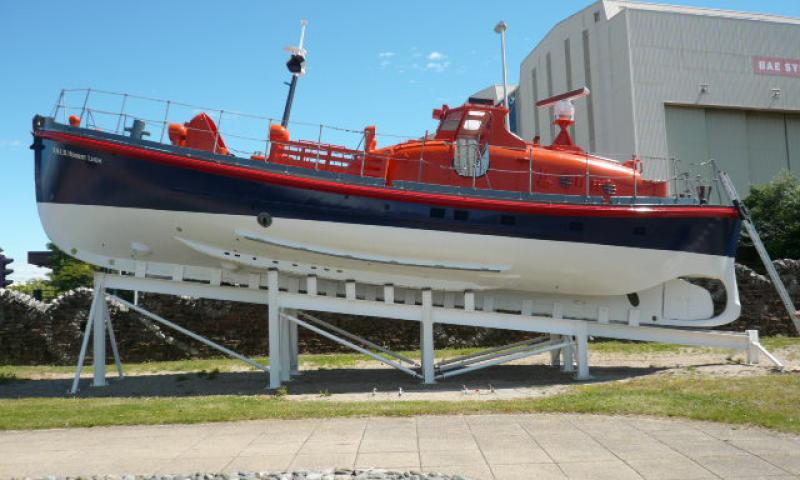 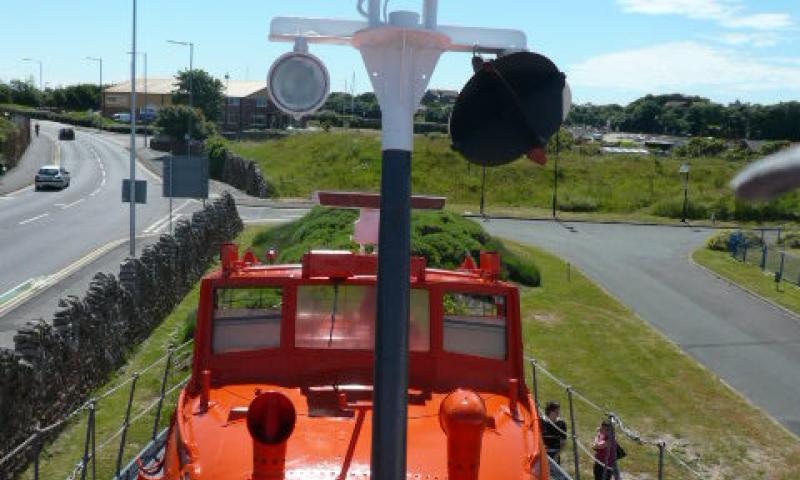 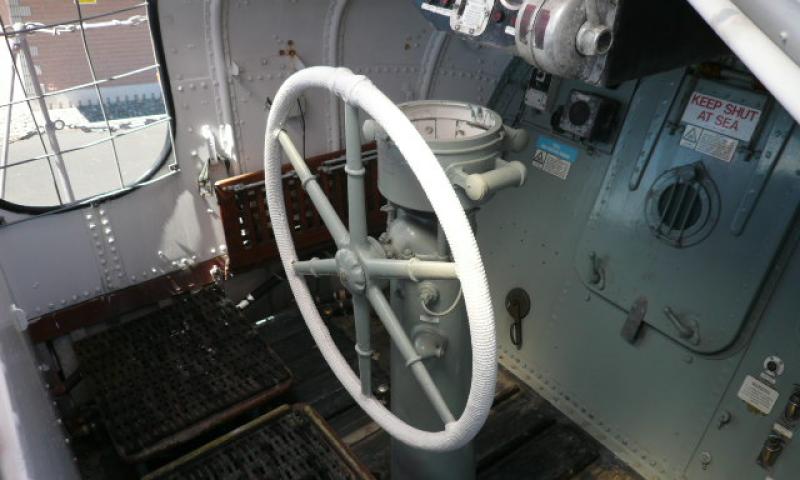 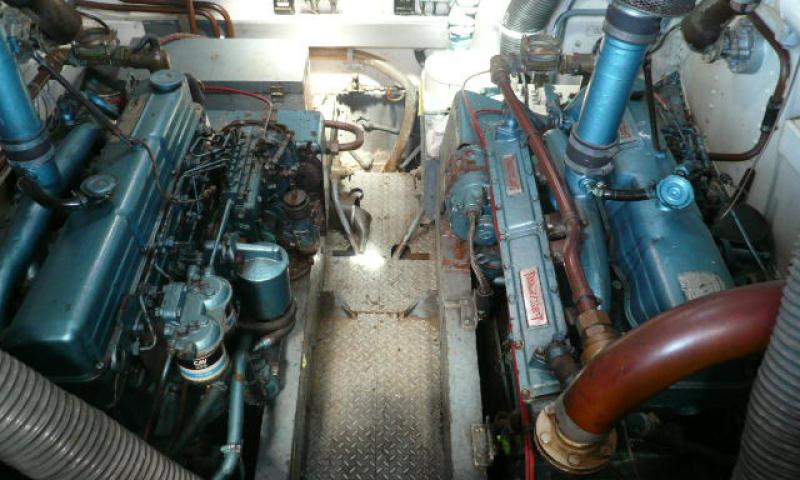 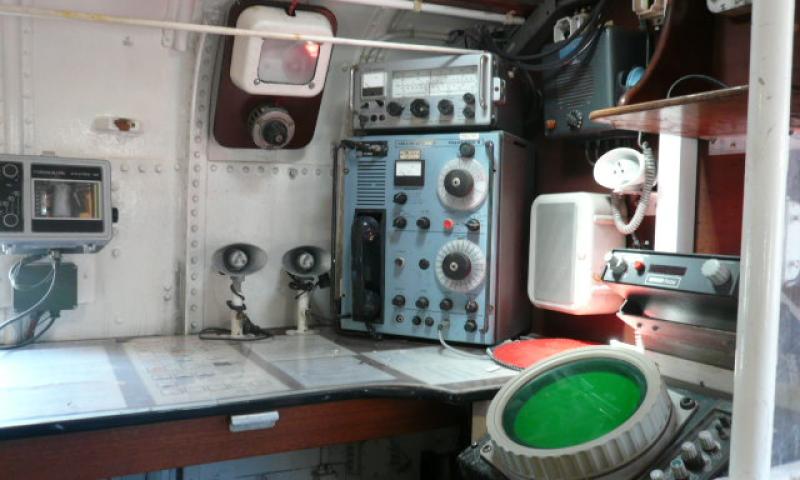 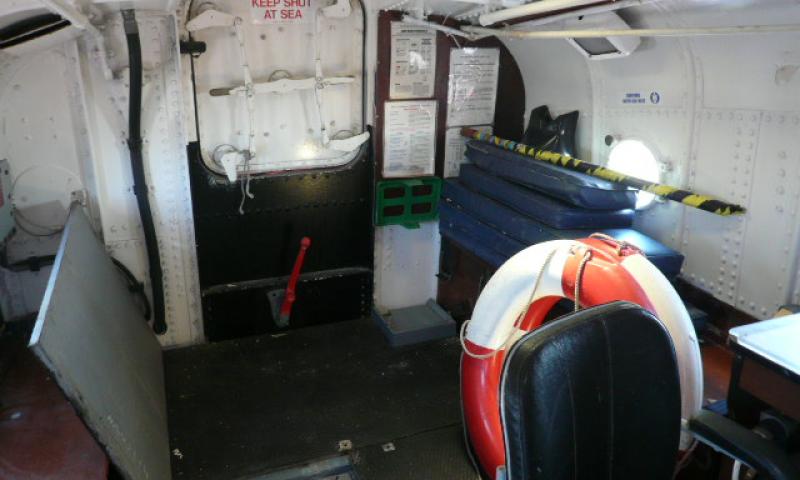 HERBERT LEIGH was the longest serving lifeboat at the Barrow station from 1951 up to the time of her replacement in 1982. In 30 years of service she was launched 136 times and saved 71 lives. She was donated to the RNLI by the Chairman of Leigh’s Paints, Herbert Leigh. He was a Lancastrian who started a marine paint business after going on a round the world cruise in 1919 and seeing sailors mixing up their own paint. The lifeboat was built at the East Cowes Yard of JS White and Co. Ltd and cost £25,855 to build. Her decks are built from mahogany and she was one of the most modern lifeboats in the RNLI on completion, needing a crew of 8 to man her. HERBERT LEIGH was launched only hours after arriving on station as the tanker MERRIMAC reported that there was a sick man onboard. In 1952, shortly after midnight on July 13, a young girl near Bootle told her father that she could see a small boat aground. Her father checked and immediately phoned the coastguard. HERBERT LEIGH was launched at 12.50 a.m. in rough seas. By the light of the lifeboat's powerful searchlight the lifeboat men spotted the vessel at 4.20 a.m. and found a yacht called FAITHFUL. With great skill and considerable courage Coxswain Moore took the lifeboat towards the yacht and on the third attempt succeeded in the very heavy surf. One man from FAITHFUL jumped aboard and the other was also rescued. FAITHFUL couldn't be towed because of the very poor conditions. For his skill and courage Coxswain Roland Moore was awarded the R.N.L.I.'s Thanks on Vellum. In 1982 HERBERT LEIGH ended her service in Barrow and went into storage as a reserve lifeboat by the R.N.L.I. at the shipyard of R. McAllister & Son in Dumbarton. She was formally handed over by the R.N.L.I at a ceremony at the BNFL Terminal at Ramsden Dock on arrival from Dumbarton. In 1990, she was moved to the Dock Museum and has never seen seawater since. She was donated to the museum by Brian Leigh-Bramwell, of Leigh’s paints (and Herbert Leigh’s great-nephew) at a cost of £18,000. Mr Leigh-Bramwell’s mother (Helen Leigh-Bramwell) named the boat in a ceremony in Buccleuch Dock in 1952. In 2005, funding was secured from the Furness Maritime Trust and from Barrow Borough Council in order to carry out essential conservation work. Almost £30,000 was spent and, the following year, HERBERT LEIGH was moved to the front of the museum site, behind the wavy wall.

As of April 2019 it was reported that Barrow-on-Furness Dock Museum has commissioned the refurbishment of the vessel.