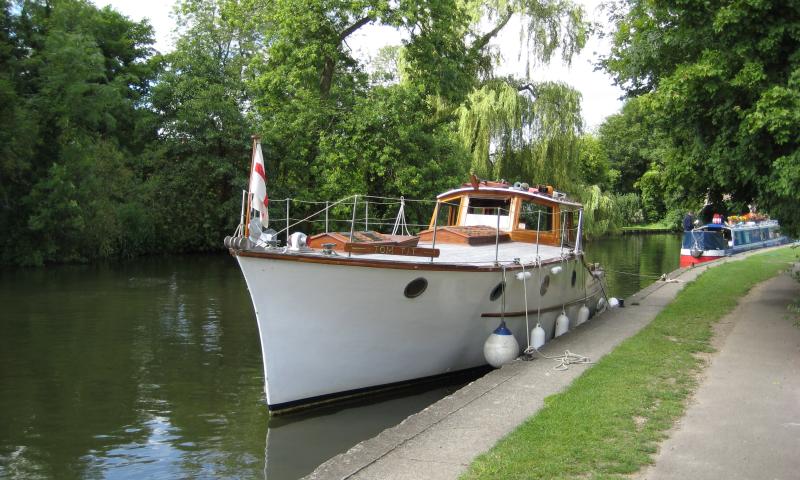 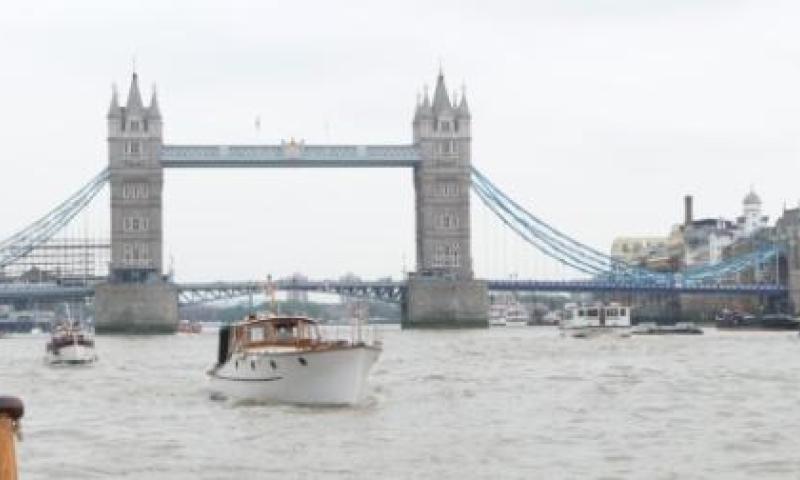 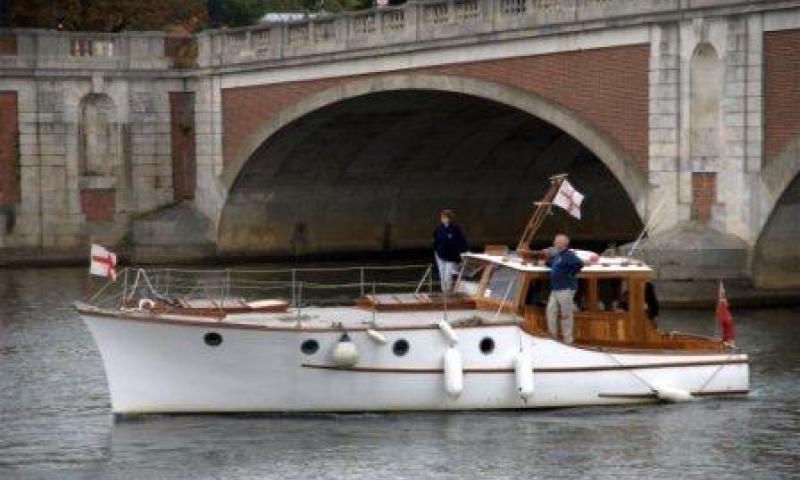 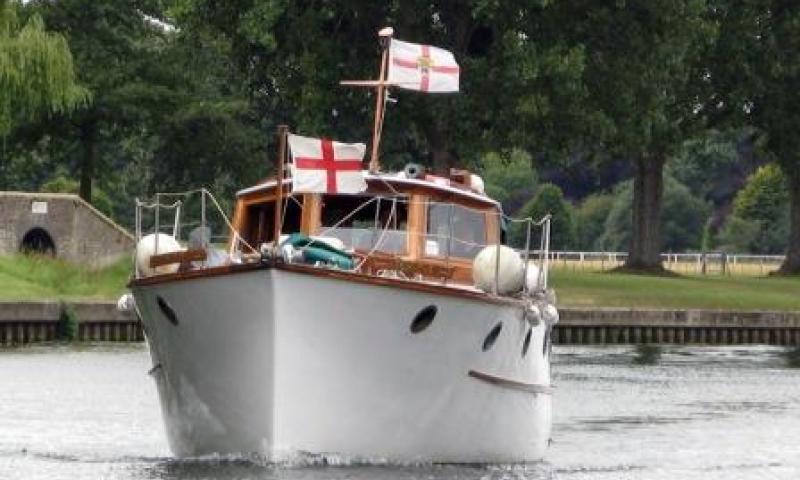 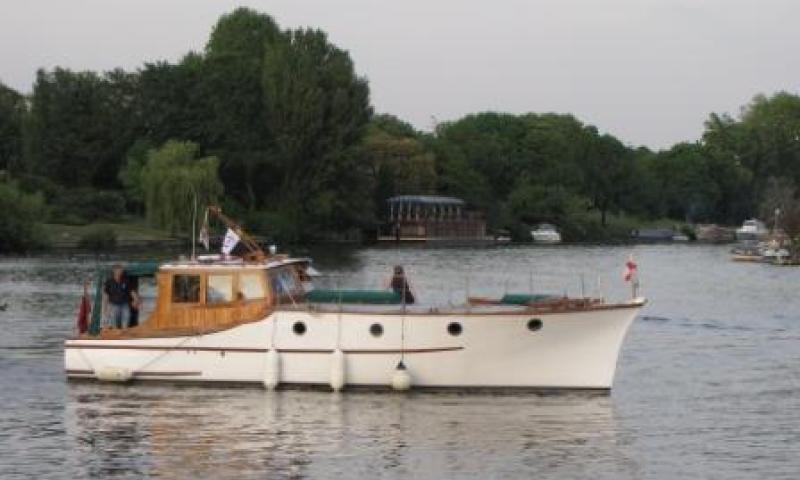 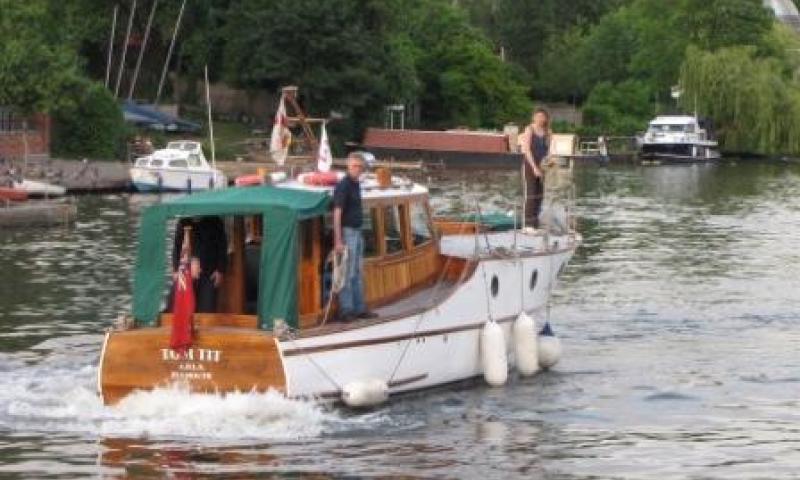 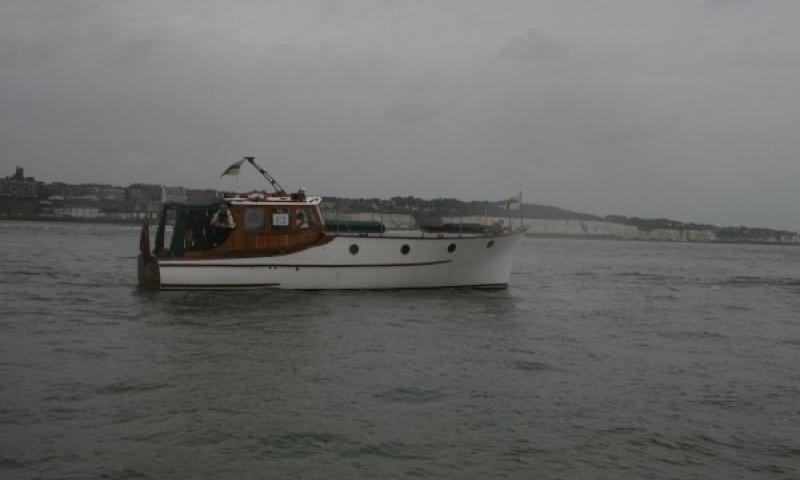 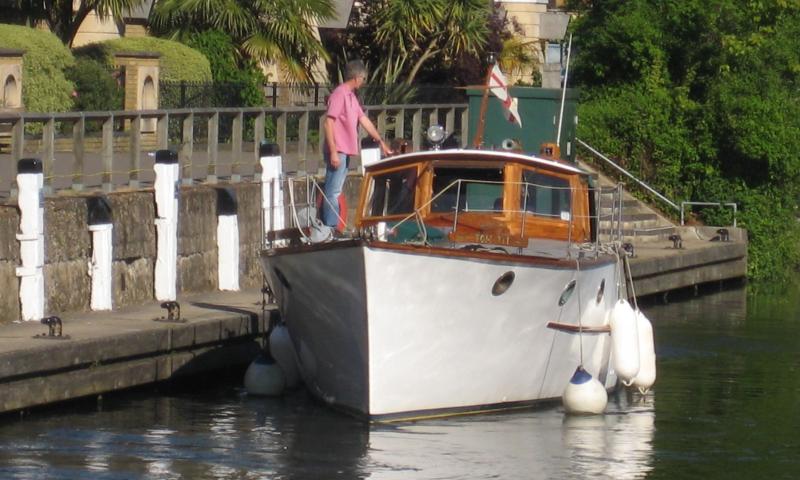 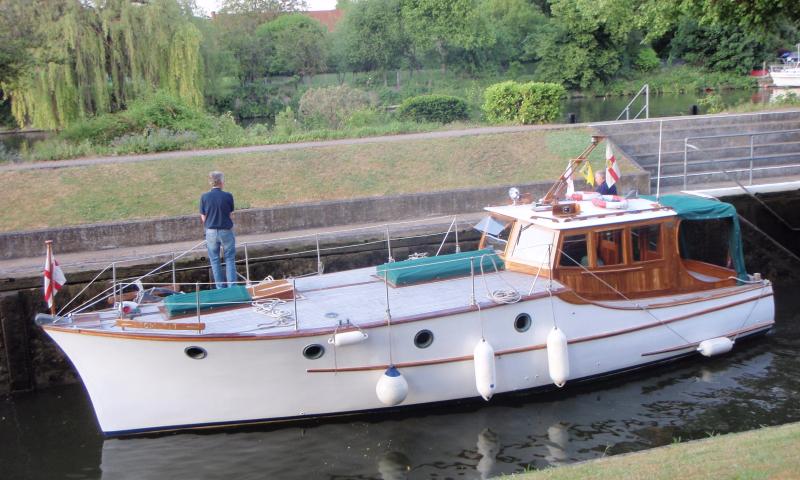 TOM TIT was built by K R Skentelbery of Plymouth to the specification of Mr J A Hughes a wealthy publisher who had a holiday home in Salcombe. His requirement was for a coastal cruiser, 40 feet in length, with a distinctive flared bow for good sea keeping and a wide beam of 11feet 3 inches to provide a spacious saloon. The hull and deck were solid teak with a mahogany wheelhouse. Twin Morris Commodore 36hp petrol paraffin engines were installed. She was launched on 1st of June 1938 and that month she was reviewed in Motor Boat and Yachting Monthly. Below decks featured a Persian carpet, velvet upholstery, Lloyd Loom chairs and an antique walnut writing desk (Skentelbery’s sawed the legs off to make it fit). She had all the latest appliances – an ARC radio, stainless steel sink and bottled gas powered refrigerator, stove and Ascot water heater. Upon the outbreak of war she was requisitioned by the Ministry of War Transport under the Net Charter Parties Agreement for the sum of seven pounds and ten shillings. Her immediate role was general harbour duties at Plymouth. In May 1940 she was stationed at Ramsgate in preparation for Operation Dynamo. It is not known who set out with TOM TIT on her first trip towards Dunkirk, only that she suffered a fire and had to return to harbour. Two local brothers at the cinema, Ron and Alan Tomlinson, were destined to take her to Dunkirk. Ron recalled halfway through a film, a flash came on the screen: anybody in Ramsgate trawlers, please report to the Admiralty office at once. They joined the fishing boat TANKERTON TOWERS on which Ron was the engineer. At Dunkirk, rope fouled the propeller and her engines seized. She was towed back to Ramsgate with French and British soldiers aboard. The were determined to return and Ron recalled - as we neared Ramsgate West Pier, I said to Alan: get ready to jump, there’s a boat moored on the end of the pier – we’ll take that. As we approached the vessel TOM TIT, Alan jumped aboard and started the engines; I followed him and let go of the ropes. As we came round out of the harbour, my elder brother Fred, who worked for Claxton shipwrights at the time (as did Alan), saw us and shouted: bring it back - it’s been brought in on fire, but we ignored him and went to Dunkirk. I was concentrating on going into the pier. I didn’t moor up; I just kept the engine running and let them jump aboard. As soon as I got a boatload, I went to the nearest ship, dropped them and came back in. I just keep filling up. I had them sitting in the cockpit and on the deck. I couldn’t say how many, 40, maybe 50. One poor lad could hardly walk, so we took him down to our cabin and I thought he might as well have my bunk. But when I looked round, the cabin was absolutely full. We ran from the pier to any ship that we could get to, taking the troops off - I should think we made approximately 16 trips. We came home in the early hours of Monday morning just as the Germans were taking Dunkirk harbour. When I got back to Ramsgate harbour, I feared that I would be in serious trouble for stealing a boat, but when I saw the Commander, I was commended highly for my bravery. On 8th of June 1940, TOM TIT became a motor boat in the Auxiliary Patrol. In February 1942, she was transferred back to Plymouth for miscellaneous duties. In 1945, she suffered another fire whilst in harbour and was scuttled to extinguish the flames. She was raised, repaired and continued in service until 4th of November 1945. Shortly after the war, TOM TIT was returned to Mr Hughes. She changed hands in 1952, 1956 and 1964. Lloyds Register records that her port of registration remained at Plymouth and her moorings as Salcombe until 1973. In 1973, she was bought by a Mr Stephen Lowe (son of Arthur) and Mr David Dagley who initially moored her at Swan Island, Twickenham on the River Thames. They moved her to Ramsgate in 1977. Here she was to sink at her moorings yet again as reported in the local newspaper on 1st November 1977. In 1985, TOM TIT was sold to Mr Alan Patterson who also kept her at Ramsgate. In the early 1990’s, she was languishing on the hard at Dover and had fallen into disrepair. In 1994, she was rescued by Mr John Hayes who had the boat restored by John Caddy Boat Builders of Weymouth. The project took two years. The Bournemouth and Poole Dunkirk Veterans Association attended her re launch in 1996. Since then she has been kept on the Thames. In 2008, TOM TIT was acquired by Trevor & Alison Phillips and is moored at Thames Ditton. In 2010, she took part in the 70th Commemorative Cruise to Dunkirk. As an active member of the Association of Dunkirk Little Ships, she attends the annual commemorative cruise, Thames Traditional Boat Rally and Thames Veterans Cruise.