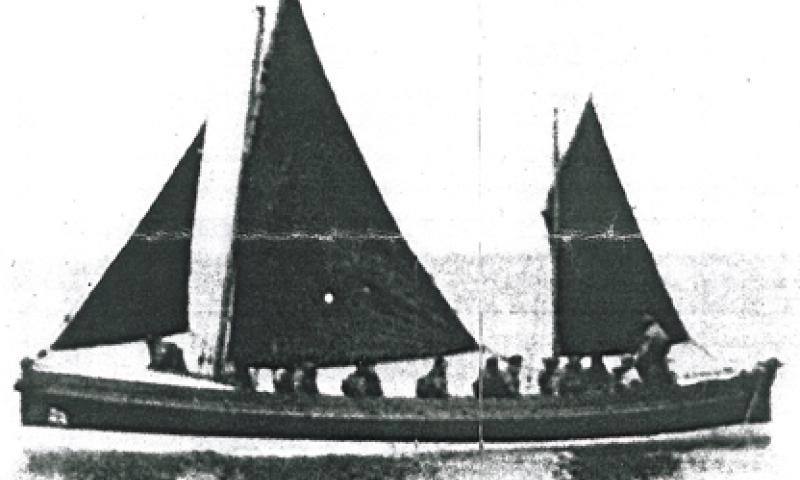 CHARLES HENRY ASHLEY (RNLI Official Number 583) is a standard 38 foot Watson Class Pulling and Sailing Lifeboat built in 1907. She is a monohull constructed in wood, using cross-diagonal planking with a double ended stern, and a single centreboard. She has an iron keel along with two drop keels, and is steered by means of a retractable rudder. She was motorised in the 1960s, but has now been returned to her original unpowered state.  In 2006 much rotten wood was found within the hull, affecting good timbers, although her original hull was basically sound. The vessel was extensively refurbished between 2007 and 2008 with Heritage Lottery funding. Weak and damaged planking on hull and end-boxes, sections of keel, gunwhales and stern posts were replaced. She retains her original cross diagonal planking and centreboard. The hull has been sheathed in glass fibre sheet and impregnated with resin. The keel iron was removed, de-rusted and replaced. The rudder has had two stainless steel strengthening plates fitted. Her cork and ash belting was also replaced and her blue and white oars repainted.   She is rigged with a jib, a dipping lug mainsail and a dipping lug on the mizzen mast, and fitted with twelve rowlocks, six on each side.

CHARLES HENRY ASHLEY was built by Thames Ironworks and Shipbuilding Company, Blackwall and designed by G L Watson.  She was the thirty-eighth of forty-two standard Watson Class Pulling and Sailing Lifeboats to be built and was in service from 1907 to 1932 at Cemaes, Anglesey, giving her local associations to this area. During that time she was launched on service seven times, but she is not credited with saving any lives. She saw only very local service; around a dozen lifeboats were in service in Anglesey at the time, and there was a large lifeboat station nearby at Holyhead.  Detailed plans for this type of vessel survive at the National Maritime Museum.  There are also early paintings of her, records including the names of her crew whilst in service and a number of photographs.  She has been recorded on the National Register of Historic Vessels since 2009.

CHARLES HENRY ASHLEY is open-decked, carries two masts, fore and aft, and is Bermudian rigged.  Her hull is built from Honduras mahogany.  As a standard Watson Pulling and Sailing Class Lifeboat she was purpose-built, with her design was well suited to the waters where she would operate. As an operational vessel returned to her original configuration she has graceful lines when in full sail.  She is now fully operational again and used for training in her original home port of Cemaes where she served for 25 years.

CHARLES HENRY ASHLEY was built in 1907 by Thames Ironworks, London and was in service from 1907 to 1932 at Cemaes, Anglesey, before being sold and left in storage until the 1960s. She was then motorised and used for 15 years, but was later abandoned until the 1980s when she was adopted by Amlwch Heritage Trust to no avail.

She eventually returned to Cemaes, her original home port, where she has been totally refurbished and is now used for training.

Click here to see video footage of the vessel sailing out of Cemaes Bay.