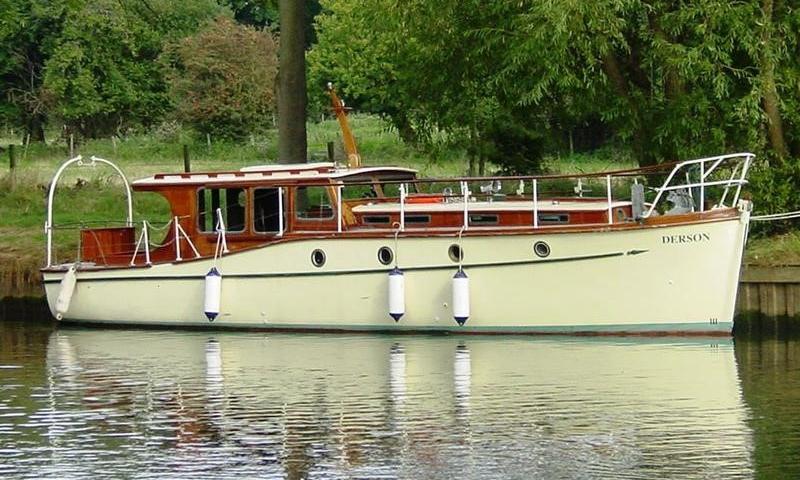 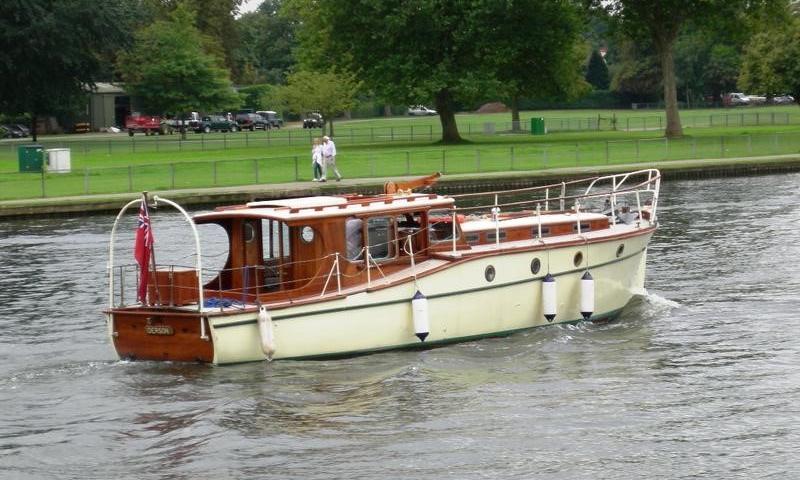 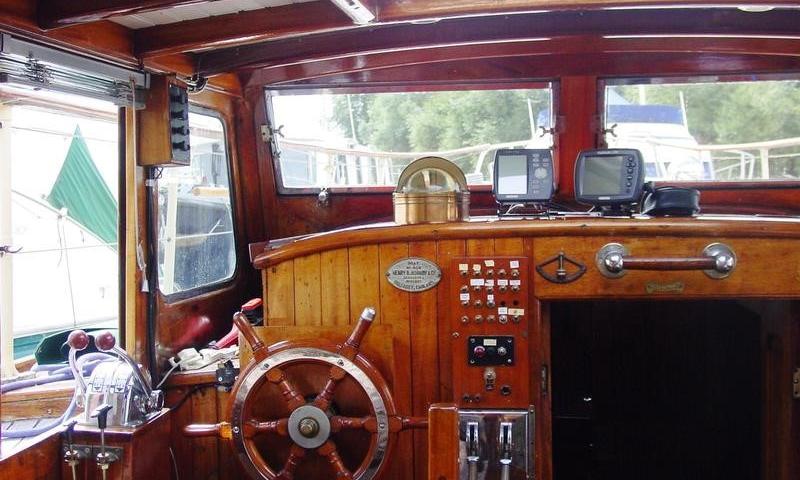 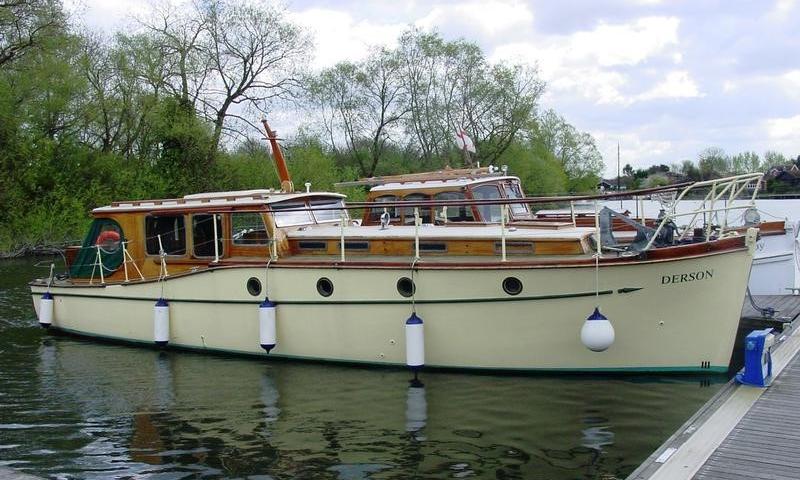 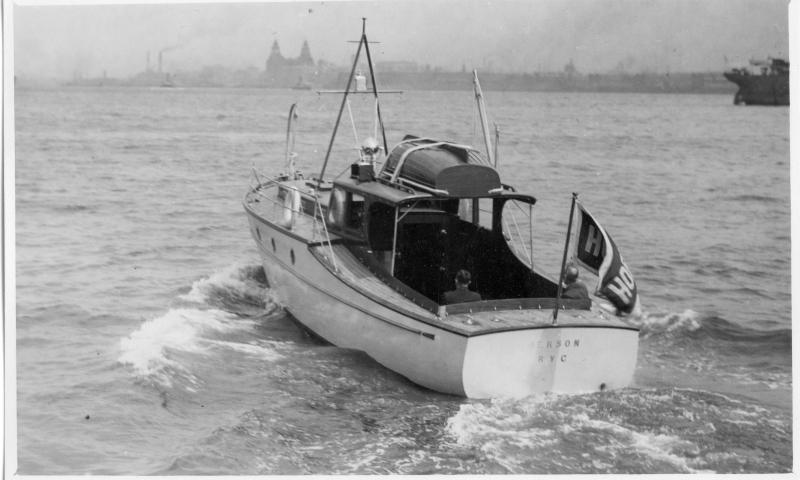 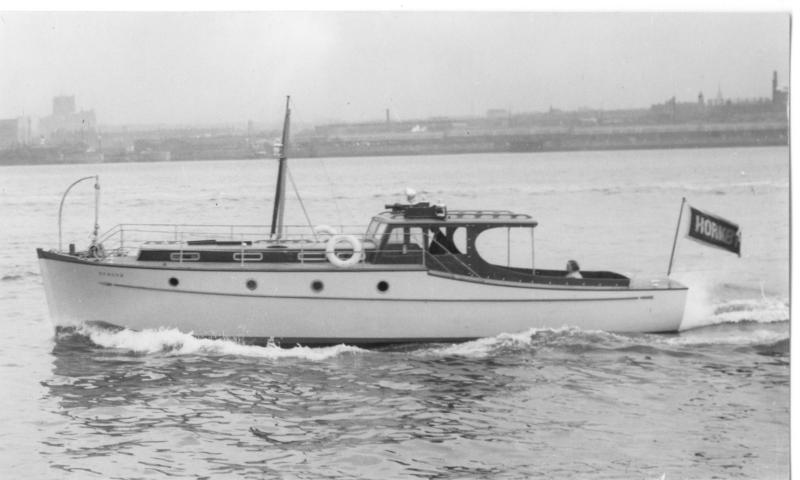 DERSON is a twin screw motor yacht built in 1937 by H B Hornby of Wallasey and is at present based on the River Thames. In 1937 Councillor T Harold Platts of Colmore Circus, Birmingham owner of the Raven Hotel, Droitwich-Spa and Palace Hotel, Rhyl where Derson was stationed after launching. Harold Platts commissioned yacht designer Arthur H Comben to design a motor yacht of 'staunch construction and absolute seaworthiness' Arthur Comben designer of many Staniland of Thorne motor-yachts proposed a 38ft twin-engined vessel of traditional construction incorporating two convex iron arches. 9ft apart and having 45 degree cross knees they provide immense strength and support to the clerestory cabin roof to the gunwhales, stringers and keel. The design features a gradual sweep in the break-deck thereby avoiding the usual problems associated with break-deck vessels of this period. Full headroom was specified throughout of 6ft 3ins, with the only modification since built being the enclosure of the wheelshelter offering additional practical accommodation with still a generous aft cockpit for entertaining and alfresco dining or a glass of wine while watching the sunset. Built by the well known Henry Hornby Yacht Yard, number 409 and registered in Beaumaris. Derson featured in various publications including a three page illustrated article in the Motor-Boat magazine in July 1937. Shortly after the outbreak of the war Derson was requisitioned by HM Government for coastal patrol based in Conwy. In the early 1950's E E Marsh owned Derson mooring her in Beaumaris, G B Crossthwaite was the next registered owner in 1953. He re-engined Derson in 1956 replacing the original 6 cylinder Morris petrol engines with 6 cylinder Gray's. In 1958 H L Foster acquired the vessel moving her to Wyre Yacht Club in Worcestershire on the Stratford Avon, meanwhile fitting 40hp diesel engines. In 1960 R H Hopkins bought Derson moving her down river to Tewkesbury. Donald MacAlister was the next registered owner taking Derson down to Falmouth where she remained in his ownership until 1970 when H C Binns bought the boat. Bill Binns kept Derson first in Falmouth and later in Dartmouth before selling in 1984 to Robert Shepherd of Woodsetton. Bill often won the annual trophy at the Severn Motor Yacht Club for the longest distance travelled during the season. In 1990 Stewart Phelps of Great Malvern and Patrick Gamble of Dymock individually owned Derson before F S Penman in 1992. Terence Griffin of Tamworth bought the boat in August 2005 selling her a year later to Michael Moerel of Paris. Derson was transported to Paris and became a pied de terre in the City for a year. In 2006 after returning Derson to the UK the current owner bought the boat. In the present ownership Derson has over, the past ten years been brought up to a high standard throughout with professional work carried out by Dennetts Boatyard, Laleham, s. Carvel 1.25" pitch-pine planked hull all copper fastened to oak frames and steam bent timbers. Substantial oak deck frame with original solid 1.25" teak laid decks. Varnished mahogany superstructure and cockpit. American elm single length keel inset with 15 cwt iron ballast. Slightly raked straight stem with flared bows. Raked transom stern. Round bilges with bilge keels.